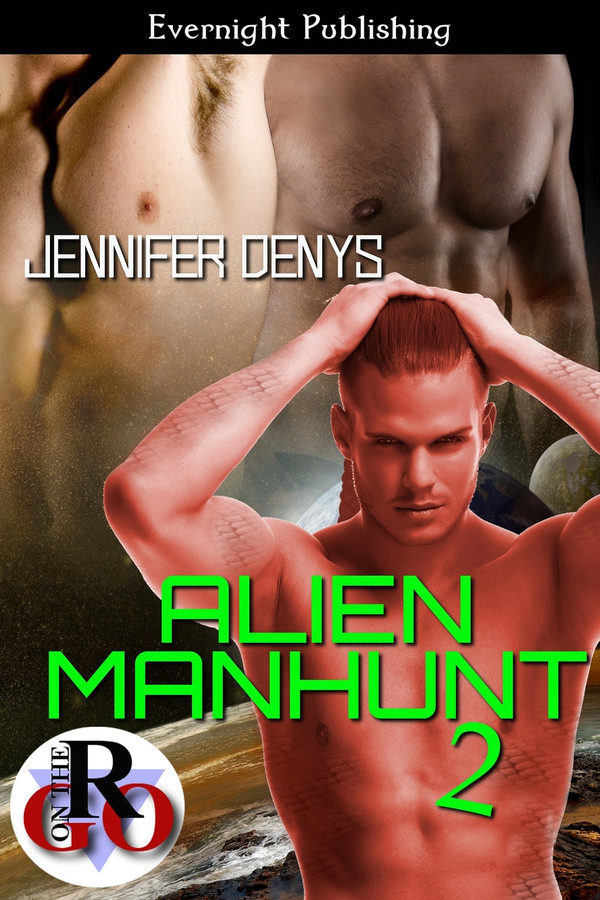 Planning to let his mates act out their fantasies, Suva takes them to his home planet of Espoornia and lets submissive Taran chase Dominant Greg for a change—with a sneaky scheme to end it all in a marriage ceremony.

But Suva’s plans go awry from the start and one of them is hunted for real. Worried about the one captured being sold or killed, the remaining two have a hard time searching for the other. But then they find themselves in danger, too. Will they escape? Will they ever be free to marry?

“No way am I running around naked.”

The two others also standing in the immense forest looked at Greg in astonishment. He knew he sounded petulant, however, he hadn’t expected Espoornia, the home of his elf-like alien partner, Suva, would be so damn cold. It was nothing like their home on the space station, Orion One, which served as an administration, communications and military point for the various nations that co-habited that area of the galaxy. Even his birth planet of Earth, which he hadn’t visited for some years, was far warmer. Unless you were at the poles of his home world, of course.

He shivered and resisted the urge to cup his cock. “If I run around with no clothes on my dick will go blue. Jeez, it will do more than that—it will freeze and drop off!”

Suva said something in his own language and stormed off, his long yellow coat flowing behind him as his lengthy strides took him back to their car shuttle. A densely covered planet, it was impossible to fly from one place to another so the only transport was land-based. Even taking this vehicle involved a journey of many hours.

Taran, the third in their relationship, a reptilian from the planet Cinattra, gave a quirky smile, his dark eyes twinkling in amusement at Suva’s outburst as Greg glanced in his direction. The alien looked away, as if he didn’t want to repeat the Espoornian’s words.

Greg huffed. “So what did Suva just say? I am guessing he swore at me, or something?”

On the space station, translations were broadcast immediately if anyone spoke anything other than the galactic language. There were no such facilities in the middle of the cold—but stunningly beautiful—forest where the trees rose to impossibly soaring heights. It made Greg dizzy looking up.

Taran laughed and Greg studied him, amazed that the youngest of the trio could go bare-chested in this temperature. He might be presenting his gorgeous red, muscular chest, as was normal in his culture, the scales on the sides of his body showing above the belt, but Taran was from a hot world, which made it even stranger to Greg. At least Taran wore leather boots to match his black, jewel-encrusted skirt and the band around his neck. The latter was a sign of his submission.

The Cinattran nodded. “Yes. It was something about your manhood being too small to drop off, and even if it did he would stuff it up your soft human backside.”

Greg’s face tightened. But he couldn’t stay angry for long, and a chuckle escaped him. “I’ll show him too small one of these days!” Walking over to Taran, he ruffled his partner’s long red hair, tied back in its customary plait, so different from his own closely cropped hair. Greg was the dominant one in the relationship, having picked up both guys at a bar on the space station. Suva could switch between roles, being submissive with him while dominant with Taran, who was submissive to both of them. Their relationship usually worked well.

Except everything had changed.

Book Review The second installment of this naughty threesome in space-opera style is even more fun than the first because there is more information about the three men, and they are now on the Espoonian’s homeworld. The name of the game has changed, but Greg, Suvan, and Taran are in for as many surprises as in book one - just of a different kind. Oh, and if you haven’t read ‘Alien Manhunt 1’, I think you should do so for your entertainment, as well as to avoid seeing spoilers for that first story in this review. Suva takes the lead in this book, and he wants to introduce his two lovers to his home planet. Not just that, he wants to fulfill Taran’s fantasy of being the dominant partner for once, and to do that, he sets up a manhunt where Greg is the hunted one – just like in the fantasy Taran indulged in before. But Suva is sneaky – he hasn’t told the men he thinks of as his mates that he is telepathic, nor that he plans to make the threesome he hopes for at the end of the hunt fulfill the conditions of an Espoonian marriage ceremony. No wonder Suva is in trouble by the time the others realize what&#039;s going on! Taran is excited to be the dominant partner in this round of play, but there are a few things that Suva has not considered. When things begin to go wrong, Taran isn’t helpless though, after all, Cibattans have certain abilities that stand him in good stead whether he is the hunter or prey. Greg is more than a little uncomfortable with the prospect of having to submit to Taran at the end of this particular game they are playing. But he is also beginning to realize how much Taran and Suva mean to him, so he is happy to play along. Until it gets serious – and his reactions to Suva’s subterfuge are hilarious. If you like space opera that doesn’t take itself too seriously, if you enjoy reading about interspecies shenanigans that include some cross-cultural misunderstandings and their consequences, and if you’re looking for a read that is entertaining, hot, and very funny in places, then you will probably like this short story.

The feelings that Suva, has him contemplating happily ever after and in doing so has decided to return to his home planet. Wanting to fulfill his lovers fantasies and create a pleasure so imaginable they would be receptive to...... . What started as pleasure has become a nightmare, what&#039;s more he placed both of his beautiful,sexy,and complex lovers lives in jeopardy. Can he save them or will he feel only pain at the lose of his mates? Jennifer Denys has to in my opinion the best MMM erotica writer. The fact you this is short and so descriptive is nothing short of amazing. To her credit the writing is outstanding! Gave the book 5 stars because I was mesmerized by the story and completely on edge.