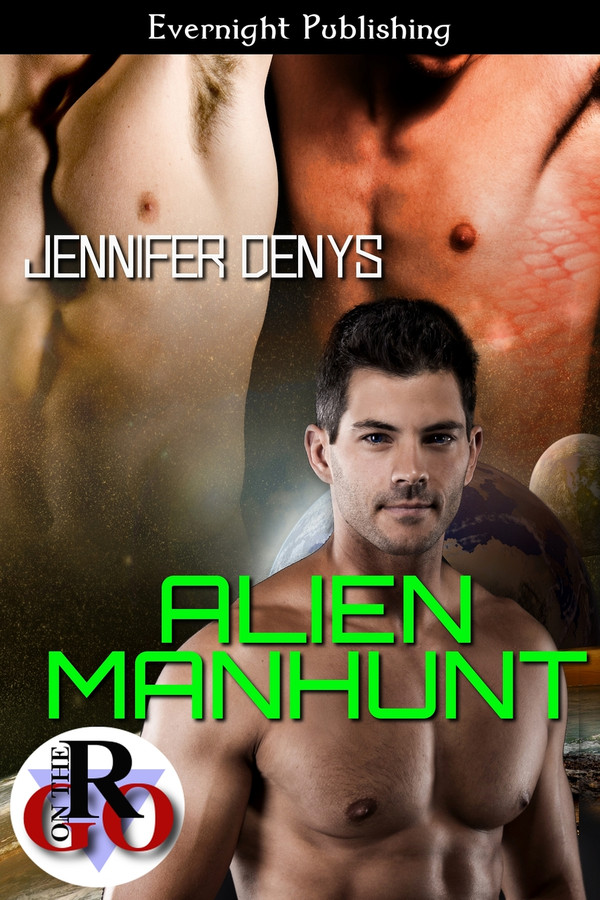 Abducted and forced to run for his life in a manhunt comprised entirely of human men, Greg spies the two aliens fiercely competing to capture him, and he begins to lust after both of them.

Taran, a hunky humanoid/reptilian, and Suva, a tall, beautiful, slender creature, are both desperate to get to the human first, while dealing with a mutual attraction.

Back on Earth Greg was the dominant one, but the situation has now changed. What do they want with him? Will they sell him, torture him, or make him into their sex slave? Each one keeps their innermost desires secret. But is the truth finally out?

It had been a hard run to get to this small town, so it was a good thing he worked out in the gym. Running a nervous hand through his dark hair, Greg hoped none of the hunters was following him. He glanced around, looking for someone who could help, hoping they would protect him from those chasing. There didn’t appear to be anyone around.

Greg darted into one building, opened a few doors, and grimaced. On the one hand, it was good that the town was deserted, as anyone living there might have recaptured him. It had been a calculated risk when he spied this place. On the other hand, there didn’t appear to be any vehicles he could steal or any method of communication, as the buildings appeared to have been stripped bare.

“This was a waste of time.” He bit a nail as he considered his options. “Can’t stay here. I could try hiding out in one of these rooms. Nah, that’s too obvious, if anyone is on my heels. Dammit. How can I get to a big city to get away?”

Running up the street, he tried some random buildings, running through one shop and out the back, cursing when it was just as empty as inside. Noticing a low shed-like building, he climbed onto the roof to spy out the vicinity. Swiftly clambering onto the flat surface, he trotted over to the edge.

Greg dropped to his stomach in a trice, keeping his head down. There were two aliens approaching. He gingerly lifted his head again to suss them out. The one in front was staggeringly tall and extremely beautiful, with golden locks that swung around his shoulders as he ran. He remembered seeing him back at the compound before they were released. The alien’s deep amber eyes had locked onto Greg’s and he’d been sucked in, very nearly laying down then and there, and saying, “Take me.”

Back in the present, Greg’s chest felt tight and he breathed deeply to ease the sensation. “Forget it. You can’t have him. He probably just wants you to be his servant, his slave.”

When he looked at the other alien who was fast catching up with the first, Greg’s whole body tensed in shock. The one following was so muscular and sexy Greg felt his cock throbbing in anticipation of a tussle in bed with him.

With a sigh of frustration, he slithered down the roof, landing heavily on his feet.

“Stop it, you idiot. You can’t be attracted to aliens who want to capture you for God knows what reasons.”

He was still in the dark as to why he had been captured originally. None of the red-skinned aliens talked to him. This setup where they let him go only to chase after him reminded him too much of hunting for animals back home.

Dammit. They probably want to kill me and then eat me.

Greg closed his eyes in horror at the thought, and leaned back against the wall to avoid pissing himself with fear. He focused on his breathing, calming himself. Except it didn’t work. His heart pounded, and sweat trickled down his back as he tried to think through his choices.

“Okay. There are other things they might do, like take me prisoner. Maybe this hunt is a way of showing who is the strongest.”

He laughed harshly. This could be an intergalactic version of a game show with the winner getting him as their prize. It was such a contrast to his normal life. Back on Earth he was the dominant type, the one who chased after others. One night stands were something he often did in the past, his pick-ups doing exactly what he told them to do.

That made him sit up and think. “Christ, whoever captures me might want to make me into a sex slave!”

Part of him really liked the idea of being subjugated by either of the two hunting him. Better them than some of the other aliens who stared hungrily at him in the compound. There was one who looked like a giant pig in leathers and another with a mouthful of sharp teeth in his crocodile-like body.

Having said that, from the looks of the muscular alien chasing him he appeared to be reptilian, too, but since he hardly wore any clothes Greg could see his scales were limited to the sides of his red-skinned body. Okay, so he also had a tail. However, the rest of him appeared human-like, if somewhat demonic.

The alien looked rather short, probably shorter than he. Greg reckoned, with the creature’s bulging muscles, that once caught, Greg would never get free. He’d be held down, his wrists tightly clasped as the reptilian lowered his wide chest onto his, crushing the breath out of him. He wouldn’t be able to move beneath him.

Does he have fangs? Greg imagined the alien biting his neck, his chest, his nipples, causing delicious torment as he went. In an instant, he’d be flipped over and the demon would start biting his buttocks, moving his hand between Greg’s legs to tightly clasp his hard throbbing cock.

This short story in space opera style features an abducted human running for his life on a strange planet. He is the prey of a Cinattran and an Espoonian whose species used to be enemies and who are each determined to get to him first. There is a hot threesome once Greg is caught, and a fun twist toward the end. While the characters are quite interesting in their own right, this story is more like a fun fantasy than serious science fiction. Keeping that in mind, I was able to enjoy it and all the naughtiness it offers. Greg is a human being hunted by two aliens, and the sense of desperation as he tries to escape had me involved right away. He is not used to being prey and has no intention of being caught. Even in this alien environment there are a few advantages he has over the aliens. The planet may be a hot desert, but there are some things he is better at. Just the thought of being used for whatever purpose these aliens have in mind motivates Greg to do whatever it takes to get away. Taran, a short, strong reptilian with red skin and a few scales along his sides, has never been able to catch a human before this. Hunts for humans are a regular occurrence on his planet and he is very eager to succeed this time. He may be young, and nobody expects him to succeed, but he is determined. Not just any human will do either – he has scented Greg, and only he will do. Never mind the annoying Espoonian, who also seems intent on catching Greg and no other. Suva, who is tall and slender and looks like an elf, is the most mysterious of the three. He can keep up, even get ahead of Taran frequently, yet he seems less concerned about the outcome. His point of view doesn’t come into play until the very end, and he turns out to be the key to what is going on… If you like alien abduction fantasies, if a threesome between different species seems like a naughtily fun idea, and if you’re looking for an entertaining, hot read, then you might like this short story.

This was a really hot short story! I loved the differences between the guys, but also the way they all fit together so well. This was very well written and it was so good and so hot I couldn&#039;t put it down!

Interesting. Love the difference in characters. What happened next? .

Well written and very enjoyable. It&#039;s a light and sexy fast paced book that is hard to put down. There could almost be a sequel if the author chooses to. This is one book that I would recommend to friends.