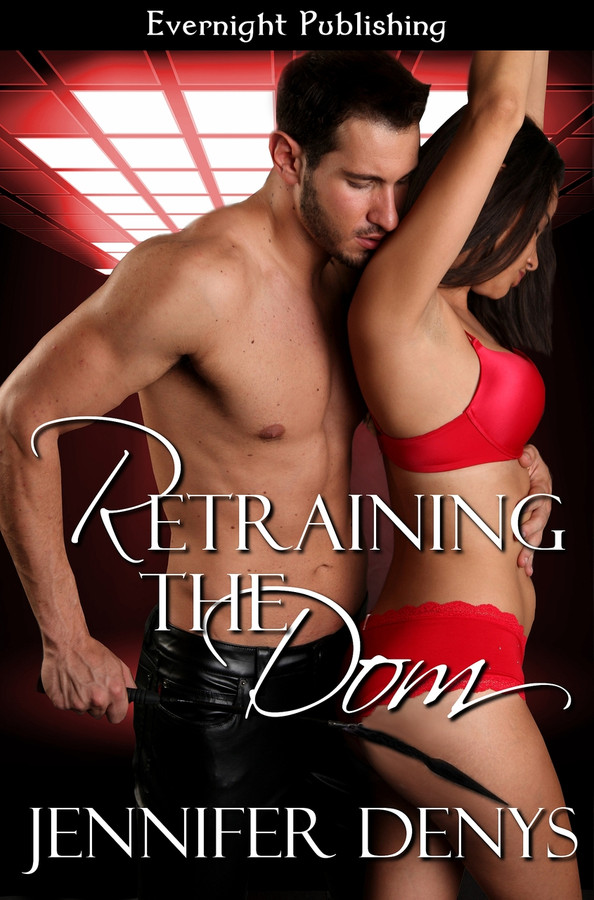 Club Allure has a retraining program for Doms, and Trey must go on it. However, he is much too strong a Dom to let anyone else order him around. The owner of the club comes up with the idea of asking an older and extremely experienced Domme to retrain Trey, and try to understand his hidden past.

Unlike the Dom, Olivia sticks to the rules, and is also very imposing physically. What no one knows is that Olivia is a sub at heart, but through circumstances became a Domme. She has to try to stop Trey topping her, but he is everything she ever wanted in a Dom and a man, except too many years have passed.

Meanwhile, Trey finds himself having fun with a woman for the first time ever and gradually recognizes the sub in Olivia. But when Dom challenges Domme, who will win?

“Do you know how many years I’ve been a Dom?” He walked toward her, coming face to face as he snarled at her. She held her ground, tilting her chin up, metallic grey eyes full of anger against her own, light brown with orange tints. She’d been told in the past that her eyes were warm. But now she hoped they reflected strength and determination.

“I do know you’ve been doing this a long time. Maybe that’s the problem. You need to be reminded of the basics.” She regretted that as soon as it was out of her mouth.

“The basics!” He was clearly shocked.

Dammit! If she wasn’t careful he’d leave without a backward glance, and that was exactly what Sean was trying to avoid. But Olivia had to be firm on this point. She crossed her arms in an attitude of authority. “Yes. By going over standard techniques I will be able to see where your strengths and weaknesses lie.”

“Oh, I can show you my strength any day.”

Of that, I have little doubt.

“And can you tell me your weaknesses?” She wagered that he needed more time to answer that.

Trey turned away to pace, and Olivia relaxed her stance, leaning against the desk for support, but making it look like she was being nonchalant.

“According to you—and Sean—I hit a bit too hard when punishing a sub from time to time.”

Olivia shook her head. “That proves you need retraining when you can’t see your own faults.”

He snarled at her. “And you don’t have any?”

“Yep. But I’m not the one being retrained.”

She decided to try the “buddy” approach again. “As I said before, we can learn from each other. You are the expert with impact play, for example. You can demonstrate how to be firm, yet subtle.” That was a wry suggestion, as he was anything but.

Trey frowned. “So how will I show you that? You gonna watch me with a sub?”

“What, in front of everyone else?”

“With everyone knowing I’ve been a naughty boy?”

She was warned by the biting sarcasm in his words. He moved toward her again. His movement was deliberate—and threatening. If she had been a sub she would have known for sure she was in for a vigorous punishment. There was something about a Dom about to admonish his sub that was palpable.

His voice was menacingly quiet. “You think you are going to tell me how to wield an implement? Ha!” Trey continued pacing, like a caged tiger, and she breathed a silent sigh of relief. “And if I get it wrong, according to your rules, you are going to show me up in front of the Club’s entire membership. Humiliation—is that to be my punishment?”

Trey had stopped directly in front of Olivia, his face full of fury. She swallowed apprehensively, but before she got a chance to respond, Trey flung his bottle on the table so forcefully the beer slopped all over the paperwork, drowning it in a fizz, as he stormed to the door. He was so angry it slammed against the frame, and Olivia jumped.

“Fuck the lot of them. I’ll go elsewhere.”

Before he had a chance to charge through the doorway Olivia shouted after him, having regained her nerve. “When you don’t get accepted at another venue, you know where to find me. The offer of retraining is still on.” The likelihood was he would have trouble at other clubs as word will have gotten out. But whether he would let her retrain him was another matter.

The look he gave her on departing was pure hatred, and it made her shiver. If she ever chose to be dominated, he was someone who could do it.

this was a good book. plenty of action and strong characters. I wish that there had been just a little more development here but for the most part I was happy with this book

Trey is a hot and sexy Dom who is a member of Club Allure. Everything is going good for him until he loses his control and goes overboard. Now Trey has to go under a retraining program. Trey is smart and after a little calming down he makes the best of the situation at hand. Olivia is a Domme at Club Allure. The owner thinks that Olivia would be best way to retrain Trey and keep from alienating him. Olivia is also a sub at heart and training Trey allows her to enjoy that side of her. I loved how strong Olivia is. She stood toe to toe against Trey and did not back down. The chemistry between Trey and Olivia is scorching. The sex scenes were searing. I loved how as Olivia tried to train Trey. He was always thinking of ways to get Olivia to open up and loosen up. I liked that Trey can see right through to Olivia and instead of embarrassing her by requesting a “real” Dom he agrees to be ‘retrained” by her. Retraining the Dom is the second book in the Battle of Wills series by Jennifer Denys. While this book is part of a series it can be read and enjoyed as a standalone novel. I found this book to be very well written. It was a great book that allows you to see how these two made a relationship work between them. The main and secondary characters were interesting and realistic. Overall, this was a great book. I will be picking up the first book in the series shortly.

Trey had to go into the retraining program and somehow Olivia ended up being his trainer. Olivia got Trey to look at things from a different perspective and they both started trusting each other more. This was a great book showing how to dominants could work together. Sean was funny and so great pairing them up. This is definitely worth reading.