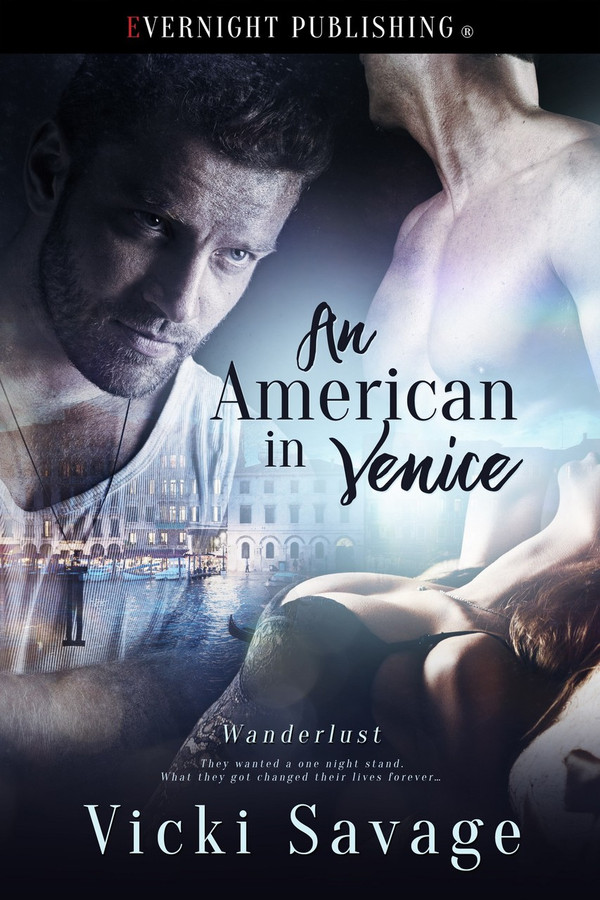 They wanted a one night stand. What they got changed their lives forever…

Years ago, Amber Clark moved to Venice hoping to leave her troubled past behind. When two handsome co-workers approach and ask for more than friendship. Torn between desire and insecurity, Amber must now face her past mistakes if she ever hopes to take hold of the future she craves.

Loving a woman brings Cal Di Centa and Enzo Gatti closer together, and giving her pleasure strengthens the bond they have with each other. At first they see Amber as a simple conquest, but as their seduction progresses, their motives become more than concrete. Now they want Amber for more than just one night, but loving her means exposing dark secrets, and neither are sure if she can handle the truth about their relationship, or why they need her in their lives.

I shifted in my seat, trying to alleviate some of the growing pressure between my legs. “If you are going to live with us, then you should know everything about us.”

“Did she?” Enzo turned on the sofa until he faced her. Excitement lit his features, and I silently motioned for him to calm down. Just because she knew of someone who had participated in a ménage didn’t mean she was interested in one herself.

Amber smiled at Enzo. “Yes. I was quite curious about it and asked a lot of questions. In the end, I decided it wasn’t for me.”

“You seem disappointed,” I said, directing her attention back to me.

She furrowed her brow. “It’s a long story. I met someone…”

“And he wasn’t up to the idea of having another man in the bedroom,” I guessed.

“No. In fact, he didn’t like kink in the bedroom at all.” She blushed and looked away.

So, she was a closet submissive. The news made my cock ache, and I adjusted my position once more in an effort to ease the pain. God, she was so beautiful, and to find out she was interested in kink! It was almost too good to be true. Everything about her called to me. It was difficult not to gather her into my arms and kiss every inch of her creamy skin.

“We’re not freaks,” Enzo muttered as he fisted his hands.

“I’ve stopped going to clubs, but every once in a while, I—I miss them.” Pink stained her cheeks as she averted her gaze. “Sometimes I think about going back. There are things I was too timid to try back then, but now that I’m older…” She hesitated and then shook her head and chuckled. “It’s silly, really. I’m probably much too old for that sort of thing now.”

“Don’t be ridiculous,” I said as I inched closer. “Age is just a number. Enzo and I learned that it’s never too late to try something new.”

Enzo nodded in agreement when she glanced over at him.

“Honey, I know so.” I eased my fingers over her bare arms, loving the way her skin felt under my fingertips. “Now tell us, what did you want to try?”

She cleared her throat, then looked up at me. “I have this fantasy.”

I raised my brows when she didn’t continue. “And?”

“Back at the club,” she said as Enzo stepped closer. “I tried a lot of different things, but it had always been a one-on-one situation. I had always wondered…”

“You want two men to dominate you,” Enzo guessed.

She nodded. “You two ever go to the clubs?”

She widened her eyes. “You do?”

“I think we might be able to help you out with this fantasy,” I said.

“That is, if you still want to try it.” Enzo’s voice sounded hesitant and unsure.

I held my breath and waited for her to answer.

A Canadian in Paris by Vicki Savage