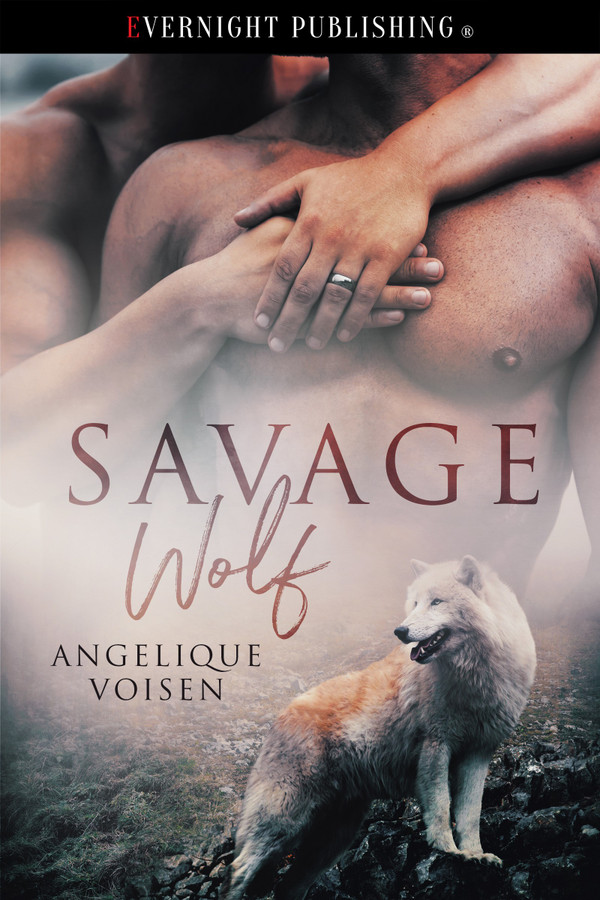 Finn Brenner’s time is up. To save his brother’s hide, he promised to give himself to a sadistic Alpha who only sees Omegas as toys. Finn’s having second thoughts but there’s nowhere to run. When it’s time to face the music, Finn is thrown into a hellish hunt where he’s the prize. The last thing Finn expects is a savior in the form of a savage black wolf.

Jakob Stone’s barely holding onto his humanity. He buried his grief and lingered in the skin of his beast. When he hears Finn’s cry for help he knows this Omega is the one he’s been searching for his entire life. Jakob would do anything in his power to keep Finn safe, even if that means going up against an entire pack.

“You take care of others,” Jakob said, giving his finger a squeeze. Finn didn’t protest or push Jakob away when Jakob ran his big and callused fingers up the length of his arm. Jakob rested the palm of his hand against Finn’s chest, his left pectoral where his heart lay. “It’s time someone else took good care of you.”

“Are you volunteering for the job?” Finn teased.

Jakob looked serious. “Finn, I will protect you from anything and anyone. I will make sure you are provided for. Anything you want, I’d provide. I will be a good mate to you.”

Finn clutched at the sheets. “Where were you, the rest of my life?”

He said the words unthinkingly, but his heart pulsed and ached. Finn always believed being born an Omega werewolf was a curse, one that would plague him for the rest of his life. He didn’t use to think that way. Back when Finn was younger, he’d been naive, a romantic. Finn had dreamed of a man just like Jakob, someone who’d spirit him away from his toxic home and they’d live somewhere in the woods, in a big house, hidden away from the rest of the world.

Jakob moved from the chair to the edge of his bed. Finn’s heartbeats escalated as Jakob leaned close and brushed his mouth over Finn’s. Finn bit down on Jakob’s lower lip by instinct, drawing blood. Jakob curved his lips into a smile, before closing his big hand on the back of his neck and going for the kill. Jakob plundered his mouth, all heat and bite.

Finn’s cock twitched under the sheet. Jakob could surely smell his need, but he didn’t care, because until that moment, Finn didn’t know kisses could be like this—scorching, all-consuming. Finn kissed Jakob back fervently, aware of Jakob moving one hand down his chest, his ribs and belly. Jakob curled his fingers around his shaft and began to move it up and down.

With his mouth held captive, Finn couldn’t do anything but take what Jakob gave him. He drowned, forgetting all about his problems. Then Jakob pulled his mouth away. Finn panted and stared up at Jakob, hoping the dominant shifter could see the need in his eyes.

“I was lost for a very long time, but you found me,” Jakob said.

This is not a bad little story, but man do I hate butthead alphas. Once again, the omegas have shown how tough they really are by standing up for themselves or by staying strong in the face of constant danger. No matter how fearful they were. Finn was an omega. To his father and brother, he was considered weak. When he lost his mother, all his brother and father did was gamble and drink and such. He worked and slaved himself to the bone, only for them to just blow it all away. Well, because of it, their father was murdered and they were on the run from jackals trying to kill them. And Finn finally finds out how low they could go. He was sold to another alpha to pay for their debt. Finn put it off as long as he could, but on his 21st birthday, Vito, the alpha, was waiting no more. And he was warned several times before the run, to be careful. Never in his life did he imagine how far Vito’s depravity went. He knew it was bad, but not this bad. Fighting for his life, he was saved in the nick of time by a huge black wolf. When he comes to, he finds out it’s his mate, Jakob, who’s been watching from afar. Jakob hates he waited so long to save his omega, but now it’s time for things to change. And hopefully, Jakob can keep his little one safe, while he does what needed to be done a long time ago. Never have I been so glad to see someone die. But that’s later in the story. And I can’t give any more than that away. Finn, gah I felt so sorry for him. Omegas get such crap for not being alphas. They’re considered weaker when in truth they are the strongest, because they have to survive such crap. I hated what Finn has had to go through. Then I hated it even worse when they got to the new pack and the way the alpha ruled. He was sadistic and an evil, evil shifter. He would do anything possible to make sure his word was law and that involved cheating, if necessary. Finn just couldn’t catch a break. I was so happy when Jakob found him. Jakob gave Finn a chance at a new life with someone he could love and be happy with, even with Jakob almost being Rogue. And Finn saved Jakob from being Rogue. Finn helped Jakob find himself again, when all he was was lost in grief and rage. They were perfect for each other. It’s a good story. I’m glad it had a happy ending. I hated what omegas had to go through in this story. But it’s that way with most. But that just makes me love the omegas even more. Because they push through and strive to fight for another day.

Finn had never got along with his brother or father, but family was all he had until their father was murdered and Finn had no choice but to honor an arrangement made without his consent, that he become part of another pack as one of their breeders. Jakob had been watching and waiting for two years while Finn got comfortable in his new home. When the time was finally right, Jakob knew he would claim Finn, no matter what other arrangements had been made. Can each man fill the need the other has? I found this to be a sexy and interesting short story. Finn and Jakob are both complicated characters and I was grateful the author gave them both a bit of space to get to know each other before fully committing to each other. Both Finn and Jakob have baggage and things in their past that they need to work through and while their mutual attraction and bond is undeniable, I feel it would have made things slightly unrealistic had they solidified the mating bond when they first met and came to know each other intimately. I felt this short bit of extra time helped make each characters really deepen and understand what they meant to each other – but it also helped me as a reader see how these two very different men with different issues fit together and how they might work in a longer-term relationship. Readers looking for a complicate plot or a strongly woven, action-packed story won’t find that here. This story had a number of strong and interesting characters and the relationship between Finn and Jakob, as well as the larger pack itself was the main focus. I was quite happy for this narrower focus – Finn and Jakob really were centre stage and the main part of what I was interested in so I was pleased they and their relationship was where the story focused mainly upon. The sex between the men was hot and explicit but it was clear they also cared deeply for each other. Emotional and with a pacing that I enjoyed, this was an interesting and good read which I enjoyed.

WOW, I love this book. This author has always been a favorite of mine but she has outdone herself with this book. An absolute must read!!!