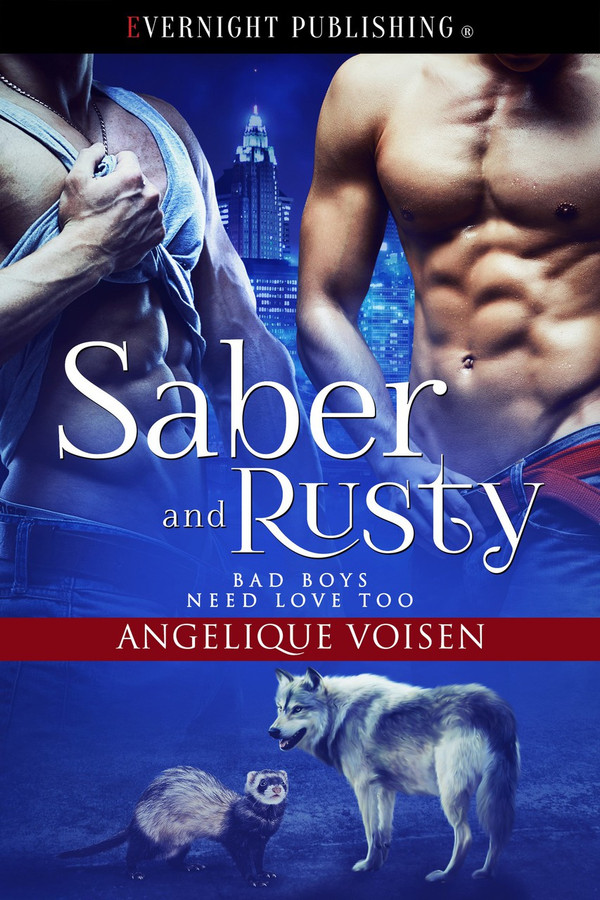 Ferret shifter extraordinaire Rusty has lost his lucky hat, and he’s angered one nasty crime boss in his quest to retrieve that most precious possession. Now, Rusty is undesirable number one on the hit list of the city’s most vicious mafia. Can anyone save this little ferret?

Saber has been labeled as a bully all his life. Given his scars and looks, everyone’s terrified of a vicious werewolf who’s good at beating people up. Still, Saber longs for a mate to love and care for. What he gets instead is Rusty. Rusty’s everything Saber could imagine, except his little ferret is keeping dangerous secrets from him. Will those secrets tear them apart, or will love triumph in the end?

Rusty needed to extract himself out of Saber’s warm solid arms. Pronto. He couldn’t say goodbye without a thank you kiss, though. One kiss wouldn’t hurt, right? Reaching for his human form, Rusty shifted. The werewolf grunted, loosening his arms. Saber must be deep in the realm of dreams because the werewolf continued his light snoring. Perfect.

Once he fully returned to human form, Rusty closed his mouth, preventing a moan from slipping out. Still, it came out muffled. Alarmed, he glanced at Saber.

What would it take to wake this particular wolf?

Oh well, plenty of time for him to explore and pet.

The touch of skin on skin was glorious. During his nighttime escapades, when loneliness hit him at an all time low, he’d avoided men like Saber, fearful of their strength. Dominant shifters were a beast in bed, but Rusty craved direction, to serve a man worthy of his submission.

Thinking along those lines could get him into trouble. Tales of predatory shifters taking advantage of the small guys were commonplace these days.

Risking his heart and his safety wasn’t on his list of priorities. Yet, not all of his tiny ferret heart had hardened as he initially suspected.

He trailed his fingers down Saber’s left pectoral, spreading his fingers to feel Saber’s heart, beating a strong and confident rhythm. Moving his hand lower, Rusty traced a swirl of ink leading to Saber’s ribs, the brickwork of his abs, and finally pausing on the werewolf’s cock. It hung between Saber’s legs—hard, long and curving upwards.

His mouth watered. Rusty wanted to feel that sensitive silken skin stretched over hard steel between his lips. To taste this powerful werewolf’s need. He began to curl his fingers over Saber’s prick, but large hands caught his wrist, the motion lightning quick. Yellow wolf eyes looked at him intently. His breaths came out his quick, his heart beat settled on a staccato rhythm.

“Where did you come from?” Saber’s voice was slightly thick with sleep.

Rusty could sense the other man’s wolf, wide awake and looking at his own precarious little animal.

Judging by the lust in the other man’s eyes, Rusty could tell the wolf was up for a little fun.

“I want to thank you for yesterday,” Rusty said huskily.

I enjoyed reading “Saber and Rusty” for the humorous romance elements. At times I had to laugh out loud. I like books where one character has a lot of growing to do and this book definitely had that. The chemistry between Saber and Rusty was very well written and it made for a hot read. Having Rusty overlook Saber’s so called faults was good for their relationship. It had its HEA ending. I enjoyed this story for how light hearted it was.

Great story, Rusty is adorable and who couldn&#039;t resist a grumpy werewolf with a soft spot for a certain ferret?