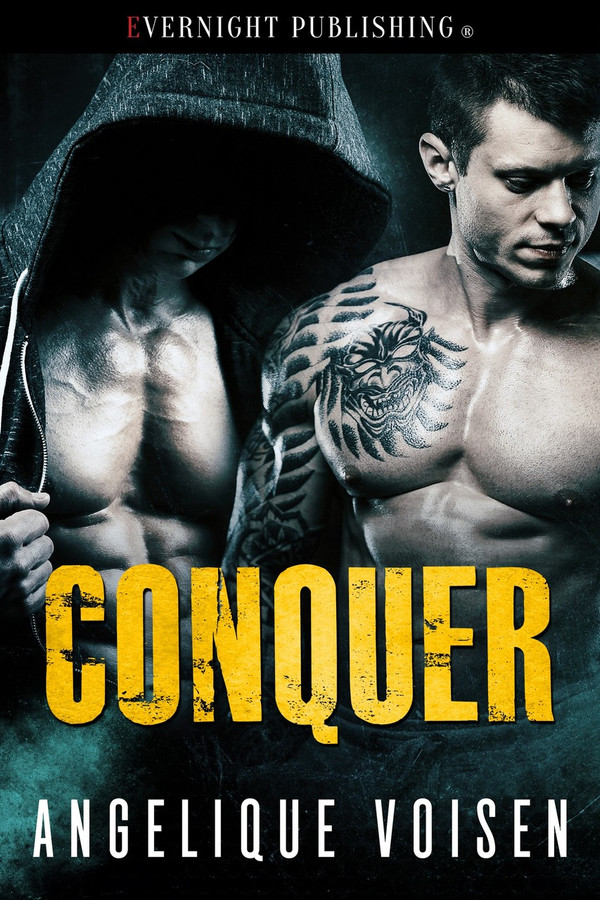 Most people fear the dark. Some embrace it. Blackened windows, a 400-square feet self-made prison, and a loyal Welsh corgi—that’s the extent of former soldier Matthew Ash’s world. Matt’s tasted hell’s battlefield. He wears the scars on his skin and soul to prove it. Matt’s agoraphobia keeps his demons out and that’s all that matters.

Burnt-out MMA fighter Will Grove is having the worst year of his life. His boyfriend just broke up with him and he lost the fight of the decade. Will moves into a new town, seeking a fresh start. Everyone tells him to watch for the crazy recluse, but Will makes his own rules. One glimpse is all Will needs to recognize a man whose mind is fucked-up as his own.

Matt’s certain Will’s going to run. Will’s out to prove this is one fight he’s not going to lose.

Will’s lips twist to a bitter smile. “I’m not the only fucking coward here.”

I expect Will to walk away. Slam the door with such force the wood rattles on its hinges, but he closes the last few steps between us.

Move, I scream at my two feet, except every muscle in my body is frozen in place.

An inch or two separates our bodies. Breaths hitching, I don’t push or slap Will away when he reaches out to cup the back of my neck, the muscles in his inked arm bunching and cording.

Our bodies touch, and my skin feels unbelievably feverish. Like my fantasies of us kissing, Will fists fingers into my hair, except the pain is real. He forces me to look up, dares me to call his bluff, to gaze upon the intense animal-like hunger blazing in his eyes.

Only then does Will crush my lips with his and grinds his body against mine. Awake, my needy cock presses against the tight fabric of my jeans, and I feel Will’s own erection pressing against my body, begging to be free and taken care of.

The heat and taste of Will floods down my throat and erases any logical thought behind. I’ve never been kissed like this. Loneliness does things to people, even soldiers. It pushes us to seek other lost souls in the encampment.

We dispense with kisses and go for quick fumbles in the dark, but here in my prison, Will has all the time in the world. I lean against him, hungry to receive him. Will deepens the kiss, other hand banding around my waist, grip like iron.

He tugs my hair and releases my mouth. “Call me a fucking coward again. I dare you.”

Brain too scrambled to reply, a moan slips between my lips. I feel like a fumbling idiot, trying to find his way in the dark. Taking a deep breath, I manage words. “It’s been a fucking while for me.”

Will lets out a deep rumbling laugh, the sound waking me from what seems like a deep slumber. “Let me tell you a secret, Matt.”

I have plenty of things to say, but the fiend catches my bottom lip with his teeth. Bites hard enough to draw blood, but that incredibly turns me on. Sex with Will, I imagine, is exactly like this. Savage and wild, just the way I want it, need it. He licks away the droplet of blood and plants rough kisses down my jaw, slight bristles of his stubble rubbing against mine. Will nips at my earlobe.

“Don’t you know, baby? You were mine the moment you opened your door. Deep down you know it. Why keep fighting this, us?”

Fear can take many different forms, and the two main characters in ‘Conquer’ each have to confront their own demons before they can be together and lead a halfway normal life. Matt faces agoraphobia of a crippling level after returning from Afghanistan, and Will needs to confront the fear of life in disgrace after losing a major fight. Both men tell the story in alternating segments, and it was fascinating to see what bothered each of them, how they tried to deal with their own situation, and how they were able to help each other. Their fears were shown in a very realistic fashion, and had me rooting for both of them to be successful – as painful as the road to get there turned out to be. Matt is a former soldier, and events while deployed have scarred him so badly that he is not able to leave his apartment. He lives in total isolation, except for grocery deliveries once a week, and the only thing that keeps him sane is a strict routine and no contact with anyone. Just the thought of going outside initiates flashbacks and panic attacks, and I felt for him. Therapy seems useless, but when his new neighbor starts to intrude in his life, Matt begins to want things he’d previously thought impossible. His fight to come back to something approaching normal was heart-wrenching. Will has his own set of problems. He is a burnt-out MMA fighter who not only lost “the fight of the century”, but was abandoned by his idiot, cheating boyfriend who is only interested in winners. He has no idea what to do with the rest of his life, but going back into the ring is not on his list. Until he is offered a rematch… and everything changes. He is intrigued by his next-door neighbor and decides to help Matt face the world whether he wants to or not – and instead ends up receiving as much support for his own issues as he ends up giving to Matt. If you like stories about two wounded men helping each other deal with life, if realistic situations of dealing with fear and the strength of character it takes to get over it are your thing, and if you’re looking for a read that is as moving as it is hot, then you will probably like this novella.

When Will moves to a new town to lick his wounds and quietly work his way back to fighting again he never imagined he would find a man he wants to fight for and be with more than he wants to be in the ring. All he knows is that the man in the next apartment never leaves his home, even to the point of having his groceries delivered. Will is intrigued by this but what he finds is not a crazy man but a wounded soul in need of help. Help that Will can and is more than willing to give but will Matthew accept that help? Matthew and Will’s story is an intriguing read. Matthew has come back from the military a broken man. He hides away in his apartment with only his dog for company. He longs to be free, but his pain and fears will not let him. When Will moves in next door to him his world is turned upside down. Will brings Matthew back into the world. Their attraction is strong and the more time they spend together the more Matthew wants. It was nice to see Matthew begin to break out of his shell and try to work towards overcoming his fears. Will is a good man and he fights hard for those that he loves, and he sees Matthew as worth fighting for. Will must make a hard choice and figure out just what he wants from life. I enjoyed seeing Will overcome his own problems as he fights for Matthew. Will has learned the hard way who he can trust and who truly cares about him. Now he must prove to Matthew that he can be trusted, and he will not only win in the ring but in the heart as well. Matthew and Will’s adventure is a roller coaster ride full of emotions. It was nice to see the two men find what they need in each other. The unusualness of their situation had me engaged in their story from the start and kept me engaged all the way to the end.