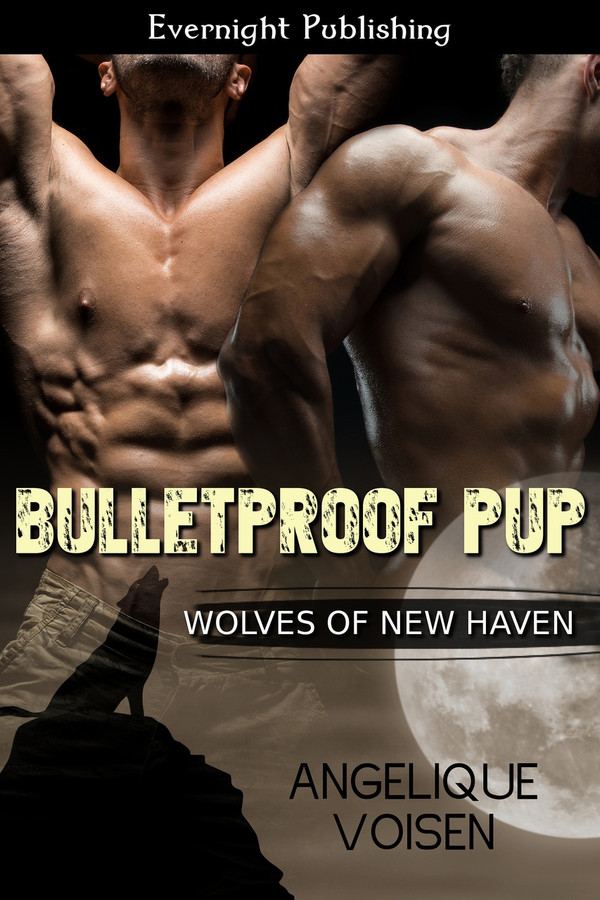 They don't call him Bulletproof Pup because he’s immune to gunfire. To fit into his wedding tux, Russell Summers has only been drinking bullet-proof coffee and eating lean. He was ready to start a new life...when tragedy strikes.

Russell retreats to the darkest corner of his mind. Russell only has one bossy, domineering, and gorgeous werewolf to keep him company. He can’t imagine a man like Dan would want anything to do with a mediocre pup who’s too different and too flawed.

Dominant wolf Dan Kennedy always knew Russell was his mate. Russell’s shy, sexy, and madly in love with another man. But Dan’s waited long enough. With nothing standing between them, Dan intends to claim what’s rightfully his.

Russell didn’t hesitate, helping him out of his bottoms. Dan guided Russell’s hand to his aching dick. “See how I’m always hard for you? I’m going to make you beg me for this. Get in the shower.”

“So bossy,” Russell mumbled, but Dan could see Russell loved taking commands. Kicking their clothes aside, Dan joined his pup in the tiny cubicle.

“It’s hard to fit two men in here.” Russell turned on the taps.

Dan doubted Russell would be complaining for long. Positioning himself behind Russell, he pressed Russell to him, nudging his shaft between Russell’s ass cheeks. Letting out a moan, Russell spread his thighs a little wider, but Dan kept his dick there, teasing Russell’s puckered hole but never pushing in, marking it with pre-cum. His territory.

“Because you like it.” Dan moved his hand to Russell’s prick. Gliding his hand up and down, Dan began with slow strokes. Thumbing away the pre-cum on Russell’s tip, he switched gears, moving to furious strokes.

“Tell me, pup. Does my hand feel good on your hungry cock?” Dan whispered.

When Russell didn’t answer instantly, Dan gave his prick a squeeze. “Answer me.”

Through the mirror across the shower, he saw Russell’s expression—head thrown slightly back, eyes dilated and mouth slightly parted—so ripe and fucking perfect for the taking.

“Do you want my dick in you? When was the last time you had a real cock in your tight little ass?”

“How many other men have you been with, pup? Tell me, I won’t get mad.” Dan slowed his hand movements on Russell’s prick, smiling at Russell’s frustrated snarl.

Fuck. Dan wasn’t sure how long he could hold his orgasm back. No wonder Keith did a number on him. “You made a mistake, pup. I haven’t fucked you yet, but once I do—”

“I’m going to make you scream. Make this so unforgettable you won’t want for another man inside you again but me. Once you’re mine, you belong to me forever, pup.”

It seems a long time since I was immersed in the fun, wacky world of &#039;Wolves of New Haven&#039;. The author has created a world of shifters, but not the typical lore where the werewolves heal super fast and never get human illnesses. Oh no. This world has wolves with heart disease, diabetes, high blood pressure, obesity, and many more human frailties. I think it&#039;s part of the reason why I like this world. These characters aren&#039;t perfect. Nobody deserves to be left at the altar, and certainly not without any explanation. I felt so bad for Russell. His self-esteem and self-confidence were in the toilet before his best friend, and mate-to-be, Keith, left him standing alone in the chapel. Russell has always felt like the odd man out, the shadow, shy and introspective, whereas Keith was the brightness and the one who made friends easily. Russell had Keith, ever since they were kids, and that was it. Russell has no idea why Dan keeps coming around. Russell just wants to be left alone to wallow in his self-pity. But Dan isn&#039;t going to let that happen. He&#039;s going to keep pushing until Russell understands that they&#039;re fated mates and Dan isn&#039;t going anywhere. Dan is certainly hot and very good for Russell. Another delightful addition to the series. A very fun, sweet, and sexy read.

I love this series. The author does a superb job in making 3 dimensional characters with engrossing storylines. The characters adventures and actions are heartfelt. The author uses a whole new lore for shifters. They are not gods in flesh. They have human weaknesses and are well thought out. Every book in this series is great. I have them all and enjoy rereading them.