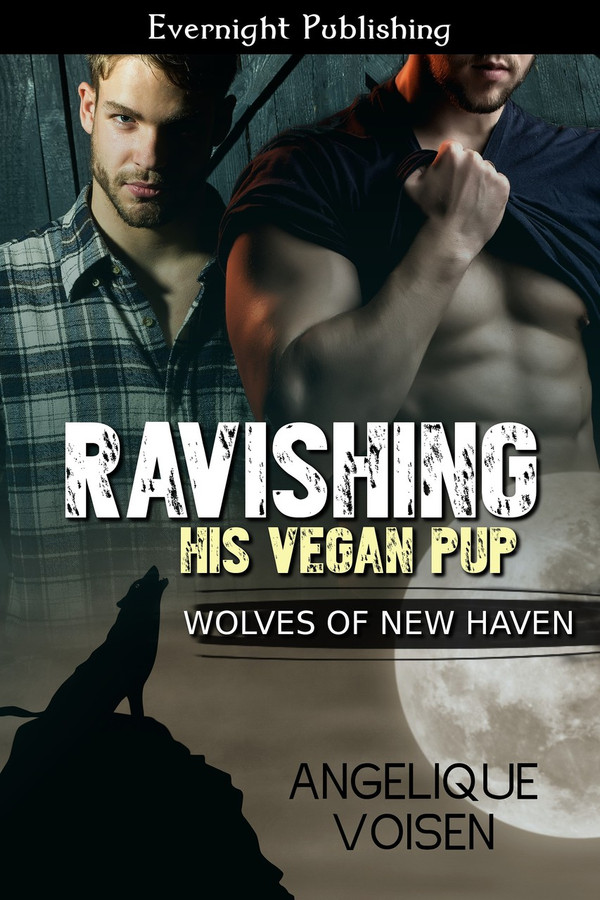 Submissive Omega Ken doesn’t trust domineering alpha males, meat-eaters, and insensitive pricks. Van Walker is all three. Someone broke Ken’s heart once, leaving him to pick up the pieces. Slow and easy is what Ken wants in a relationship, but Van’s hell on wheels. Van doesn’t understand the word 'no'. Ken will buck before he says 'yes'. Can they come to a compromise?

Ken closed his eyes, imagining the smell of sizzling steak. Oh, screw the fucking carrots and broccoli. He deserved a damn treat. Ken couldn’t remember his last cheat day. “On second thought, pile on the mashed potatoes and fries, and one beer please.”

He wouldn’t go as so far as to eat meat. No, Ken would keep some of his dignity and control, thank you. Lionel gave him a look as he downed the bottle instantly, then shook his head when another customer called him over to order. Closing his eyes, Ken let the amber ambrosia slide down his throat. Liquid courage tasted like heaven, although it took awhile for werewolves to get drunk. Either way, Ken hollered for another, and guzzled his third when Lionel placed his dinner in front of him.

“Take it easy,” Lionel muttered, giving him a look of sympathy before moving away.

Shoving a forkful of mash potatoes into his mouth, Ken glowered at the stranger, before doing a double-take. He nearly spat the chunk of potato out, but chewed slowly instead. Normally docile, Ken’s wolf leapt to the surface of his skin, making him feel slightly feverish. The sounds of the crowd and the county music faded as the world narrowed its scope to Ken and the gorgeous stranger next to him.

Sexy as sin, domineering and crude, Van Walker sat next to him, seemingly amused by his discomfort. Ken looked left and right, wondering if Van made a mistake, but he kept iron-grey eyes trained on his. Men like Van didn’t hit on sad nobodies like him for a reason. Ken didn’t know Van well, aside from the fact his two brothers were mated to Sal and Toby. The Walker brothers belonged to a group of transfers when their old pack disbanded. Bloody rumors circulated around them. Everyone knew they did the dirty work of their old pack, and didn’t care much for safe and sane.

Still, looking was free. Ken’s gaze lingered on his face first, roughly handsome except for his nose, which looked like it had been broken a few times and the faint scars marring his face. Dark stubble covered his cheeks and jaw, drawing Ken’s attention to the cruel curve of his lips.

Lower, his gaze went, moving to Van’s broad shoulders, the solid planes of his chest, hidden underneath his leather jacket and plain white tee. Something poked through the left pectoral of his shirt—a nipple ring. He moved on quickly, swallowing at the huge bulge pressing against the denim of Van’s faded jeans. Unable to help himself, Ken wondered who Van sported the boner for, certainly not him.

Much to Ken’s chagrin, he did, glowering at Van who chuckled.

“Answer my question,” Van said, nodding to his plate.

“I’m not celebrating shit. I eat when I’m fucking depressed. Happy?” Ken couldn’t keep the bitterness out of his voice. He shoved another forkful of potatoes into his mouth, hoping Van would be disgusted by his eating habits and leave. No such luck.

Lionel pushed a plate in front of Van. Rib-eye with potatoes and slaw, and the smell of meat made Ken’s stomach grumbled.

The stupid, inconsiderate meat-eater cut large portions of his steak. Van ate with relish, licking at the juices down his finger, and wharfing his food down like he hadn’t eaten in a week. The pig. Ken matched him, trying to outdo him.

“I like a pup with a healthy appetite,” Van said idly.

Cheeks heating at Van’s assessment, Ken swallowed, not tasting the food. It was Van’s sinful lips he imagined, claiming his, and Van’s callused fingers trailing down the length of his body, curling around his dick and holding it captive.

“Don’t you have something else better do?” This had to be some cruel game. Van’s buddies might be out there somewhere, videotaping all this. Snipe the fatty, tease the chubby pup—he heard it all. Usually, Ken let it go. Better to not give his bullies and tormentors more ammunition to work with, but tonight, Ken was mad. He hurt, and needed to lash at someone else.

“Work your magic on some poor sad sucker who would fall for your tricks?”

A growl tickled out of Van, the sound more animal than human, making Ken jump on his stool. Catching sight of Van’s pupils turning wolf-yellow, Ken’s heart began to hammer in fear. Everyone knew provoking dominant wolves equated to suicide and Ken fell on the lowest rung of the pack ladder.

“Everything all right here?” Lionel asked, shooting Van a look.

“Yeah, this pup’s just being rude when all I fucking want is to be friendly,” Van explained, flashing his slightly sharpened canines.

Ken pushed his finished plate aside. “I’m in no mood for games, bastard. I already broke up with one asshole, and I don’t want another chasing after me who’s out to get a good laugh on my account.”

Van snorted, and then looked at Lionel as if they shared a private conversation. “See? Defiance tastes fucking delicious on a pup.”

I loved this short story and I want more… These characters were likeable and we’ll developed even with the length of the story… Which was Van is my new obsession and I so want my own version of him… Ken is so sweet and I was glad to see his personality blossom as the story progressed… Really great story from author Angelique Voisen who seems to be on a role with her great books.

Ravishing His Vegan Pup is the ninth book in the Wolves of New Haven series by author Angelique Voisen. I did not read all of this series in order, I was not lost at all. So I think you could pick up this one and be fine if you never read this author before. This story is the kind of story I love. Light hearted, fun, and erotic. Ken is a wolf with a lot of insecurities. His past boyfriend had drilled into him how worthless he was, and he bought into it. So he thinks he is a chubby, worthless wolf no one would want. Truth is, he is kind, sweet, and has a great sense of humor. He is also vegan and an omega. He is a geek, loves computer and video games Van is an alpha wolf. Domineering, crude, and sexy as sin. His brothers are mated to Ken&#039;s best friends. He was the defender of his brothers in their old pack. They did the dirty work for their old pack. So he has a rough rep to live down. But he is kind, tough, and fair minded. I liked him very much I wish I could have seen more of his personality. This story is told from Ken&#039;s point of view so we really do not explore Van as much. Over all this is a great sweet story that is both hot and a lot of fun to read. I cannot wait to read more from this series in the future and find out which wolves fall in love next. Five Shooting Stars

&#039;Ravishing His Vegan Pup&#039; is the ninth installment in Angelique Voisen&#039;s fun, sweet, and quick read series, &#039;Wolves of New Haven&#039;. I adore this world where the wolves aren&#039;t always physically perfect, and becoming a werewolf doesn&#039;t automatically boost your metabolism. Such a relief to see a paranormal shifter world with people who look like me. *snort* Ken is the last of the best friends triad (with Sal and Toby), and his boyfriend dumped him a month ago claiming he didn&#039;t want a chubby loser boyfriend. Poor Ken even allowed his ex to make changes in his life, because it&#039;s better to have an ***hole boyfriend than none at all, right? Wrong, as Van Walker is about to show him. Van has been eyeballing Ken ever since his brother Kal and his mate, Sal, found each other. Now it&#039;s Van&#039;s turn to show Ken how amazing Van thinks he is, and to rid Ken of the insecurities his idiot ex left him with. Another great installment in the series. I really enjoyed the ending, particularly seeing Ken accept that Van truly loves him and wants him for his mate. Of course, watching Ken&#039;s idiot ex get his head handed to him by both Van and Ken, was entertaining. I&#039;ll be keeping my eyes peeled for new books in this series. NOTE: This book was provided by Evernight Publishing for the purpose of a review on Rainbow Book Reviews