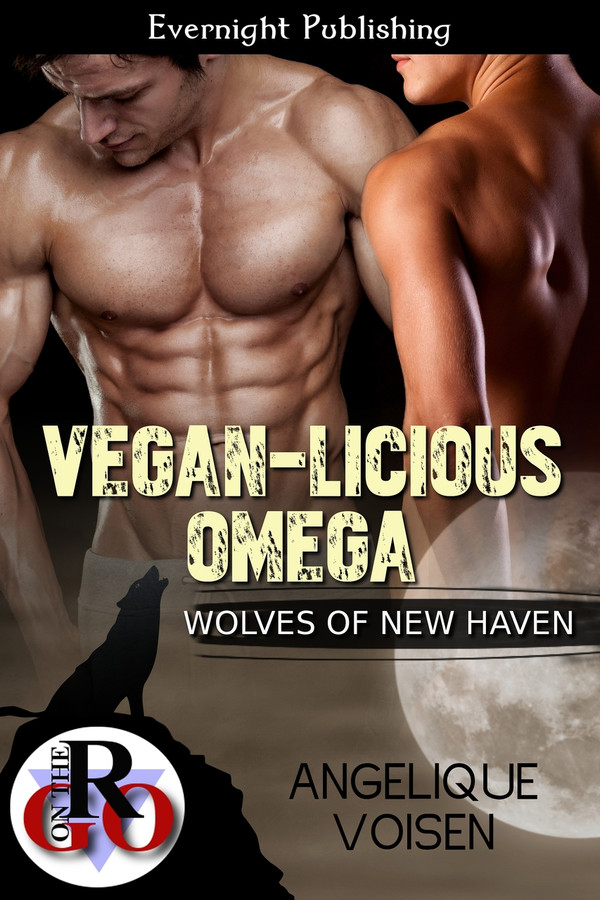 Being a vegan werewolf and an Omega submissive to the most powerful pack in the country isn’t easy, but Ricky Starr refuses to change who he is. When he’s given an impossible task, Ricky does it anyway.

The last thing he expects to find in New Haven is the frighteningly dominant Donnie Mills. Don isn’t what Ricky expects in a mate, but it’s hard to find a man capable of keeping his heart captive while being able to whip up a great vegetarian curry at the same time.

When Don catches a strange wolf sniffing around his town, it’s his job to investigate. To his relief, Ricky isn’t a threat, only an abused wolf who likes to tumble in his sheets. When the vegan werewolf unintentionally begins to rub his unique scent all over him, Don realizes that he’s sick of dalliances. He wants to play for keeps.

“Please. I’ll do anything you want. I’m sorry,” Ricky pleaded, dropping the box of Tofurky to raise his arms in defense. The words flowed out of him so naturally and easily that he immediately felt his wolf’s loathing at his cowardice.

A quick snap of canines made him whimper. More unpleasant memories battered at him. While the scars always healed, the dominant wolves in his pack liked to mark him during sex. Being under a fully shifted wolf like this, he almost went into a panic attack. His heart threatened to burst and his lungs labored to keep his breaths even. Ricky couldn’t be calm though, until he realized the wolf on top of him wasn’t doing anything but studying him.

There was no promise of violence or of pain. Don kept his claws sheathed and while his jaws were within biting distance, they didn’t move in for a kill. Now that Ricky wasn’t panicking, he could appreciate the handsome beast above him. In wolf form, Don’s fur was a startling and beautiful pure snow-white. He kept those intense and drowning blue eyes too, and Ricky remembered a man still lurked behind the skin of the animal, a man who was open to reason.

Was his intention only to stop Ricky and have a talk?

“Okay you got me. I’m not going anywhere, I promise,” Ricky said, hoping those were the words the wolf wanted to hear.

He groaned when Don began to sniff at his face and neck, as if he was trying to familiarize himself with Ricky’s scent. “Can you get off me now?

Don didn’t get off him, but the fur began to flow out of his body like the gentle motion of waves. Ricky had never seen such a smooth transformation and he was glad he didn’t decide to fight with claws and teeth. He’d lose and lose badly.

The other wolf’s masculine scent began to roll off him. A delicious mix of sweat, leather and soap. A different sort of whimper emerged from his lips when smooth hard human flesh was now above him. It wasn’t just Don’s flesh that was hard either.

Ricky gulped, feeling the other man’s growing erection. What would it be like, to feel that glorious length pressed against his bare belly, and what more if it teased its way between his ass cheeks? It was even better if Ricky had his meaty shaft in his mouth. Some male submissive wolves didn’t like sucking cock, but Ricky rather enjoyed the power of having another man’s most fragile and intimate piece in his mouth. Ricky also suspected he’d immensely enjoy running his lips and teeth over Don’s cock so he could watch him squirm.

“You don’t have to be afraid, little wolf. Like I said, I just want to talk,” Don said, still above him.

Both his corded arms balanced on either side of Ricky’s shoulders. Those delicious biceps were something to be admired and Ricky was tempted to peek at the hint of ink curling around his shoulders.

“It looks like you want to do more than talk,” Ricky muttered.

The right thing to do to save his skin was shut up, but like always, his defiance always got the better of him. Suddenly those intense blue eyes turned to laughing blue eyes. A smile appeared on his lips.

“You mean this?” Keeping one hand pressed against the concrete to balance himself, the other trailed with deliberate slowness down his delicious chest and belly, and curled around his happy cock. Ricky wriggled uncomfortably beneath him.

“Or this?” Don then pressed his large hand on the bulge in Ricky’s jeans.

The pressure of his hand over his crotch was enough to make him moan with need.

Double shit. If this goes on, I might just allow a strange wolf to fuck me out in the open.

“It seems to me you want the same thing as I do, little Omega.” Don grinned, showing his perfect white teeth.

With all the nerve and little courage he could muster, he pushed the dominant wolf off him. Don fell back on his ass, and before his stance turned aggressive and Ricky could find the white wolf tearing at his throat, he leaned forward and thrust his head between the other man’s legs.

“What the hell do you think you’re doing?”

Once Ricky’s hungry mouth closed over Don’s cock though, the dominant wolf ceased to speak.

As a gay, vegetarian, wolf-changeling(ok, in my dreams I am lol), I thought this story was really intriguing and was surprised by its interesting scenario. It helped me personally with some things and also turned me on in the process. Thanks Angelique!!

Wolves of New Haven Bk 2. This bk the second of the series is a light quick easy and enjoyable read.This Book is about Don and Ricky. At the end of the book (which really I didn&#039;t want it to finish)I just wanted the next book, which I was very lucky as I had kept my eye on the books and waited to 5 books of the series was out before starting.2 books down 3 to go loving this series.

&#039;Vegan-licious Omega&#039; is book two in Angelique Voisen&#039;s series &#039;Wolves of New Haven&#039;. Here, the author has created a very different shifter world, where werewolves can be diabetic, overweight, vegetarians, and much more. As a true lover of all things shifter, I had fun reading this book, and enjoying the world. Ricky Starr is in New Haven at the behest of his alpha of the Starr Mountain pack, to convince Derrick, their missing beta, to return home. The alpha sent Ricky because, as the lowest wolf on the totem pole, Ricky is the most easily expendable. Nice, huh? As omega, Ricky is accustomed to being his pack&#039;s whipping boy, and a whore for any dominant wolf. Again I say nice, huh? It doesn&#039;t take Ricky long to find Derrick, but he also meets Don, the other beta for the New Haven pack. Don makes Ricky feel safe and cared for, even though Don is a dominant wolf. Ricky has no idea how to handle these feelings, though, as he&#039;s lived nothing but a life filled with abuse. Another sweet but too short, addition to the series. Ricky is very lovable, and it was nice to see him find his happy ever after with a man who truly cares for him.

Ricky, an abused Omega wolf who also a vegetarian, is sent to talk Derrick, the son of his Alpha, into coming back to the pack. He gets caught by sexy Donnie Mills. What he doesn’t expect is for his life to be turned upside down and to be claimed by the Beta wolf of the New Haven wolf pack. Loved how Don eliminated the threat to Ricky by his evil mate Clive. Hot sex between Ricky and Don. Good read.