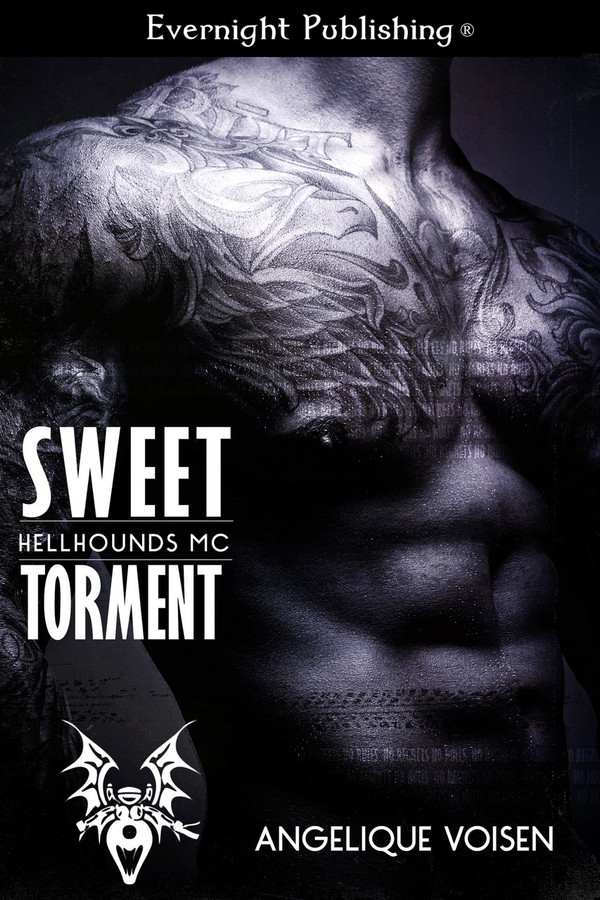 The apocalypse came and went, but hell is just about to break loose in Wolf County.

Everyone knows the rules. Those who mess with the biker Sweet, always end up in the dirt. Ruthless, unchained and free, Sweet screws the way he rides…until he meets Phoenix.

A vicious player arrives in town and the Hellhounds need to keep the bloodshed to a minimum. The Collector takes young men captive, breaks them to see them burn, and Phoenix is his brightest star yet. Rules exist so Sweet could break them, but taking Phoenix for his own might mean his end and the end of the club.

Sweet snarled, but his control only slipped for a second and that smile was back. “I’ve never pretended to be a good man, but I’m a much better choice than the Collector. Come with me. There’s nothing but wasteland between Wolf County and the next shantytown. How far can you run? Am I such a horrible choice?”

Sweet thumbed the hammering pulse on Phoenix’s neck, traced his way down his collarbones, and lingered left of Phoenix’s sternum where his heart beat in an unsteady rhythm. Was the biker trying to make a point? Hard to argue and come out with lies if Phoenix’s body betrayed his desires. Equally difficult for Phoenix not to imagine how those callused fingers would feel, curled around his cock.

He swallowed, not liking the allure of the forbidden. Each second he lingered here hampered his chances of escape, but experience taught him the Collector would find him no matter what.

“Kiss me.” Horrified, Phoenix didn’t realize he’d uttered those two loaded words out loud. What the fuck was wrong with him? The neediness in there pissed the hell out of him. That was good, anger gave him clarity—or should have. Sweet took that as an invitation and did just that.

Phoenix should have figured a man like Sweet didn’t kiss. He gripped Phoenix’s jaw, tipping his head backward and took the plunge. Phoenix’s eyes widened. Sweet claimed his mouth like a starving man eager to have his fill. Christ. Phoenix couldn’t recall the last time anyone kissed him—the toe curling and complete mind-numbing kind.

Customers usually only used his mouth as another hole to ease their relief. Phoenix forgot how good it was, how intimate it felt.

Searing heat and the intoxicating taste of Sweet flooded down his throat. Phoenix’s insides melted. He yielded against Sweet’s hungry mouth, wanting more. He clutched Sweet’s broad shoulders, sinking his nails into skin and ink, and drew pinpricks of blood.

Phoenix responded, catching Sweet’s bottom lip with his teeth. He sucked and nipped, closing his eyes as Sweet began exploring every inch of him. Sweet didn’t seem to care, or look disgusted by the abrasions and scars he found, only stroked them with a thoughtful gentleness that surprised Phoenix. He squirmed when Sweet reached lower, seeking his thickening prick.

No. Phoenix couldn’t have that, not yet and not here at least. Once Sweet closed his digits and held his cock captive, it would become the prelude to something. Some kind of messed-up relationship Phoenix refused to put a label on.

Phoenix bit down and Sweet let out a pleased rumble before pulling back from his mouth. Panting, Phoenix looked at Sweet, bewildered. He wanted more, to take this further and the bastard knew it too. Phoenix glared at Sweet.

Phoenix opened his mouth, ready to sass back, but Sweet took that opportunity to thrust his tongue into Phoenix’s mouth. This man, Phoenix thought, was beyond dangerous.

&quot;The world burned. Not consumed by a literal fire, but the T-11 virus devoured and left everything it touched in cinders and ashes either way. Smoke curled. Haze festered. Spread like wildfire from one state to the next. North America and South America followed, and then entire continents. Order and civilization took a hard fall, and Sweet laughed while it happened. Born in a time the supernatural were hunted down like animals, how could he not?&quot; I was excited to get more clarification on what caused the Fall. It seems a virus created by the government was released, and the T-11 virus was targeted at certain gene sequences in an effort to destroy all paranormals. Unfortunately it killed a lot of humans, too, and made many more into monsters or drove them insane. The Hellhounds MC, especially the more powerful in the club, i.e. Mace, Spider, Viper, and Revo, believe The Collector, aka Dr. Lars Seymour, may be more dangerous than they first believed. He may be performing experiments, much like what was done pre-Fall. I hesitated a little at reading Sweet&#039;s story. Let&#039;s face it, he&#039;s not my favorite wolf - hell, he&#039;s nobody’s favorite anything. His own brother, Reaper, barely tolerates him, and it&#039;s because Sweet is always itching for a fight, causing trouble, stirring up a hornets’ nest. He can&#039;t ever leave well enough alone, and most of that has to do with having lost his mate so many years ago. But he might have met his match when Dr. Seymour brings Phoenix to town. Phoenix used to be a starving college student until the T-11 virus turned him into something that burns and kills with fire. He&#039;s been a prisoner of Dr. Seymour&#039;s for five long years, being abused, degraded, and humiliated at every step. When Sweet scents him, he knows Phoenix is his, but stealing the prized possession of a powerful man doesn&#039;t come without risks. Not to mention, Mace is going to kill him. Phoenix is the first of all the characters I&#039;ve encountered in this series who really made me feel for him. No matter how much he&#039;s dealt with, how much anger he still has, there&#039;s a tiny part of the kid he used to be lurking inside. A kid who still has hope. Luckily for Phoenix, he tries to do something monumentally stupid in hopes of saving Sweet, Wolf County, and the club, but Sweet saves his butt. And, yes, I learned to like Sweet during this book. Definitely my favorite of the series so far! I was impressed that the author managed to make Sweet someone to like, and I adored Phoenix. Another exciting adventure in a world I&#039;m becoming fascinated with.