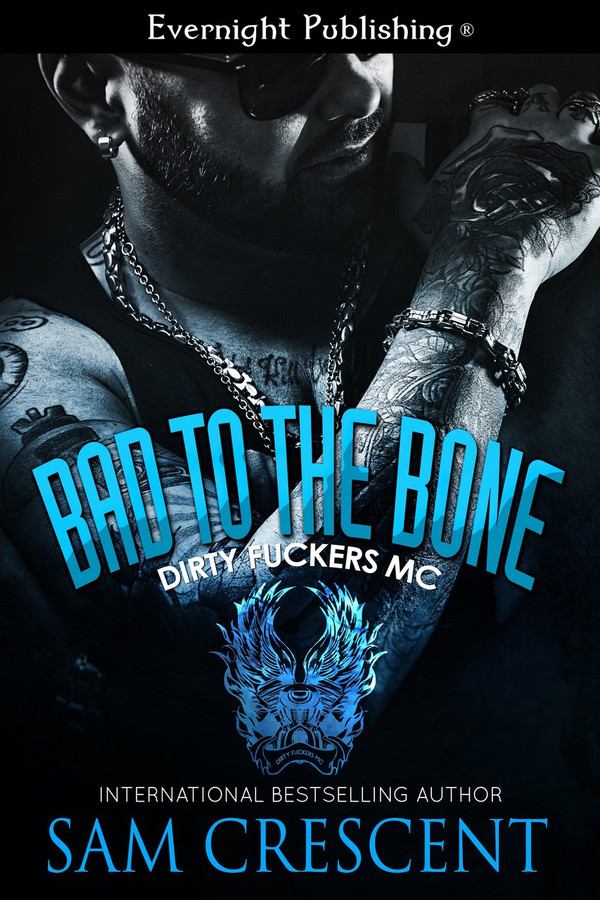 Come and party with the Dirty Fuckers MC...

We guarantee great sex, variety, and, above all, fun. Interested? Come in and party.

Cora has no choice but to join her friend when she’s determined to go to the local MC club to get laid. Cora’s not the settling down type, and hates dating. Enter a scarred biker, and Cora’s changing her beliefs.

James is the founder and president of the club. With his scarred face, he’s used to being passed over for his brother. But when Cora enters the club, James has to have her.

The adventures of the MC—and James—are about to be brought to light. Can Cora handle the heat? Will James convince his woman that being his old lady is the best decision she’ll ever make?

Pulling her ear buds out, she smiled at him.

“Are you stalking me now?” she asked, walking toward him. He stepped away from his bike, and she couldn’t help but look down the front of his pants.

She’d had a lot of men in her time, and seeing him like that, she knew she’d not even come close to being with a man that big. He was huge, rock hard, and thick. He was confined in his pants, and she wondered how good he looked outside of his jeans. She licked her dry lips, unable to look away.

Stop staring at his dick. Look him in the eye, pervert.

Forcing herself to look at him, she wanted to wipe that cocky look right off his face.

“Sorry, I’m not looking for a boyfriend.” She placed her hand on her hip, smiling at him. Cora wasn’t unaware of how much fun she was actually having. He was the first man she’d taken the time to even play with. James hadn’t taken off running. He kept coming back for more, and it intrigued her.

“I’m not looking for a girlfriend. I’m looking for a woman who wants a good fuck, and has no limitations in the bedroom. Know of anyone I could use for that?” he asked.

Damn, this man was after her own heart.

“If a guy with a dick that size can put it to good use.” She tilted her head to the side, wondering what his comeback would be.

“Let me in, and I’ll show you exactly how fucking good it can be between us.”

Cora breezed past him. She liked his answers a hell of a lot.

Opening the door, she waited for him to step past the threshold into her home. Cora moaned as he closed the door with her pressed right up against it. James moved fast, which she liked a lot.

He tore the music player out of her hands, placing it on the counter beside her door. This was where she put her keys and mail when she got in the house. James pressed her hands above her head, trapping her between the door, and his body. Core didn’t put up a fight.

“This doesn’t exactly tell me what you can do,” she said.

James ran his hand down her body, touching every inch of her, and yet his touch wasn’t enough. Over her clothing, his touch burned, and she so wanted them both to be naked with each other, touching, getting accustomed to their touch.

This is another good read from Sam Crescent! I absolutely loved the main couple in this story, and their relationship was wonderful. James and Cora were perfect for each other. Sam Crescent took it outside the box with this one, turned it around a bit, and made James just a little bit vulnerable because of his scars. He was used to women looking over him in favor of his more handsome brother. James was a good guy but he was also a bad ass alpha biker all the way. He was intrigued by Cora and decided what he wanted and he wanted more from her than sex. &quot;I want her. I&#039;m going to have her.&quot; Cora wasn&#039;t the usual heroine either. She was a lusty, plus sized firecracker, and I loved her attitude. I loved how she pushed everyone and called them out on their games. It was refreshing and pulled me deeper into the story because I liked her so much. No shrinking violet either: this girl like to get wild and usually made the first move in their relationship. Yes, this is a very naughty book :) It had lots of kinky love scenes to enjoy. Bad to the Bone begins another exciting biker series from this talented author. The series is original, set in the same world as The Skulls, Chaos Bleeds and Trojans MC, but with a different club dynamic. The world building was strong as this first story opens with the DFMC putting down roots in the town of Great Falls and the President claiming an old lady. The author introduced a fantastic cast of characters, left a lot of questions unanswered, stories untold, and hot bikers to be claimed. All I can say is that I enjoyed this great story and look forward to an awesome journey.

Loved it, Sam crescent is genius as always. Can&#039;t wait for the next one in the series.❤️

This is NOT like other MC books. I loved it for just that reason. The heroine Cora is likeable and also real. Women are portrayed differently in MC books. Cora is not dependent nor is she shy about sex. She is strong and quick to help out people when things go bed. Everyone is, to some degree, shaped by their past. She&#039;s been burned and lives her life for herself. She likes what she likes and takes what she wants, without apology. I think James is a great match for her. She shows him he is more than he thinks he is. He shows her, not all men are alike.

Hot, Hot hot must read it got it all hot bikers hot women and hot as hell sexy oh a through in a he a perfect

What can I say but Sam Crescent has brought us back into the world of MC&#039;s and this time we meet an all new MC. The DFMC are one group of bad ass bikers that have legit business&#039;s and take care of their town. We meet the President of the club James who has big plans for his club and with the help of his brother and brothers they make it a successful MC. Cora a School Secretary and all around great person isn&#039;t looking for a man but as a night out turns out to be a great beginning for Cora when she goes to the MC with a friend and all her fantasies are awaken. James &amp; Cora hit it off that the chemistry is coming right off the pages and all you can really say it is one HOT relationship that wants you to turn the pages to see what happens next between them. If you are into some hot MC men even some dirty talk and romance this is one new MC you want to meet

OMG!!!! This book leaves me speechless. I finally found a book where the woman is not some shy, pathetic college girl who&#039;s never had sex nor knows what she wants. Cora is my shero. She is bold, sassy, sexy and knows what she wants. A woman after my own heart. James is a bad-ass sexy biker who found a woman who is his exact equal. I&#039;m not one to give descriptions on a book but this book ROCKS!! I&#039;m not usually into ménage books, but this one was done is good taste. If I could, I&#039;d give this book 10 stars. Excellent!

Who doesn&#039;t love to read about a dirty, sexy biker and a beautiful curvy women who know what she wants. Put those two together and watch the fireworks...

I loved this book. James and Cora were great. It was actually a love story. The romance was great. Cora was great she knew what she wanted and didn&#039;t apologize about it. James was a sweetheart. Great book would recommend it. Thanks Ms. Crescent for a great book.

This book was great a different story about the MC take! You get sucked in with the caricature&#039;s right off the bat

I received this ARC for a honest review. This is a sexy hot biker book .Cora is happy with life but who doesn&#039;t want hot,tattooed biker like James to make it better.I enjoyed all the characters dialogue.Loved it.Plenty of hot steamy sexiness. I want more from the DFMC they will have some great stories to tell.

Oh my I loved Bad to the Bone. This story is about Cora and James. Cora works at the local high school and James is the president of the local MC. When Cora is talked into going to the MC to party with her best friend she meets James who also notices her but when she is not what he is expecting he know he has to have her no matter what. This is there story and it was great and super hot you might need a fan and a great storyline that really pulls you in and makes you fall in love with 2 characters that a perfect for each other. I can&#039;t wait for more in the DFMC Series.