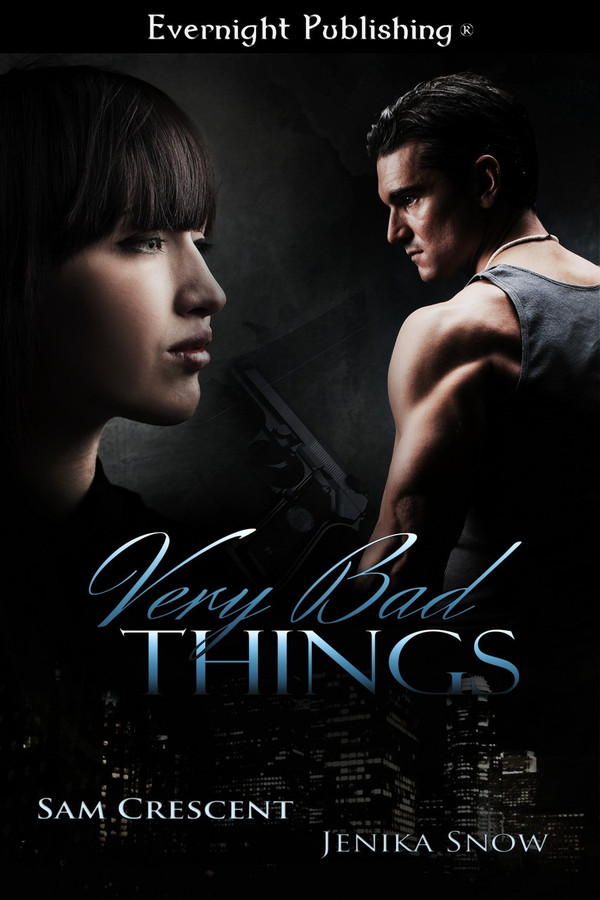 Ryker Black accepts who and what he is. Working as a hired hit man, he kills for a price without remorse. When he's called to do a job, a young woman becomes a witness to the killing. He should have taken her out, too, but he can’t. He wants her...so he keeps her.

Fiona Sterling has lived a sad life since her entire family died in a plane crash. The one person that she considered a friend is now dead. Everything changes when she's taken away by a man that makes no mystery to the fact he wants her.

With death and danger following them, Fiona and Ryker find solace and pleasure in each other’s arms. But can two damaged people become whole again?

Ryker stared at her sweet, wet pussy, and although sliding his dick into her should have been the last thing on his mind, he couldn’t deny that her presence made him feel these fucked up emotions. He didn’t want women the way he wanted Fiona, never had, and he didn’t like that fact. She had run from him, had not listened to him, and now she was going to see the consequences for her actions.

“Back up.” He wanted her closer, so much closer that if he wanted to he could lick her soaked cunt, eat her out until she was crying and moaning, begging him to stop and pleading with him to continue. She wanted to hate him, to leave, but the truth was there was a sick part of her as well, a part that was just as dark and twisted as he was. She had no one in this world, just like him, and maybe this was some screwed up way for fate to bring them together?

Shit, listen to him acting like some pussy-whipped asshole. No, she was going to experience the pain that he could deliver, and although he wanted her coming for him, releasing what little strength she thought she had, he was also not going to be gentle with her.

He brought his hand down on her ass, stroked her soft flesh, loved that she was curvy and big, and that he could grip onto the huge mounds of her bottom and still have extra. He let go of her, reared his hand back, and brought it down on her right ass cheek. She cried out, and he grew harder from the sound. He was a sick bastard, wanted her crying as he spanked her, hurt her and brought her pleasure all at the same time.

Ryker did this over and over again, growing more aroused and angrier with every cry she let out. Her ass shook, turned red, and he knew that he’d come in his jeans before the night was over with. He wouldn’t rape her, because although he was a killer, raping women was not what he did. He also didn’t willingly beat them. This was different though. This was something that would let her know he wouldn’t be tested. He might be spanking her, causing her that kind of pain, but she was wet, and he had seen how engorged her little clit had been. She was definitely afraid of him, had every right to be scared of this situation, but she was soaked and liked what he was doing to her.

“I meant it when I said there are worse men out there than me, Fiona.” He spanked her ass again, but this time moved lower, so the tips of his fingers landed right on her pussy lips. She screamed out especially loud that time, but she grew even more soaked.

Loved this short book. It was a hot, dark romance. I will read it again. Do recommend this fast paced romance.

Sam Crescent and Jenika Snow have done it again. Separate they are amazing authors but together BOOM. Looking for a hit man that falls in love, a girl who needs someone to love her. Then don&#039;t miss this quick read by two great authors.

Very good bad things turned out to be very good things. I am so glad that this two authors paired up to write this story. The characters were well developed. I really enjoyed the book. I highly recommend it. Can&#039;t wait to see if they write another story together. LSanchez

It doesn’t start off that way, but this is quite an awesome dark romance. Ryker is a hit man and happens upon Fiona at the wrong place at the wrong time. Normally she would just end up being out of the picture, but he sees something in her and promptly takes her with him. Fiona is barely existing, really having nothing to live for since all her family is now gone due to an accident. Ryker brings out something in her that she can’t explain, she wants to hate him but her body wants him at the same time. When these two scarred beings come together it just over-powering the lust and the emotions each brings out in each other. Awesome quick story by two fantastic authors, make sure you don’t miss it! *ARC provided in return for an honest review

I love this book, it has the right amount of good and very very bad. Great job ladies can&#039;t wait for what you do next.

I was given an ARC for an honest review so here goes; I really loved this book. It was brutal, gritty and hot! To be honest, I was kind of worried because Tyler is a hit man and I didn&#039;t know if I could get into a book like this. I started reading and just got sucked into the story. If you&#039;re looking for a typical romance, this isn&#039;t it but, if you love down and dirty sex along with a confused &quot;bad guy&quot; hero, you will love this.

Ryker was a man living in a dark place where bringing death was his only solace until he meets Fiona who was at the wrong place and the wrong time. Fiona is a woman haunted by a tragic accident that happened in her life. When she&#039;s with Ryker she conflicted on whether she hates him or wants him. Too bad because Ryker is alpha delicious enough to know what he wants and what he wants is Fiona. This was a fast paced and well written story that paints us a picture so clear, so vivid, so unbelievably erotic, you can&#039;t help but be transported right to it. Together Sam and Jenika brings us a love story unbelievably captivating, that all you want to do is stay attached to this world and these characters for as long as possible.

Where do you begin with book but to say it was Fantastic. Sam Cresecent and Jenika Snow take you to a dark and somewhat evil place where two people who are living in their own messed up worlds. Fiona a young woman dealt with a horrible tragic life leaves her lonely and feeling her life is going no where. Ryker is a evil man doing what only he knows how to do to survive. When Ryker and Fiona meet it is not during the best of circumstances more like wrong time wrong place. When Ryker sees Fiona something inside of him just knows he can&#039;t let her go and as scared as she is of him she doesn&#039;t want to go. What you see is really two people one good and one bad see that their lives really are no different. As much as this book can be dark and somewhat scary you are hoping for the HEA and the light at the end of this dark tunnel.

A moving often violent story of Ryker and Fiona. The struggles they have endured, the ability to come out the other side, maybe not unscathed or fully whole by life&#039;s heartaches and misfortunes but still able to continue on. It is a dark story but it is a great story. Alot of times we assume bad people are always bad people but we can never assume this as ultimately we don&#039;t really know, but possibly like this story sometimes you just need to meet the one person wheter this person is good or bad to make you both complete. It is s a great read. Would definetly recommend it.

Break Her by Jenika Snow and Sam Crescent

Bad to the Bone by Sam Crescent