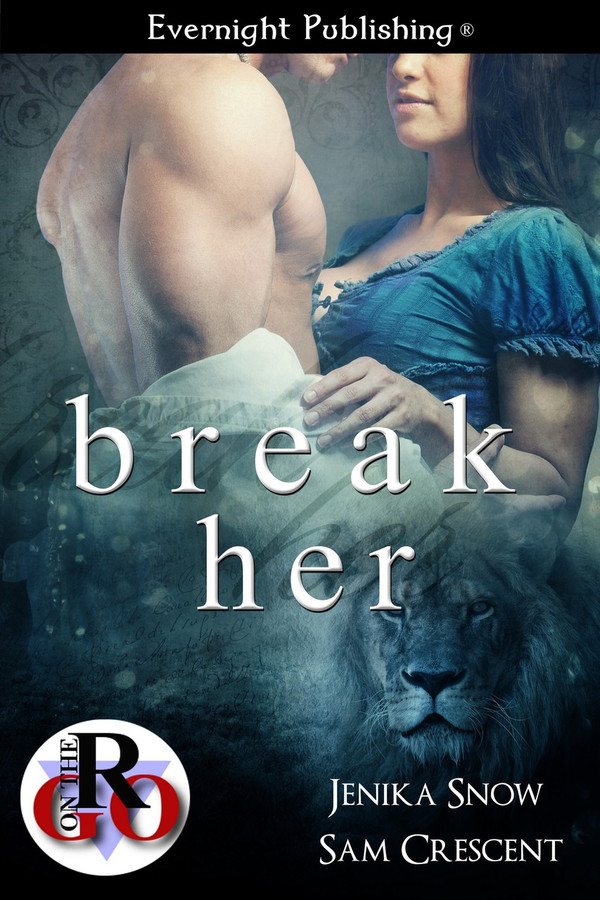 Garrison has wanted Odessa for as long as he can remember—so he waits for her. He waited for her to turn eighteen, and waited for her accept the type of dominance of his lion. She won’t easily give in to become his mate, but he's not going to stop until he claims her for his own.

Odessa wants Garrison but he scares her. He’s strong, dangerous, the pride’s enforcer. She’s witnessed him with blood on his hands, and part of her likes it.

To claim his mate he must break down the walls she’s wrapped around her heart. Garrison will break her, and show her that he might be a monster, but when it comes to her, he’ll treat her right.

Garrison hoped she’d run even though a part of him wished that she’d stay. Whenever it came to Odessa he was always conflicted. There would never be another woman for him. Odessa was going to be mated to him, and because of that, he couldn’t bring himself to let her go. Even though he loved it when she turned her back on him, as he got to see her lovely ass, and Odessa never failed him in that department, just once he’d love to see what would happen if she just stayed. For the last two years when she’d tried to make herself less attractive to him, ignored him, and made it seem like she wasn’t interested in mating, she’d only served to enthrall him more. No other female held his interest. He lived, breathed, and dreamed about Odessa, and had done for the last two years. He needed her, wanted her, and was going to have her. The scent coming from her was making him hard as fucking rock. Her scent was one of the reasons why he didn’t stop chasing her. She wanted him even though she denied him. In fact, whenever he saw Odessa, scented her, he was hard for her. His dick didn’t know when to stop, and he never put up a fight.

“I’m not your mate,” she said, biting out the words between gritted teeth. They didn’t have fated mates, but when a lion found that one female who was theirs, who would be theirs, then nothing stopped them from having her.

He smiled. “Fight me, little lion.” He moved his hand from the trunk of the tree to place it on her shoulder. Compared to a lot of pride females, Odessa was curvy even after all the training she’d undergone. Garrison loved her fuller curves, loved the bumps and dips that made her all woman. When he did finally take her, she’d fight just enough so he’d have to use force, but within moments, she’d be screaming out her pleasure. This wouldn’t be when he claimed her virginity. No, he’d take his time and love her body the way she deserved. He could wait. Until that moment, he was going to give her a little taste of what it meant to be owned by him.

“You’re fucking sick, Garrison, obsessed, and to the point of being a stalker.”

He didn’t respond, because it was the truth. He was obsessed with her, wanted to posses her, own her … claim every part of her. He brought his hand down over her full tit. Her nipple poked against his palm letting him know she was just as affected by him as he was her.

Pressing his cock against her stomach, he made her aware, without shame, how hard he was. Garrison wanted to show to her how beautiful she was, what her body alone did to him. “You think I’m sick? I’m not the one who has been turned on by the sight of blood. The destruction I can cause with my bare hands.” To prove his point he rested his palm around her neck, pressing slightly cutting off a little of her air. She didn’t look frightened. The scent of her arousal intensified. “I could hurt you, and no one would ever know it was me, wouldn’t even question it. I’m a bad male, a dangerous, violent lion who has to be this way in order to protect what I hold dear. But I don’t want to hurt you, Odessa. I never want to hurt you.” He inhaled deeply, loved she was growing even more aroused. The truth was, he’d never hurt her. He loved her with all of his heart and soul.

He released her neck. Odessa didn’t take a deep breath. She simply inhaled.

Garrison smiled, placing his hand between her thighs, and touching her heat he felt even through the fabric of her jeans. “I want to fuck you, to claim you. I want to make you mine, Odessa. I’m not going to fuck you though, not even when I know this virgin cunt is begging for some hot cock, for my big cock.”

She went to hit him, and he caught her wrist, trapping it against the trunk of the tree.

Great read. Took awhile for them to get together. Once H asks to mate with her, there is no one else for him. Good story. Bookshelves/tags: get-together-stay-together, hea, love-how-he-loves-her, no-cheating, no-ow-om-drama, push-pull, read, safe-read, virgin-heroine

An absolute delight of a short sexy read by these two tremendously talented authors! I loved every word of this story as we watched as the powerful pack enforcer Garrison fought for the love and to become the mate of the one woman he has wanted for years Odessa. He first had to wait for her to become of age which in this pack is 18, then another 2 years of trying to break down all of the walls that the beautiful and strong willed Odessa placed around her heart. But if any shifter could do that it was going to be Garrison, a male of worth at every level and what a fabulous read this sassy sexy pair make! I wished the story was longer but that is something I always wish for when it is something written by either of these two authors and I hope that we can return to the pack and see others form bonds and also perhaps revisit Garrison and Odessa over the future. As I think seeing Garrison in action deserves a whole new book just for him! That would make for a wonderful read! I hope you enjoy this as much as I did! Happy Reading!

I love Jenika and her books, I really loved this book and the characters. I hope she writes more shifter stories.

This was a great short read. It had all my favorite elements....touch of dark &amp; hot/heavy romance! Garrison knew what he wanted &amp; once Odessa gives in the sparks fly. I recommend this book to anyone who is looking for a sexy hot romance &amp; a quick read. Awesome job!!!

Romance on the Go series. This book contains a really good short story. A very quick enjoyable read. A little bit rushed toward the end but still gives you a complete story with great strong characters

This is a very short and sexy romance. Garrison is pack enforcer and knows who he wants and is determined to claim her. A really good quick read.

I am never disappointed when I read her books and this is another hit for me. To see the two characters finally come together and end with an awesome life together always gets to me great job Jenika ya did it again!!!!!!