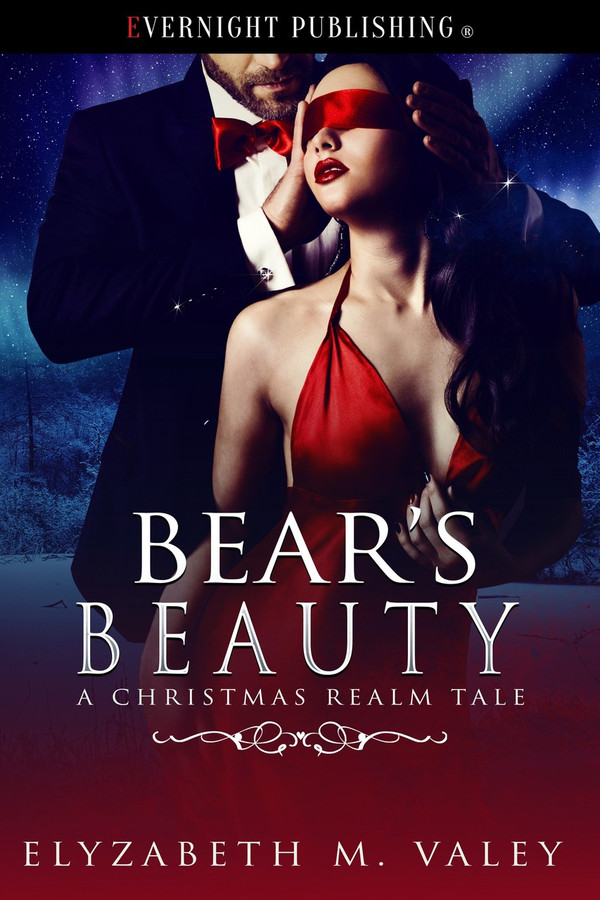 A rare mix between a pixie and a human, Melody Beacon is not your ordinary woman. Challenged all her life for not being one or the other, she considers herself unlovable. So when Magnus Koldklaw tries to seduce her, she can’t help but think he’s mocking her. After all, why would a man like him want to be with a woman like her?

One look at Melody Beacon was all it took for bear shifter Magnus Koldklaw to decide he wanted her. One whiff of her scent, and he’s certain she’s his mate.

Unfortunately, Melody doesn’t seem to feel the same way. However, when they’re forced to work together on a secret project for Santa, they are irrevocably drawn to each other. And when Magnus discovers it’s her insecurities keeping them apart, he becomes determined to show her she’s worthy of love and so much more.

He pressed the call button. Melody picked up on the second ring with a flustered hello.

“What were you writing, little one?” he asked, modulating his voice.

“Don’t hide from me, Melody,” he said sternly. “Relationships are all about communication. I’m not going to judge, sweetling.”

Magnus’s ears perked. Was his mate opening up to him?

“There’s nothing to be ashamed of. Tell me,” he coaxed.

Adrenaline spiked in his system, immediately drawing only one conclusion. Blood rushed to his dick fattening it.

“Having sex,” she said quietly.

“Having sex?” he echoed.

Magnus groaned. This was going better than he’d envisioned.

“Little one, don’t ever apologize for fantasizing. God, do you know how hard you’ve made me?”

She giggled nervously on the other side of the line. “I have?”

“Absolutely. What are you wearing?”

“T-shirt and undies. Not very sexy.”

“Are you kidding? No bottoms? No strange tops? Sweetling, I’m imagining you right now.”

“And you?” she murmured.

“Slip boxers, but I’m going to take them off soon.”

“Yes, and so are you. Tell me something, little one. Were you touching yourself?”

“Yes,” she finally confessed. “I wish I’d asked you upstairs or we’d done something at your office.”

“I don’t,” Magnus said. “Because otherwise we wouldn’t be having phone sex right now.”

“We’re not having phone sex.”

Magnus laughed darkly. “But we’re about to, my little sub.”

“I’ve never done it with the lights on. In my previous relationships, they never wanted to. They always said it wasn’t necessary. They didn’t care.”

Magnus ground his teeth. Bastards unable to appreciate the beauty of his mate had made her into a fearful woman, ashamed of herself.

“I care,” Magnus said vehemently. “I know I want to see you, Melody. All of you. I want to be able to gauge your reactions, watch your body flush with pleasure, your pussy weep for my cock. I want to penetrate you and see my cock disappear into your cunt.”

She gasped at his crude choice of words.

“I’m not there right now, little one, and it’d please me immensely if you tried turning on a lamp. What do you say?”

“Then, do as I say, little one. Set the phone on speaker and go switch the lights on. Take your clothes off.”

There was silence from her end except for the rustle of what he assumed were bed-clothes. He took the chance to remove his own underwear. Patiently, he waited. He had no doubts about Melody’s attraction, but he understood she needed to move at her speed. His mate had to learn to love herself as much as he already did.

“Good girl. Describe yourself to me, little one. Tell me about your breasts.”

For long seconds there was no response.

“They’re large,” she finally said, the trepidation in her voice raw. “A bit droopy, frankly. The areolas are brown, the nipples long and wrinkled.”

Magnus made a noise at the back of his throat. Her description wouldn’t do at all, but he’d be more than happy to guide her.

“So, heavy breasts which will fill my palm. Chocolate colored areolas with turgid nipples begging for my touch. I can picture them, little one, and my mouth is salivating. I want to squeeze your tits and then suck them into my mouth, paying special attention to those rock-hard tips.”

“Magnus, the way you describe them—”

“Is the way I see them. It’s the way they are, Melody. Touch them for me,” he demanded. “Pinch and twist them. Do you like that?”

“That’s it, little one. Massage them. Can you feel the weight of my palm, my fingers digging into your flesh, possessing every inch of it?”

“Good. Look lower,” he ordered. “What else is there for me to claim?”

Again, silence stretched between them.

Melody has spent her life in the shadows. Voices of the past constantly barrage her until she can no longer believe she is worthy. She was always left believing she was nothing men were looking for, until Magnus. Magnus has found his mate but she has been hurt by the men in her past. He tries to be patient because she knows nothing about mates, but his inner beast is becoming restless. Will Magnus be able to be the man she needs, or will he show her the man he is? Melody wants Magnus but is unable to believe he wants her until it just may be to late. Will these two find a way together, or will Magnus forever be without his mate? I enjoyed visiting Christmas where the paranormals who help make the magic happen. Magus is hot and his driving for Melody pushes the story over the top with insta-love and lust. The writing was good and never detracted from the story. It was easy to read and hard to put down; give Magnus and Melody a read you will not be disappointed.

Melody is convinced no one would want a pixie/human mix. After all, past relationships seem to have proved that beyond any doubt. She wasn’t expecting her reaction to Magnus though. He knows she is his mate, but gives her the space and time she needs to work through her doubts and fears. This was a brilliant story from start to finish. Although this is the second book in the Christmas Realm series, I don’t feel it impacted my enjoyment of this book at all, even though I haven’t read the first one. The realm is exciting and intriguing, with many other couples and species to enjoy. This story is smoothly paced, and flows exceedingly well. It takes place during a relatively short period of time, but it doesn’t feel rushed in any way. A thoroughly enjoyable story with a hint of BDSM, but with a romance that will light up the room. Absolutely recommended by me.

We’re in a world of Santa, elves and pixes. There’s also shifters and mates. That’s exactly what happens when Magnus sees Melody. He knows she’s his mate but Melody is a half pixie. How can anyone possibly love her? Melody has no self confidence being half pixie so she doesn’t understand Magnus’ interest in her. Magnus knows she’s his mate from the first moment they meet. The Santa world is a cute addition. I like how Santa has an app and that there’s a real problem with marketing. Comedy comes off subtle and entertaining in this story. The romance really shines through. I absolutely love that even though they’re mates and that they’re attracted that the romance is a slow sizzle. It doesn’t feel rushed or slow but it’s the perfect pace to get you hot and bothered. The sex is seriously hot! They have such great chemistry. ​ Bear’s Beauty is a sexy tale you can read all year long!

Love this Christmas realm Elyzabeth has created. Fun and sexy!

Beauty in the Beast by Elyzabeth M. VaLey

The Beauty of Forever by Elyzabeth M. VaLey