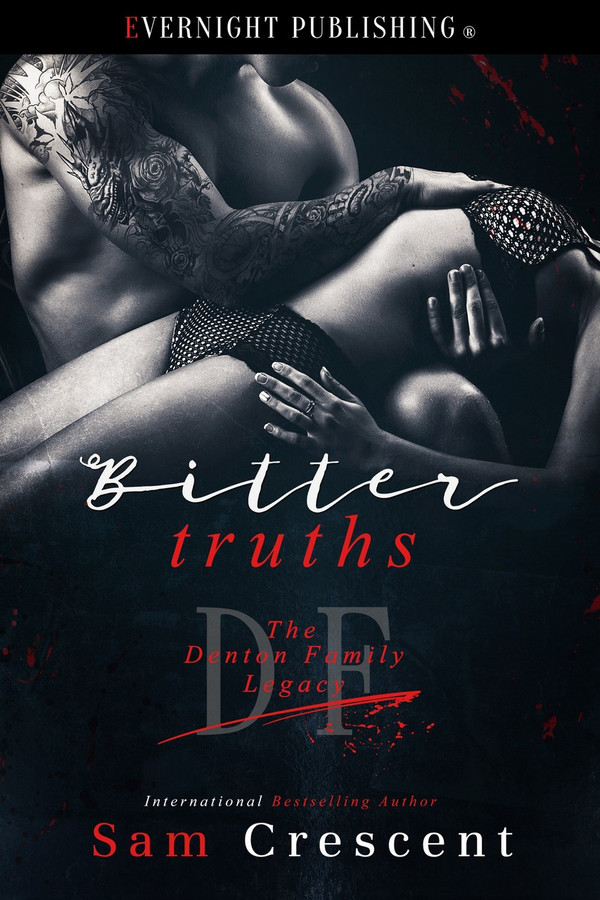 Ruby Santos mistakenly believes the Dentons killed her brother. For the past ten years she has been training, forgetting her own wants and desires to kill the men responsible for taking the ones she loved. When she strikes at Oliver Denton, she never expects to be the one chained up by the end of the night.

The woman destined to be his wants to kill him. It’s just typical. But Oliver can’t let her go, and the more he gets to know Ruby, the more he realizes that she is perfect for him. He will do everything he can to bring the justice that she seeks.

Against all odds, Ruby finds herself falling for the crazy Denton. Yet how can she have a future with a man she once wanted to kill? But when the truth of her family’s killer comes to light, it’s not the only thing that comes out of the Denton closet. Their greatest enemy could tear the entire Denton family apart and Ruby with them.

“In the alley, when I finally saw you, I knew you were mine. The woman destined to be mine.”

Ruby froze, not knowing if this was something insane, and crazy. Instead, she went with laughter. Putting a hand to her stomach, she pointed at him. “Ha, ha, ha, that is so funny. You’re so funny.”

He didn’t laugh along with her.

“It is supposed to be funny, right?” she asked.

“My life? You’re telling me that some kind of freaky curse on your family, and now you’re claiming that you want me? That I’m supposed to be yours?”

“And you expect me to be okay with that?” She didn’t know what this man wanted from her, and right now, she really didn’t care. The timer went off, and she moved away from him, taking the bread out of the oven, and placing it on a cooling rack.

“You have to be okay with it.”

“Okay, so let’s deal with this logically.” She spun back around to face him. With the new clothes, she felt like herself. “You’re saying to me that your family, all of the Dentons, have no choice in the women they fall in love with. It’s fate? Destiny? Some freaky shit?”

“Yeah, even my parents.”

“Wait. He had a kid with a woman, and she’s not even the right one? What happens when he find the right woman?”

“Exactly the same as my uncle Stuart.”

“What happened with Uncle Stuart?” She couldn’t believe what was happening right now.

“He married his high school sweetheart, and then discovered his woman was the nanny, or the babysitter.”

“Yeah. So he ended up breaking hearts, and it caused a lot of trouble.”

“I can’t believe it.” She rolled her eyes, hoping he detected the sarcasm in her voice.

“I can’t deal with this right now.” She held her hand up, silencing him, and then leaving the kitchen.

Of course, Oliver followed her. “You can’t fight this, or walk away.”

“I can do whatever the hell I want.” At the doorway of her new room, she spun around to glare at him. “You’re not my boss. You’ll never be the boss of me, and right now, I really don’t want to talk to you.”

“Yeah, Mom, Lou, and Harper, even Michelle came around. You can’t resist it.”

Stepping back, she glared at him. “Resist this!” She grabbed the door frame, and slammed the door in his face.

She wasn’t some kind of machine, and there was no way she was going to be putting up with his crap. Not now, not ever.

I love this series, I started reading the first one and I had to continue on to the next book. I love the men and there curse. It&#039;s a MUST read.

Love this series! Sam is awesome w\ MC&#039;s, and, she brings the same flair of raw srories, sexy overbearing alphas, strong empowered women, all tied to a great story in her mafia books.

The Denton Family return and this time it is Oliver who will fall to the family Legacy. Oh how I love these books! Filled with strong alpha males, feared by many but fear only two, their woman when they find her and their mother! Its a great read filled with action, humour, passion of the charts and pure alpha male goodness in the form of the Denton Men. The chemistry between Oliver and Ruby is strong, but there are some issues of misunderstanding and confusion Ruby needs to work through before she can fully embrace the passion and power of the Denton Legacy and accept Oliver and give herself to him in every way. Another great edition to this fantastic series also containing glimpses of the other characters and still involving all members of the Denton Family. With teases of twists and turns to come in the next installment it leaves you desperate to know which brother will fall to the Legacy next! I loved every moment of this book and so will you! I highly recommend reading them in order to appreciate the Denton Family in all of their glory. Happy Reading!

First I love that Sam Crescent gave us Oliver&#039;s fear of bugs!! Men alway act all macho but when theres a spider or roach involved they turn into sissy lalas lmao!! The proposal scene was hilarious... I loved it!! My only dissappointment was that Ruby wasn&#039;t the usual curvy girl Sam Crescent gives us. A part me understands Ruby&#039;s need for revenge helped her no longer be the chubby girl but I&#039;m still a little miffed lol I need Damian or Landon or any other Denton story soon Sam Crescent!!

I voluntarily reviewed an Advance Reader Copy of this Book This is the third story of the Denton Brothers. And the curse strikes again. Ruby has lost her whole family one terrible night. Her family was friends of the Denton family and her brother just found out who the mole is in their operation. And for that he had to die. But they didn&#039;t kill everyone, they missed Ruby. And all Ruby heard when she was holding her dying brother was the name of the Denton&#039;s and she thought her brother meant they did it to him! So she swore that she would get revenge on this family Oliver is the ruthless one of the Denton Family and when he meets Ruby he can&#039;t believe that the curse striked and the one meant for him is the one that wants to kill him Ruby gave Oliver a hard time, and I enjoyed that! I love when the guy actually has to work for the females love Oliver and Ruby were a perfect fit, and I really enjoyed their story And that ending, HOLY SMOKE Didn&#039;t see that coming Now I can&#039;t wait to read Damain&#039;s story or Landon???

OMG!! Oliver and Ruby&#039;s story is my favorite in this series so far. This just shows how one misunderstanding can affect your life in ways you can&#039;t even imagine. I love the whole story about the &quot;curse&quot; and the twist in the plot towards the end was just mind boggling! I love this book and am hoping that the next one isn&#039;t far away!!!

This is a story about Oliver &amp; Ruby. It&#039;s also about how one misunderstanding can change your life. This is another exceptional book by Sam. I don&#039;t want to give anything away. I read this in one sitting, it was that great.

This is the story of Oliver and Ruby but also we get a little bit of everyone&#039;s storyline. I like how SC can do this without taking to much from the main characters. Ruby&#039;s character intrigues me. She&#039;s tough but vulnerable, knowledgeable but acts on impulse and loving but also a loner. She knows that the Dentons are responsible for her brother&#039;s death. So she sets on a long journey to destroy them starting with Oliver. Oliver knows that she is his and he must show her that his family wasn&#039;t responsible for her brother&#039;s death. At the same time he must make her fall in love with him and deal with the trader in their mist. This book has a lot of twists and turns, up and downs and plot surprises. Of course I couldn&#039;t put it down and I can&#039;t wait for the next one. Yes this is the third book in this series but you don&#039;t need to read the first two to understand. But if you would like to start at the beginning book 1 is Broken Promise and book two is Shattered Vows. Happy Reading