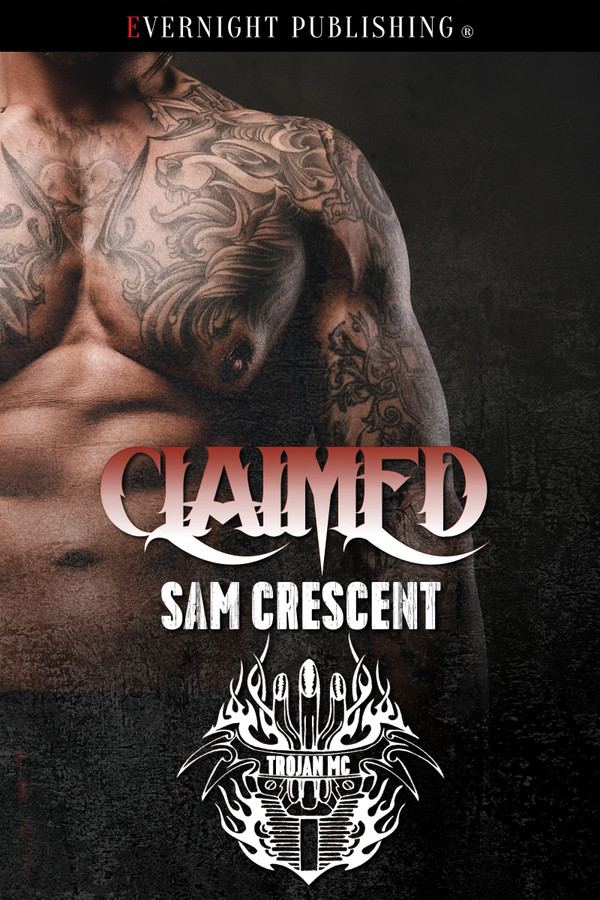 Landon doesn’t stay with the same woman twice. They’re to be used for his pleasure, and he’s never seen a reason to ever fall in love.

Anna Rose is not looking for a relationship. She would rather move from job to job, sew, and live her life with few problems. Men cause problems. When her best friend demands she attends a Trojan MC party, Anna knows it isn’t going to end well. What she doesn’t expect is to find a stranger who gets her body racing.

Landon couldn’t get the woman out of his head, and when he finds out who she is, he’s determined to work her out of his system. Only, sex isn’t helping. One taste of her, and he wants more.

There’s no way she can fall for a biker, but with each passing day, Anna can’t deny the pull of Landon. When she witnesses the dangers of the club, there’s no going back. She has to prove her loyalty or they’ll kill her.

Is there any future between them? Or will Landon force her to become his? He’s not worn a condom, and he wants to keep her—what better way than knocking her up?

“You don’t want any dessert?”

“I don’t mind you eating in front of me,” Landon said.

“I don’t have a problem eating, believe me. It’s all good.” She smiled at him. She’d get something more to eat at home. Maybe some noodles, or something else.

“This has never happened before,” he said.

“The food is gone and you’re not lingering for some more time by ordering food.”

She chuckled. “You’ve never been on a date before?”

“No. This took less than…” He stopped to check the time. “Half an hour.”

He looked completely gutted to have had such a small date, and she didn’t want to hurt his feelings.

“How about we go back to my place? I’ll make you some tea.”

“If you want coffee we’ll have to stop by the store. I don’t keep any on hand. I drink tea.”

Anna grabbed some money out of pocket, but Landon stopped her.

“There are some things I’m capable of doing. Let this be one of them.”

She wanted to argue with him but decided against it. Even as she tried to ignore the whispering, there was no way she’d be able to as they were more than happy to glance, point, and talk.

People were so rude. This was just another reason in an endless list of reasons why she liked to keep her own company.

Climbing on the back of Landon’s bike, she held onto him as he took her back to her apartment building.

She’d never had a man come back to her place before. The men before him who she dated randomly, she either went to a motel or their place, sneaking out afterward. This was her space to be herself without trying to put on any shows.

Landon parked his bike, and he took her hand as they walked into the building. She typed in the code, the only security system within the block.

The elevator worked, but she always took the stairs, going toward the third floor.

Pulling out her key, she flicked open the lock and entered her space.

It was still light out, and she closed the door behind Landon. The main living room was her sewing space. No television, just sewing and her dressmaking mannequin.

“You weren’t kidding about what you did,” he said.

“This is everything I do.”

“Doesn’t this freak you out? It’s like a body without a head.”

She laughed. “I’ll make some tea.”

Her hands shook as she filled the kettle.

Every now and then, she chanced a glance over at Landon. He was staring at her fabrics and space. With their cups made up, she turned to find him at the kitchen.

“You have a nice space.”

He took a sip of his tea, and she saw he liked it, taking another sip.

“I make you nervous?”

He stepped into the kitchen. She didn’t move back but watched as he stalked his way toward her. He wasn’t coy about it either.

He stepped right up close. The tips of his toes touched hers, and she tilted her head back to look up at him.

His hands brushed her hips, sliding up just a little. The backs of his fingers teased across her breasts as he pushed some of her hair out of his way.

“Why don’t you try and find out?” she asked.

For several seconds he didn’t move. She was leaving this to him.

She licked her lips, and he let out a groan.

His mouth slammed down onto hers, and she gasped, moaning as he kissed her hard.

Omg I have never had a Trojan favorite but Now Landon has become that!!! the man whore has fallen!!! Omg so sad I finished this one.

Landon and Anna&#039;s story was great. They went into the relationship not wanting anything but fun times but you know how things go. Feelings change and suddenly, there is more than what they thought there would be. Danger, drama, intrigue, of course that comes with being in an MC but when Anna is hurt, will the club and Landon get revenge for her? Or is she just someone they don&#039;t consider family? Get the book and find out for yourself!