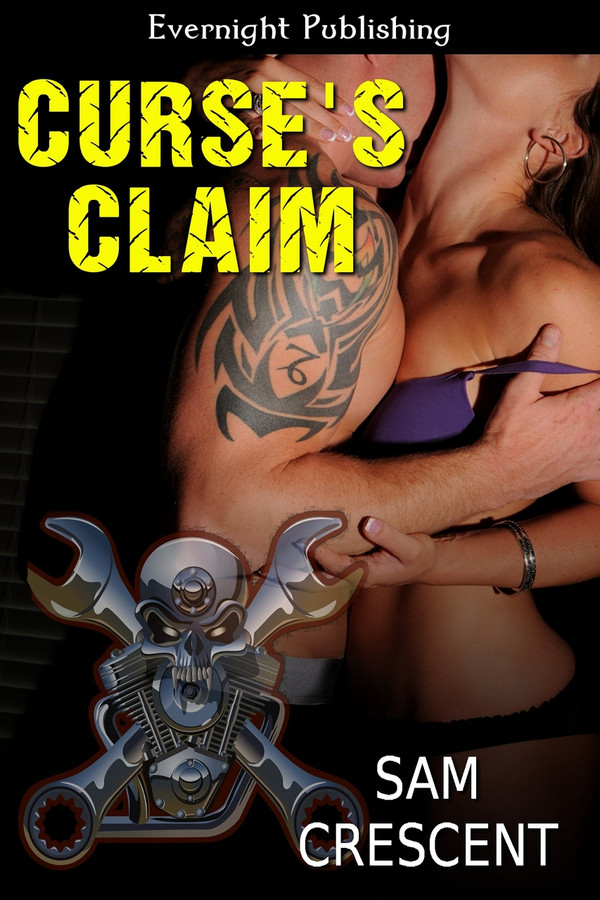 Curse rarely deals with complicated women. Chaos Bleeds is the only place where his loyalty lies. He loves women and he certainly loves to give them a good time. Nothing was ever going to change him or force him to want anything more than what he had—then he met Mia and everything changed.

Mia cannot think about the future. Between caring for her mother and trying to take care of all of her medical bills, she doesn’t have time for anyone else. Her past holds her back. She did something awful to protect her friend but she doesn’t know how long she can handle Curse’s seduction and keep away.

He will not take no for an answer and is determined to claim this complicated woman for his own. When Mia is attacked and Curse kills the man to protect her, they have no choice but to rely on each other. However, this kill is about to set off a turn of events that’s going to land Chaos Bleeds in further trouble.

“I wouldn’t call you a whore, just desperate for money.”

“I can take care of myself. Stop bugging me. Nothing is going to come of it.”

Stepping closer, he sank his fingers into her hair pushing out the clips that she’d bound her hair with. He cupped her hip with his other hand. Claiming her lips, he moaned as she cried out. Slamming his tongue deep into her mouth, he deepened the kiss, holding her tight.

His cock threatened to split his jeans, he was that hard. She started to push him away, fighting him. Curse refused to let her go. In a matter of moments she stopped fighting him. Her hands gripped his shoulders before moving up to wind around his neck.

Not moving, he drew her closer to him. His cock pressed to her stomach, making his need known to her.

Mia needed to stop. This man before her was deadly. He’d take over everything she ever knew and consume her body. Every time he came around, he made sure for her to know his intentions. Now he was offering money for her to sleep with him. What hurt the most was the temptation of earning more money. She hated it. Working at the diner and cleaning houses whenever she got the chance, she still struggled to make ends meet. Her mother’s prescriptions, medical bills, and living expenses were making it impossible for her to keep up with expenses. If she was ever poorly and needed time off work then she’d be screwed. Her life was all about living on the edge of surviving. Ashley tried to help her out, but Mia couldn’t accept any money without working for it.

Curse’s tongue met hers, and she was lost. He wasn’t wearing a shirt, and his entire ink covered chest was on display. His arms were so thick that as he held her, she felt delicate in comparison.

His cock pressed against her stomach. The waitress uniform she wore didn’t hold much protection against his searching cock.

Sinful words that she knew she couldn’t fall for. Biting her lip, she shook her head. “No.”

He walked her back until she was pressed against the brick wall. Most of the town was nervous around the Chaos Bleeds crew whereas they didn’t bother her. They were part of the town like the drugs and prostitutes were. Since her father abandoned them, she’d learned not to care what other people felt. The Chaos Bleeds crew was not dangerous unless women wanted to stay virgins. She was used to men giving her the once over then moving onto Ashley. Her friend loved men and the attention she got whereas Mia always liked her own space.

Having a boyfriend had never appealed to her as they wanted time, time she couldn’t afford.

She never expected him to find out. The waitress uniform came down to her knees. The hand on her hip slid under her uniform. He skimmed her inner thigh with his fingers.

“What the hell are you doing?”

“I’m going to see if you’re lying to me. I hate being lied to.” His palm cupped her pussy, and he cursed. “And you’ve been lying to me.”

Tell him to stop. Shout at him, curse, and get him away.

He moved her panties aside and ran a finger through her slit. The instant he stroked across her clit, she was lost.

Mia and Ashley are really good friends but really different. Curse falls for Mia and will do anything for her. Curse was so protective of Mia. This was a really good book and I am enjoying this series with The Skulls and Chaos Bleeds.

Yet another great book from Sam Crescent! Curse&#039;s Claim is the third book in the Chaos Bleeds Series, and yes, it does better with each one. This one was sexy and exciting and it was every bit as good as I&#039;d expected. Curse made a fantastic alpha hero. He&#039;s possessive and bossy, sexy as sin with a dirty mouth just the way I like them. He doesn&#039;t usually go for high maintenance women but yet he wants Mia right from the start. He makes up his mind and goes after what he wants. Now, Mia wasn&#039;t exactly the good girl everyone believed her to be. She&#039;s a naughty girl when she wants to be, and wouldn&#039;t you know it, she&#039;s got a past. I had some mixed feelings about her because she stayed in a situation that eventually got everyone in big trouble. Of course, it was some good drama when Curse ran to her rescue, but it inevitably got the club in deep with a monster. I&#039;m not quite sure how I feel about that yet. Now, I did like this one, but I&#039;ll admit that to getting a bit lost for a while. Some things were said that made it obvious that something important was coinciding in Crescent&#039;s other M.C. series, The Skulls. Apparently, I have missed a book and that made it hard for me to keep up, so now I have to go back and read the one I missed. Other than that things moved at a fast pace with only a few grammar issues. I&#039;ve found it a bit jarring that this author continually uses the wrong tense on certain words and that perhaps some things could be better phrased. It&#039;s a simple thing that none the less never stops me from enjoying her books. As usual, it had a great plot with lots of exciting things happening. Plenty of captivating characters and absolutely no problem pulling me into the story. Not to mention the scorching hot love scenes! It&#039;s true that this author knows how to create a smokin&#039; sex scene. I&#039;m not ashamed to admit that&#039;s a big draw for me because I&#039;m all about the love and romance. I also felt that Crescent did a good job in setting up the next book that I cannot wait to read. So I enjoyed this book and can&#039;t wait for the next one.

I love this whole new twist! A new really bad bad guy and so much more to come! Each book is so different and so alike. In this one we see Curse fall for an ice queen in disguise, Mia. Mia is fighting her past and Curse is fighting her to let go. So much happens, that I didn&#039;t want to put the book down! It&#039;s has action, friendship, family, and of course lots and lots of hotness! I can&#039;t wait for the next one!

I love Sam Crescent&#039;s MC books and this another good one from her. It&#039;s a quick read and I would have like to have seen Curse and Mia&#039;s relationship develop a little more but I really liked the book and am looking forward to the next one.

I so waited for Curse&#039;s story. And was not disappointed and that should be no surprise here. After all it&#039;s Sam and she never disappoint her reader&#039;s. Curse...Well he was hot alpha crass a*****e. And even though that was annoying sometimes, but theres no denying that that also what was so hot and so much captivating about him. Did I mentioned he was hot? No? Well he was. Mia has her demon&#039;s that haunted her from prom night. And that&#039;s was a reason why she pushed all feeling&#039;s and relationship&#039;s away. But Curse didn&#039;t let that stop him and he claimed his woman. Thanks to him she started to laugh again and have fun. In bed too ;) But because Curse killed the one who attacked Mia, Chaos Bleeds now are lapdogs (And I hate that very much. How dare he leash those free spirits!!!). And no doubt in the next book&#039;s we gonna see the consequence&#039;s. Hope they gonna get ride of the leash soon. And this book&#039;s epilogue are killing me (Sam doing that all the time. And at least I love it ;) ). So wanting my hands, like NOW, on Blind Devotion. BTW now I understand why name the book that way. Its going to be so awesome!!!

To Claim His Girl by Sam Crescent