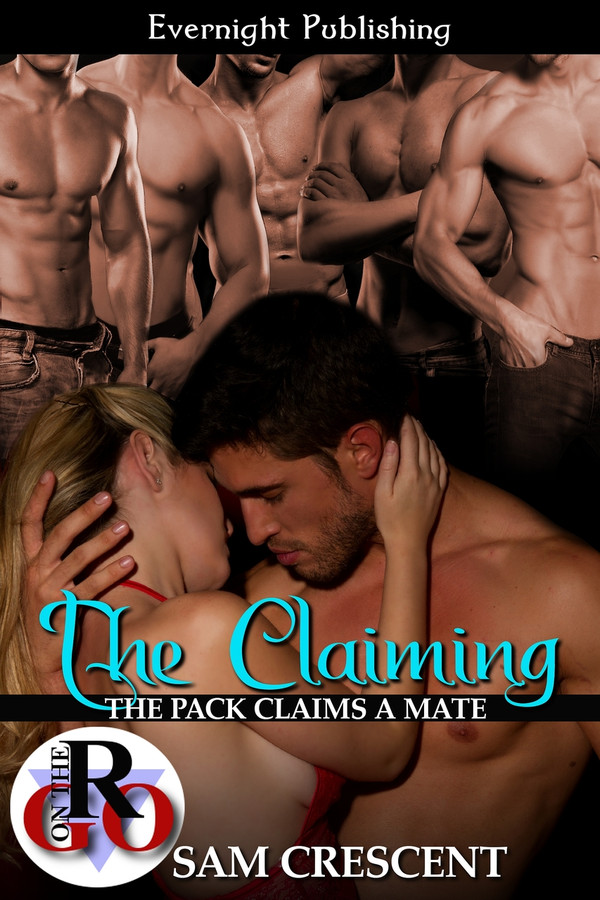 The Pack Claims a Mate, 1

The laws of the moon state each alpha must pick a mate before the age of thirty-five. If no mate has been chosen for the alpha and his pack then the beast takes control for eternity.

Tom has one year to find a woman, claim her, and bind her to his pack. His brothers do not believe in the curse but he does. Time is literally running out. With each passing moon he feels the control of his wolf growing stronger. He needs to find the woman destined for his pack.

Kitty Evans has been dealt a bad hand. After her mother died swallowing up what little money she had, Kitty has been living from place to place, never settling down.

After one brief encounter, Kitty is bound to men who could be her salvation. Can she really give herself to six men?

It hadn’t been a week, and yet she was falling in love with them. Tom was so dominant that he grabbed her attention from simply walking into a room. She knew he was the alpha. Stuart, during their time together, explained all the finer details of the pack. Tom was alpha, with Roy as the beta and the next in command going down the line. Joey was the youngest as he was born minutes after Mark.

If she went through with the claiming she’d have all six men at her mercy. She smiled thinking about having all of their hands and gazes on her body. Kitty wasn’t a small woman, not at all. She had curves, and she loved food, always had and always would.

Shaking, she closed her eyes thinking about what it would feel like to have all six men caressing her, stroking between her thighs or against her breasts. She let out a moan, squeezing her thighs together to stem the flow of cream she felt pooling out of her cunt. Fuck, she’d not been this turned on for a long time. Her hands shook as she reached out to the window frame to hold on to.

Opening her eyes, she looked behind her to see the man who’d taken her from the boring world she lived in to the orgasms and love he promised were in her future. Taking a deep breath, she kept her gaze on him at all times. He walked further into the room.

“Yeah, I can scent that sweet cunt of yours flowing. You’re killing me with need, Kitty. I want to be a kitten to you and lick you until you scream against my mouth.”

Her nipples tightened at his words.

Within seconds his hands were on her hips pulling her closer toward him. She didn’t resist him. Kitty wasn’t afraid of the man in front of her. He’d shown her more kindness than she ever expected from him.

This was like a fairy tale story where she’d been taken by a beast but fallen in love with him at the same time. There was more to Tom than the domineering alpha. He was sweet and always took care of her. In his arms, she felt cherished.

His hands moved down to her ass, cupping her cheeks tightly.

“Stop getting turned on,” he said, growling against her ear.

The Claiming is a paranormal story with some romance. This story grips you from the beginning. The characters are strong and the pacing seems just right. I don&#039;t believe there was ever really any conflict in the story, at least not really. The dialog seemed strong and helped to move the story along. This book is a great read, but you do have to bear with the adult situations. Tom is a werewolf and is trying to save his brothers and himself. They are their own pack and they need a mate. There is a curse on their heads. Tom is the oldest. If he doesn’t find a mate for them by the time he is 35 they will all be wolves forever. Kitty is all alone in the world without a penny to her name or any family to speak of. She has never really had a real home since her mother died. Now she has a chance, a crazy one, to have a home. The only catch? She is to be the mate of 6 men. I loved this book. I wasn&#039;t sure I would, but it surprised me. I hope this author writes a story for each of the brothers as they try to break their curse. I would love to read every one of them.

Tom Snow was preparing to return home when a scent from the bus platform drew him. His mind screamed mate, but he was unsure if was real or was it just desperation. He needed to find a mate for his pack before his thirty-fifth birthday or become a wolf forever. Failure to find his mate also condemns his five brothers to the same fate. Allowing instinct to take over when Kitty Evans tries to walk away from him, he grabs her and kisses her into unconsciousness. When he arrives home his brothers, Roy, Stewart, Mark, Joey and Guy are unsure if Kitty is their mate and know the final decision is up to her. With the full moon just two weeks away, time is running out. Can the men convenience Kitty to accept them all as mates? Will fear make her run away? Can Tom accept that his decision to claim Kitty is right and not an act of desperation? Can he follow the rules of The Claiming? Can Kitty? “The Claiming” is a short novella packed with action from the very beginning. Ms. Crescent takes the time to build the relationship between the characters instead of relying on the erotic elements to carry the story as some erotic authors do. Same Crescent does give us a hot, bone melting love scene. It leaves us panting for more. The evil part of the book is that we need to wait for the next novella to learn what happens next. I am looking forward to its release to learn more of Roy and Kitty’s bonding time. This is a great novella for a little mid-day break in the routine.

This is a short book, but it is the prequel to the series. Tom is such a tortured soul. He is trying to save his and his brothers&#039; lives. Kitty doesn&#039;t understand Tom and his brothers&#039; world. After Kitty accepts the Claiming she has some issues to deal with. Tom is torn apart after the Claiming. I can&#039;t wait to see what happens next with Kitty, Tom, Roy, Stuart, Guy, Mark and Joey.