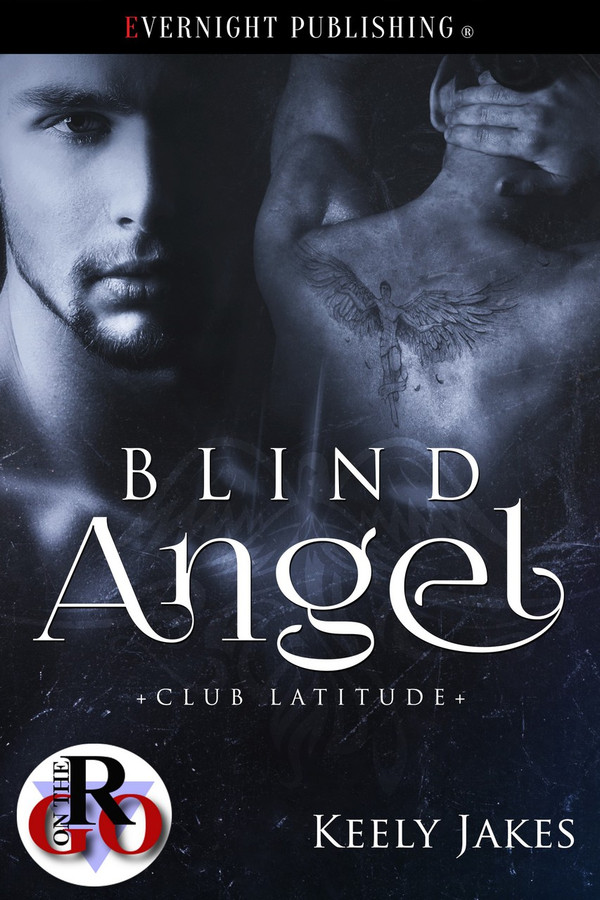 Walking into Club Latitude, Micah Gideon is there as a favor to the club’s owner. He is not looking for a slave for the weekend. The last slave he played with ended up dead. When he sees Jimmy Monroe, his plan to spend the weekend drunk goes out the window. He wants the dark angel wearing a blindfold.

Jimmy Monroe has been blind since birth and wants a Master to share the weekend with. His best friend Rio comes up with the idea of the blindfold keeping his blindness a secret. When he is actually bought, Jimmy finds his dreams coming true. Until Master Micah calls out another man’s name in his sleep.

Will Micah be able to finally lay the past to rest? Will Jimmy find what he needs with Micah? Will the two men find their way out of the darkness?

At the top of the staircase, Micah paused and scanned the room. He had not been up here since that night, and a wave of sadness washed through him as he looked around. Nothing had changed. The walls were still darkly paneled, the floor an almost pearlescent silver granite tile. The bar remained at the back of the ballroom-size room. The side walls were taken up with the play stations. Tonight each station had spotlights shining on skimpily clad men who were cuffed and chained to the wall.

At Club Latitude, members played where everyone could see them, or they took their toy and went home. There was a rule that if a Master left the club with a submissive for private play, both men would call in to the club the next morning. There were no private rooms, just a locker room which was used for after-session cuddling as much as it was for a quick shower and changing clothes.

As he crossed the room, Micah glanced left and right, dismissing each chained male as too skinny, too delicate, too blond. His last boy had been blond. His stomach clenched at the thought of playing with another flaxen-haired beauty.

He stopped at the last station on the left before the bar as a raven-haired slave caught his eye. Tall, broad, well-muscled, and tanned, the strong light glinted off what little hair the man had. The sides were super-short and the longer top had been spiked, adding an additional inch to his height. The silky white G-string that encased his cock contrasted nicely with his burnished gold skin.

The black mask covering his eyes was unusual. Checking the others, he saw none of them were blindfolded. Did this play into the boy’s kink? Or was there another reason he wore the mask?

He could work with that, Micah thought before freezing. Was he considering taking this boy home?

His cock jerked and began to fill as the submissive beauty turned on the order of two men who were looking him over. That’s when Micah saw the wings. A foot-wide tattoo centered between his shoulder blades was the detailed wings of an angel. There was another tat on his left ass cheek, but Micah couldn’t make it out from this distance.

Without considering what he was doing, he approached the station where the dark angel was secured. By the time he stopped, a foot from the man’s back, he had changed his plans for the weekend. Something about those wings called to him, made him want to see them move as the slave danced under his toys.

“You’re mine, angel,” Micah said, his voice pitched low and just above a whisper. “I can already see you strung up in my ropes, your skin glowing from my flogger, your cock weeping as you beg me for a release that I may or may not give you.”

3.5 stars I was just getting into the story, and then I read &quot;The End&quot;. I wish this was longer. I see this is the first book in the series. I wonder if their story will continue or will we have new MCs? Either way, hopefully, we&#039;ll read more about them in the future!

BLIND ANGEL is a great story. It was so easy to feel the emotions and to get completely captivated by the story. It was such a sexy story to read; I was reading it as slow as I could to enjoy the scenes and also to make it last longer. When his last slave died, Micah decided he wouldn&#039;t take any other to home. But when he walks into Club Latitude, he can&#039;t take his eyes from the beautiful man wearing a blindfold. Jimmy wishes nothing more than to surrender to a master. He uses a blindfold to hide his secret and when Micah shows interest in him, all he has wished for, it&#039;s about to come true. The plot was nice, unusual, and very interesting. It had some great characters and it was great to see the way the club was interested in the well-being of its members. One of the things I didn&#039;t like about it was how a part of the story was spoiled since the blurb. I would like it more if the fact that Jimmy was blind would remain as a mystery and the reader finds out until the end. Jimmy was a very mysterious character, but that wasn&#039;t because of his blindness. He had little description about his backstory, and under other circumstances I wouldn&#039;t like a character that I get to know so little, but in this case, I felt it contribute to the intrigue around him. Micah was a nice character to read about; I liked how easy it was to feel his grief and how believable was the way he was captivated by Jimmy. The relationship between them was great; it felt very real. The dominance component was a little soft for me, but it felt appropriate under the circumstances of the story. They shared some very sexy moments together that I enjoyed so much. Overall it was a fantastic story, I loved it. I would recommend it to readers who like BDSM-themed books. - See more at: http://glbt.theromancereviews.com/viewbooksreview.php?bookid=22646#sthash.SGLOu01Y.dpuf

Short and sweet story about a dom trying to get over the loss of his last playmate and a new-to-the-scene blind guy who wants someone who won&#039;t see his disability as a bad thing. The biggest issue here is the length. It was sweet, but I was really hoping for something a bit more fleshed out. Nice afternoon quickie though.