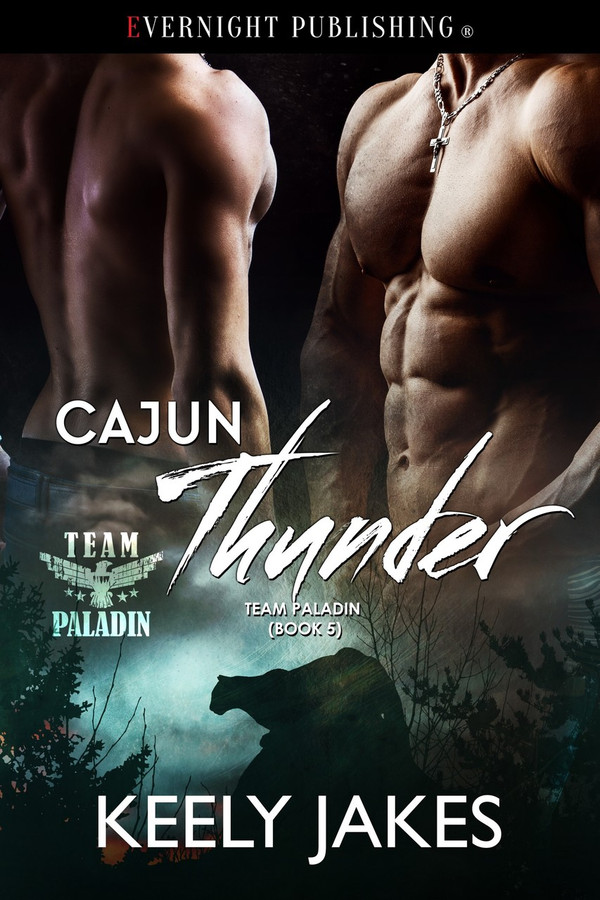 Becker Baptiste is on the run and was sent to Paladin to ask for their help. Exhausted and battered, he is trying to keep his infant niece, Sabine, from being murdered. When he meets a naked man on the road into town, he worries that maybe this isn’t the place they should be hiding from Sabine’s mother.

Roane Jackson had given up on finding his mate, but when Becker arrives with a baby strapped to his chest, Roane realizes his life is about to change in more ways than he can count.

Will Becker accept that the naked man’s claims that they are mates? Will he be able to keep Sabine safe from her mother? Will Roane ever put on clothes?

Becker Baptiste was tired. Hell, he was whatever descriptive came after exhausted. Weeks of struggling to stay ahead of Danielle, the psycho-bitch of a former sister-in-law had a way of wearing a man out. His normally positive outlook was becoming more and more difficult to maintain, knowing that unless someone killed Danielle, he would remain exhausted, stressed to the eyeballs, and on the run.

If things continued, he might end up killing her himself. He would do anything to keep Danielle from getting her hands on Sabine, the sweet baby girl strapped to his chest, who looked up at him with such trust and love in her eyes. It had been hard enough leaving Louisiana for Chicago, hoping the late winter cold and snow would keep Danielle from following, but when she had showed up at his grandmother’s home, he didn’t know where to go next.

Not until Gran had handed him a business card and told him to find a man in Paladin, Montana. According to Gran, Dallas Grant, the bear shifter who had given her the card, would help them. It was the sly smile and wink when she’d said, “And maybe he has an unmated friend you’ll like,” that convinced Becker to climb back on a bus and head west.

Now, with Sabine strapped to his chest and everything they owned in the bags he carried, Becker found himself slowly walking down a narrow dirt road that could use a serious upgrade. He had been about to sit on the suitcase that had slipped from his grasp and rest a while when a naked man stepped out of the bushes. In full protector mode, Becker wrapped both arms around his precious bundle as he pointed out the man’s lack of clothing.

The tall, sexy man looked down at himself, then back at Becker. The tingling zing that shot through his exhausted body shocked Becker. His cock began to stiffen as he watched the naked man’s cock lengthen.

“Yeah, I guess I am,” he said with a grin and wink. “But you still look like you could use some help.”

Moving slowly, the man picked up the suitcase Becker had dropped. He then stepped to Becker’s side and held his free hand out.

Becker knew about witches, shifters, and the other creatures of the world that the humans put down to overactive imaginations of the writers of the world. He even had a good idea why the man was naked, so he ignored the man’s extended hand. He had come this far on his own, and he was determined he would make it the rest of the way to Paladin.

With a hitch of his shoulders to readjust the pack on his back, he then patted Sabine’s back to try to settle her for the rest of the walk into town. When he reached for his suitcases, he found naked man had already picked them up and started walking.

Since naked man was determined to help by hauling his suitcases for him, Becker decided not to fight him. He was just too tired. Instead, he started walking again. It was easier without the extra weight.

“This is the road to Paladin, isn’t it?” Becker finally gave in and asked after nearly two minutes of silent trudging.

“Yes, it is. Are you visiting someone there?”

“Ummm, kind of. Gran gave me a copy of a business card and said to show it to someone named Dallas. She said he and his mate could help me keep Sabine safe.”

Becker had a hard time keeping his mind focused on their conversation while walking and jiggling Sabine. The six-month-old baby had decided that she wanted out of the chest carrier. He couldn’t blame her. It had been several hours since he had last changed her, and it was no doubt past her lunchtime as well. But until they reached town, she would just have to suffer. It wasn’t as if she was the one walking with a forty-pound pack on her back and another fifteen pounds strapped to her chest.

At soon as the thought ran through his mind, yet another wave of smothering guilt washed through Becker, settling in his heart and gut. None of this insanity was Sabine’s fault. She had not asked to be born to a mother who was crazy enough to join a cult and start thinking that killing her baby would gain her and her friends some kind of over-the-top voodoo power. The fact that she had already gotten away with killing Sabine’s father when he tried to stop her was bad enough.

Now, sweet little Sabine was stuck with a gay uncle who was not brave enough, smart enough, or strong enough, to protect her from her mother’s insanity. Instead, Becker had stolen her from her crib in the middle of the night and dragged her across the country in hopes of keeping her safe and alive.

He just wished he knew how Danielle had been able to track them to Gran’s place in Chicago. Next, he wondered if she would be able to follow them to Paladin. After that, Becker hoped this man they were to meet would live up to Gran’s assurances that they would help him keep Sabine safe from her psychotic mother.

As he continued overthinking things, Becker kept glancing over at the naked man who walked beside him as if they were on a Sunday stroll and not heading towards Becker’s last hope. Naked man was unashamed of his body, which, Becker had to admit, was one hell of a good one. He stood a full head taller than Becker’s five feet eight inches, with broad shoulders, sculpted chest and belly, and lean, sleek, muscular limbs. Like a swimmer. Or a runner.

Becker could not help but stare at the impressively long and thick erection that bounced with every step the man took. The day was not that warm, but he did not seem to even feel the slight chill in the air. And the cool breeze coming down the road did not seem to affect his hard-on at all.

It has been quite a while since the last installment in the ‘Team Paladin’ series and I was very interested to see how Shane, his Marine buddies, and their respective mates (so far, at least), have been doing. The last I saw, Roane is out enjoying the woods during springtime, in his shifter form naturally, when his mountain lion smells ‘mate’. The man he smelled is stumbling down the side of the road toward Paladin with a backpack, dragging a suitcase, and a baby strapped to his chest, all the while mumbling to the little girl about grandma telling them to come here for help. Needless to say, I was more than intrigued, and waiting for Roane’s story. “Mate. Cub. Mine. Not wanting to scare his mate to death, Roane shifted from cougar to human and stepped out of the woods. “Looks like you need some help.” The traveler jumped and turned, dropping the handle of the suitcase he had been dragging. His eyes widened as he looked Roane up and down. “Holy shit, you’re naked.” Becker is running, with his niece Sabine, from his ex-sister-in-law, Danielle, who joined a cult and decided that sacrificing her baby would give them all kinds of voodoo powers. (There’s all kinds, huh?) Becker’s brother tried to stop Danielle and ended up dead, so Becker stole Sabine out of her crib and took off, trying to stay ahead of the psycho woman. Becker’s grandmother gave him Dallas’s card and said the bear shifter could keep them safe. Becker is fully aware of the paranormal who live amongst humans, as he is a healer and a white witch, so he’s fairly certain that the naked man is a shifter. Becker is stunned when all of the men of Paladin, and their mates, immediately accept him and Sabine as family, and vow to protect them both. He is equally shocked to discover he is Roane’s mate and the man will love and care for him forever. The best was watching these hardened warriors turn into giant saps over this tiny baby girl. Now, if they can make it through Danielle’s inevitable appearance, everyone should get a nice happy ever after. (Which, by the way, that showdown had some major inconsistencies, although I’m willing to overlook them in favor of the storyline.) Another wonderful addition to the series and, I do believe, the finale. Although I never know with authors… they can be sneaky *grins*. Regardless, the entire series has been enjoyable, quick, and easy reads, with entertaining storylines, hot sex, and hotter men. I can’t ask for more than that.

Keely has another winner in Cajun Thunder.