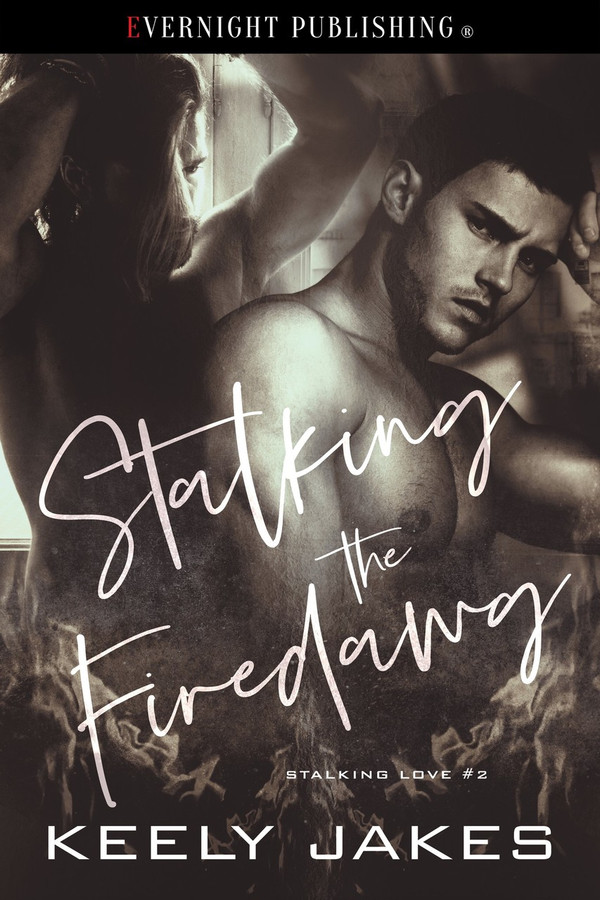 Stewart never expected to become a stalker when he called for help getting a cat out of a tree, but after meeting Sergeant “Hawk” Hawkins, he can’t help himself. The firedawg is everything Stewart wants in a man.

Hawk has always hated hospitals, and would do anything to get out of the one he ends up stuck in. With both a broken ankle and wrist, he can’t reach his third-floor dorm room in the barracks, and having just arrived on base, he has no one to ask for help…

Will Stewart do more than deliver food to the hospitalized Hawk? Will Hawk be able to help Stewart study for his paramedic classes? Will the men ever admit their feelings for each other, or will they remain roommates with benefits for the duration of Hawk’s recovery?

“Oh, Pie, look at all those beautiful men,” Stewart murmured, hoping they did not hear him. “If only one of them was gay, single, and looking for someone like me.”

He stood in the middle of a Marine Corps base, which meant strong, macho, alpha-type men, and women, everywhere he looked. It also meant Stewart worked hard to tone down his gayness as much as he could. His best friends, Hudson and Bingham, would laugh themselves silly if they knew that every time he approached the front gate Stew had to work to butch up. Otherwise, he would fawn and drool over every man in uniform he saw, and on this base that was a lot of drool-worthy hotness.

Patting his pocket with the hand not holding the can of herring, he sighed. As usual, he was out of business cards. He had left the last of them on the counter at Pie’s veterinarian’s office. He would have to go to the van and restock, just as soon as they got Pie down from the tree.

The huddle of well-built men in sand-colored camouflage uniforms broke up. Two men went to the back of the big truck and pulled a ladder down from its place. The other two headed his way. Stewart had to swallow twice as he checked out the taller of the two. Big and built, he had an exotic look of several races blended into one white-hot, sexy package. The café au lait skin and pale blue eyes mesmerized Stew.

The other one cleared his throat, pulling his attention away from the big guy. “Piewhackit’s up the tree again?”

Stewart nodded. “Yes. I took him for an appointment at the vet. After dropping him off here afterwards, I opened the door to leave. He slipped past me and was up the tree before I could blink.”

The two men nodded and looked up. Piewhackit looked down at them and meowed again, sounding pitiful.

“Where’s Mrs. Randall this morning?” The first one continued the questioning while the second man stood with his hands in his pockets, looking way too handsome for his own good.

Stewart swallowed hard, not sure how much information he should share. “Um, she’s out of town for the day. If at all possible, it would be really nice if she and General Randall did not find out about this.”

“And who are you?” tall, dark, and yummy asked. His voice was dark and delicious, sending a shiver through Stew that he hoped neither man saw.

“I’m with Runaround Stew’s errand service. Mrs. Randall is one of our clients.” Stewart said. He always spoke about the business as if it was more than just him running errands for people.

“Runaround Stew’s?” The man sounded amused and a little intrigued. But something about his tone rubbed Stewart the wrong way.

He always got touchy when someone mocked his job, or the company name, which he thought was memorable, not prissy. Running errands and making deliveries was a way to make money while he finished his classes to become a paramedic. Once he finished and became certified, he would close the business and get a job with an ambulance service.

“Cute name,” the big, sexy Marine said as one corner of his mouth shifted higher than the other.

He stared at the big man, entranced. It was a smile, sort of, which shot the man to top place in Stewart’s bedtime fantasies. Taking a deep breath, Stewart tried to relax. Some body parts cooperated. Others stiffened further from being this close to a military god of a man. If only the big guy was gay and showed a hint of interest. That would make Stewart’s day. Hell, it would make his entire year.

“Ladder’s ready, Hawk,” one of the other men called before Stewart could attempt to make a pass. Which was a good thing as he would just fumble it and probably get punched for his attempt. And he didn’t need any more bruises now that the ones Fred had left him had finally healed.

The man called Hawk nodded before giving Stewart a wink and a cocky grin. “This should just take a minute.” With that, the big, hot, sexy Marine turned and headed for the ladder.

Stalking the Kilt by Keely Jakes