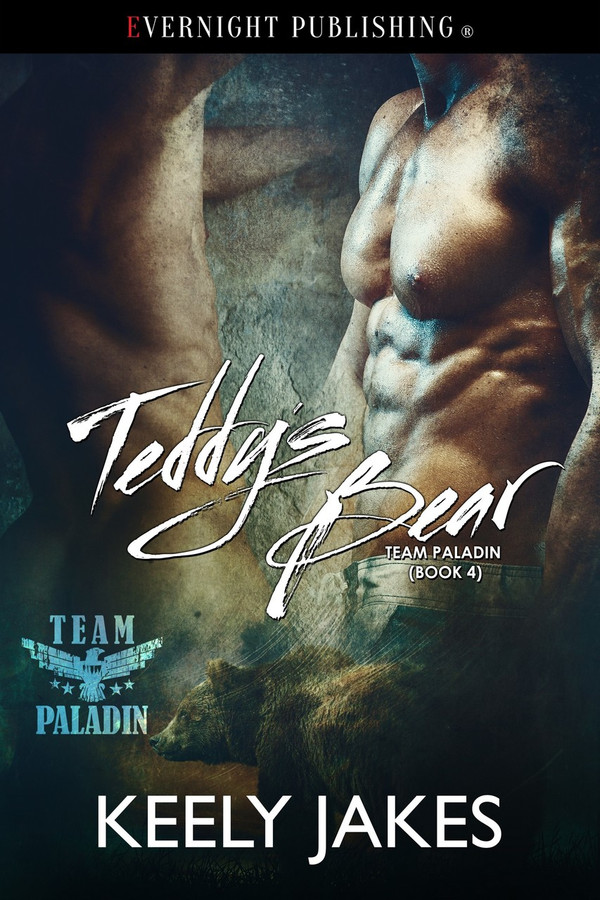 Teddy’s in shock after being kidnapped. Even more so when the shifter side that's been dormant his entire life comes to life. At least his attraction to Dallas now makes perfect sense.

Dallas knows immediately that Teddy is his mate, but he doesn't push himself on the other man. Being a soldier who barely finished high school, he doesn't think he’s much of a catch, but he's the only one who can teach Teddy how to deal with his shifter side. A side Teddy never knew he had. But Teddy's also determined to return to his life in Chicago.

Can Teddy get a handle on being a shifter? Will Dallas and his bear be able to live in Chicago? Will Teddy change his mind about returning to Paladin?

The last thing he remembered was running towards Twisted Jack’s bar and grill in response to screams of terror and gunshots. He had gotten as far as the front door, and then … nothing.

Nothing to explain how he came to be bouncing around the back seat of a honking big SUV.

Blinking away tears of pain as the rest of his body checked in with a sore shoulder and hip as if someone had kicked him and dragged him, Teddy took in the rest of his surroundings. One man was driving and muttering to himself about not being batshit crazy while the man who was sitting on the other side of the backseat was yelling at him to go faster.

Moving slowly, Teddy straightened to a more comfortable position, just in time to be thrown against the front seat when the car came to a sliding stop at the highway.

“Go right. Go right. Get us back to the airport before those animals come after us,” the man beside him screamed while waving a big-ass, shiny gun towards the right side of the car. Once the driver followed his instructions, the man turned in Teddy’s direction.

Meeting the man’s eyes squarely sent an Antarctic cold shiver down Teddy’s spine. The man’s eyes were dead, lifeless, and his expression so maniacal that Teddy immediately recognized him from Griffin’s description. In that second he also understood why his Griffin was so scared of this man.

This was the man known only to the world as Doctor Pain.

A former government interrogator who had kidnapped and beaten Teddy’s roommate and best friend. If one of the guards had not helped Griffin escape, the man would still have him tied up in his basement using him as a punching bag … or worse.

“You’re not my pet, but you’ll do. At least for now.” Doctor Pain looked Teddy up and down with a critical eye. “You’ll do well enough, and with your build, you’ll be able to take even more than he did before needing a break.”

Teddy’s fear at being trapped with this monster swirled with a growing white hot anger that this monster had not only hurt his friend, but had come into Paladin with his goons and attacked the team.

“And when I’m finished with you, I’ll go back and deal with those creatures back there. I will get my pet back. I wonder how much it would take to break one of them to my will. Hmmm, maybe I’ll have pet watch while I work on one of those animals.”

The man spoke as if Teddy, and the team, were just going to bow down and allow him to treat them as he had treated Griffin. That thought brought a red sheen to Teddy's vision as his anger deepened. He had never felt such a need to hurt someone before.

Though he was not a shifter like Roane or their father, Teddy knew there was more to him than the pudgy little twink everyone saw on the outside. Inside him there was an animal. A beast he had never told anyone, not even his family, about. Until now, that side of him had remained almost hiding in a cave in his soul, purring, happy, content to stay hidden from the world.

The terror, fear, and anger that swirled around and through him at this moment combined into an emotional firebomb. His other half, the mountain lion who had remained hidden for all of his twenty-four years, sudden stood up and roared. In the next seconds, the beast leapt out of its cave and pushed forward. Suddenly he was no longer Teddy, the man. He had become Teddy, the mountain lion.

After that, things got chaotic and hard to recount later.

Keely Jakes hits another good story with “Teddy&#039;s Bear”. I enjoyed the story line a lot with Teddy learning who he truly was and coming into his own and that Dallas was his mate. The love and attraction between Teddy and Dallas was well worth the read of this installment of Team Paladins finding their soulmates. I look forward to the next book with Roane&#039;s Story. I gladly recommend this for the good read it is.

Teddy has been kidnapped by the sadistic killer, Doctor Pain, and Dallas is determined to rescue him as quickly as possible. Dallas and Teddy’s half brother – Roane – are in hot pursuit, though Dallas is terrified they’ll be too late to save his mate. Teddy has quite a secret, one he’s kept all his life. The mountain lion hidden deep inside him – content for all these years to stay quiet and still – suddenly roars forward when Teddy’s life is in critical danger. And Teddy must face the consequences of his life altering forever. I was pleased – though a little surprised – that the plotline of Doctor Pain (carried over from the previous Team Paladin book, “Jack and the Ginger with a Twist”) was dealt with quite promptly at the very beginning of this story. I felt really divided over this. On the one hand I completely understood it being dealt with immediately, as it was a thread left hanging in the previous book. But on the other hand, having it finished so quickly and early left me feeling a little like it was skimmed over. I felt like such a large plotline as the whole Doctor Pain thing settled so easily and quickly felt a little unsatisfying. I was very pleased though that there was plenty of other new plot brought in. I thought watching Teddy learn about his mountain lion shifter – and learning pretty much from scratch how to control and use it – was extremely interesting. This clearly showed a lot of the world-building which I felt was somewhat lacking in previous books in the series, and it helped to give me as a reader a really clear idea of how this particular paranormal world worked. I also loved seeing Dallas and Teddy build on their relationship and find their groove on together. It was also refreshing to get out of Butte and the countryside for a little bit – when Teddy wanted to go home to Chicago and have Dallas help him get his life back in order. While I feel this book probably could be just picked up and read without the previous installments, I really do feel as it’s the fourth book in the series that a lot of other stuff has happened. Particularly the Doctor Pain thing might not make a lot of sense (and seem completely superfluous) without having read the previous book. That said, while I genuinely don’t think a reader picking this book up cold will find the same enjoyment out of it, it certainly can be read and understood fairly well. There is an epilogue that clearly leads into the next book – a fiendishly clever marketing plot, especially when it shows you exactly who the next book will be written about and setting up a hook to drag the readers in. I enjoyed this story and was pleased to see Teddy and Dallas get their happy ending. I’ll be eagerly waiting for the next book in this series.

I was eager to begin this fourth installment of the series because of unanswered questions I had regarding Teddy, Dallas, and Doctor Pain, from the end of the previous novella, but then reading the blurb for &#039;Teddy&#039;s Bear&#039; had me even more interested. Granted, the thought had crossed my mind that if Teddy&#039;s half brother, Roane, is a shifter, then why isn&#039;t Teddy, but the implied portion of half brother pretty much had me losing the thought. Lo and behold, I guess Teddy&#039;s shifter just hadn&#039;t kicked in yet. Teddy&#039;s shifter kicks in all right, in a rather awesome manner, and now I know what happened to the villain. Nom. Nom. Teddy&#039;s mountain lion recognizes that Dallas is his mate, but poor Teddy needs to get acclimated to being a shifter. It&#039;s all very scary and confusing. Not to mention that Teddy&#039;s cat isn&#039;t really cooperating with him very well. *grins* I thought it was very sweet that Dallas followed Teddy to Chicago even knowing he and his bear would be miserable, but wanting Teddy to make his own decisions and not feel forced. It helped that Teddy&#039;s mountain lion wasn&#039;t particularly happy in the city, either, so returning to Paladin where their family and friends are, made the most sense, and had both men (and beasts) happy. I&#039;ll be looking forward to Roane&#039;s story next, but until then, I&#039;ll just be content with this sweet and loving novella.

As with all the books in this series, Keely Jakes keeps you engulfed in the lives of Dallas and Teddy. When Teddy arrived in Paladin, Montana he had no idea his life would change. The trip was made to find protection for his best friend. What he ultimately found was the bear of his dreams in Dallas. Finding he himself was a shifter was par for the course. I&#039;ve enjoyed all of this series and await the next addition