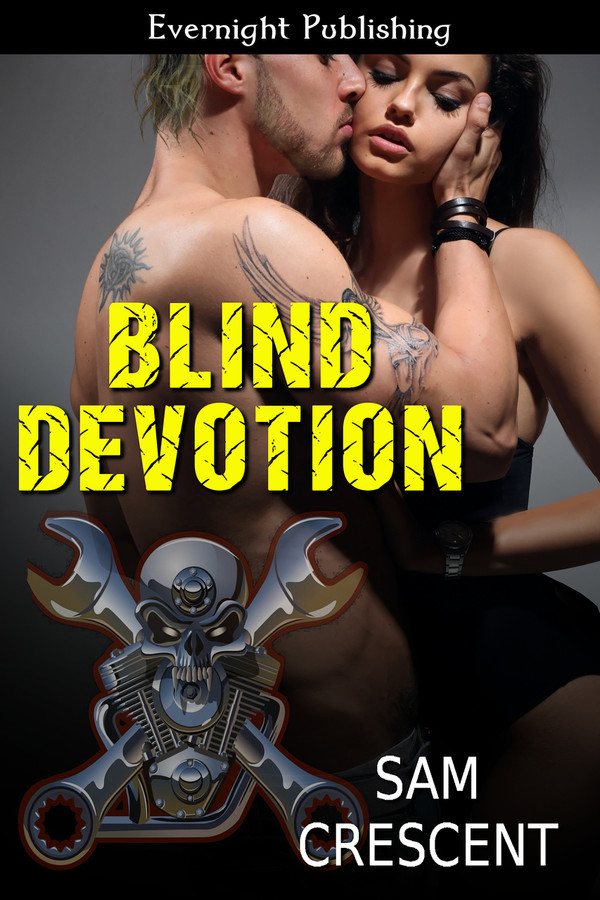 Ever since he learned of the death of his friend, Ashley, Pussy has been trying to do what was right for the club. Gonzalez, the new threat that The Skulls and Chaos Bleeds face, is worse than any of them anticipated. Gonzalez holds all the cards, and he’s driving the Chaos Bleeds crew down a spiral that can only end in death.

Blinded by her stepfather, Sasha has been living in a world of darkness for a long time, but one chance meeting with Pussy changes her life forever. The few moments she’s in his arms are the best of her life. He gives her independence and helps her to see her future more clearly.

However, Gonzalez is pushing the Chaos Bleeds crew to the breaking point. How long will it be before they all snap? In the midst of all this danger, Sasha, in her blindness and innocence, is a risk to the club’s future. How can Pussy choose between the love of his club and the love of his woman?

“Was she your wife or girlfriend?”

Shane laughed. “No, she wasn’t my girlfriend. She was a club whore. Don’t worry, pet. You don’t have a clue what’s going on. I just needed to talk to someone, and I don’t know why the fuck I thought to come to you.”

She heard him move, and she reached out, holding onto thin air. Growling in frustration she took a step forward and tripped. Sasha let out a little squeal just before he caught her. His arms banded around her body, holding her steady.

Her head pressed against his chest as he spoke. The vibrations were amazing to feel. His body had to be twice the size of hers. The moment he touched her, those large hands wrapped around her body, she felt safe. This was insane. She couldn’t be feeling this way about a man she didn’t even know.

“I’m sorry. I just didn’t want you to go.” She steadied herself.

Shane walked her back until the wall stopped her from going anywhere.

“Shane, what’s going on?” she asked. Heat bloomed inside her body. She wanted him to kiss her lips.

Shit, her fantasies were so fucking childish. She had nothing to compare them to.

“It’s my club name. I like to eat pussy and drown in pussy. It’s my name, and it’s time you recognized it.”

His breath fanned her face. Licking her lips, she wished she could stare into his eyes.

“You are so beautiful.”

Tension built inside her, and she jerked as his lips brushed across hers.

“It’s okay, baby. I won’t hurt you. Don’t listen to the shit people say. We don’t believe in hurting people.”

Pussy’s lips crashed over hers. She ran her hands up his chest to circle his neck as one hand gripped her ass tightly.

He pulled her close, and she felt the heat of his body through the thin dress she wore. The hard ridge of his cock pressed to her body. He was long and thick. She could make out the feel of him even through their clothing.

As suddenly as he was there, kissing her, he was gone.

“Shit, I shouldn’t have done that. Forget this ever happened.”

In the next moment he was gone, leaving her lips tingling all over.

Sasha was being controlled by her step-father. Pussy saw her and realized what was happening and got her away from him one day. This two had such a chemistry. This was a fast moving book and we get to see more of the war that is going on with both crews and Frederick. This was so interesting it was hard to put down.

The back story with the Chaos MC is awesome. As for Pussy and Sasha...it was a sweet story. I feel like they didn&#039;t have enough build up in the beginning and he was a little too vulgar at times. But they are a good match and he was sweet to her.

OMG!!!!! I don&#039;t know what to comment on first! The book, the plot, the connections, or the very ending which shows us what is going to happen in the really big book with both MCs. Sam Crescent has me on the edge of my seat!!! With so many lives intertwined, the action is fierce! This is a much read but I have a feeling that the main big book with Devil&#039;s and Tiny&#039;s MCs will blow us all away!

I freaking love Sam Crescent and her books. I love how the Chaos Bleeds series and the Skulls series intermix. Storyline was action packed, had angst and emotions. My heart went out to Sasha and all she endured by her stepfather. Loved the sweet side of bad boy Pussy and his treatment of Sasha. How he became her knight in shining armor. Book was written in a way you can feel the characters and plot. I was left speechless with the ending and OMG can&#039;t wait until the next book comes out. Would recommend!

This is the story of P. (aka Shane, member of Chaos Bleeds MC) and Sasha (blind resident of the town). Sasha&#039;s stepfather, Kenneth, is an abuser who actually caused Sasha&#039;s blindness 4 years ago. P. notices there&#039;s something special about Sasha and wants to get to know her better. Sasha discloses that her step-father is abusive and caused her blindness, and then it was on! P. went into protective-alpha-male mode of Sasha, which led to Devil and Chaos Bleeds getting involved. And you know how Devil and Chaos Bleeds feels about abuse to women. It was not going to be pretty. Let the chaos begin! I loved their story! P. was so tender, protective and caring of Sasha...it was so beautiful. He noticed everything about her and tried so hard to make things better for her, but also giving her independence. Beautiful love story between these two! I thought Sasha was the perfect woman for P. Here&#039;s what I learned: When you are blind, you have to put a huge amount of trust and faith in others. I never really thought about it until reading this book. Sasha gave P. a lot of trust in order to let him lead her. What a touching story!! Once again, the MC drama rocked my world! The MC&#039;s new and worst threat, Fredrick Gonzalez, is back in town. Finally, Devil and company start using their heads in order to figure out Fredrick&#039;s end game with the MCs (Chaos Bleeds and The Skulls). All I can say is, the Epilogue will have me stalking to see when the next Skulls book will come out! I love both of these series because of the close / constant connection.

Woohoo this book is awesome and the ending is bad ass ! I so can&#039;t wait to find out what happens next.

This storyline just keeps surprising me. I loved Pussy&#039;s story and that he wasn&#039;t afraid to protect his woman. I am looking forward to the next book in this interesting story!

WOW... From start to finish this book grabbed me and would not turn loose. I FREAKING LOVED THE ENDING, but dang what a cliffhanger. LOVE THIS AUTHOR AND HER SERIES OF MC BOOKS. That being said if you have not read both The Skulls and Chaos Bleeds, Why the HECK not? GO NOW and ONE CLICK yourself into MC HEAVEN.

What can I say but once again Sam Crescent has kept us on the edge of our seats. This is book four in the Chaos Bleeds series and what another great read it is. This is Pussy and Sasha&#039;s story. Pussy is a club member looking for revenge in the death of his friend Ashley and Sasha is a young girl who has gone through a lot of hardship in her life at the hands of her stepfather. When Pussy meets Sasha he is attractive to her before he even knew that she was blind and the attraction is amazing. This story is once again a rollercoaster of emotions and angst and makes you want to stay on until the very last page. If you are looking for a not only a book but a great MC series this is definitely one you don&#039;t want to miss because with each book the story just only gets better and better

☆Some Spoilers☆ So here I&#039;m again captivated by Sam&#039;s work. How she could do that over and over I have no clue. It&#039;s just shows how marvelous writter she is. Pu**y is witty, dirty talking and addictive hardcore biker. When he made up his mind to go after Sasha, no one could stand in his way. The way he was with her was so heartfelt and sweet and charming. It&#039;s really shows that you shouldn&#039;t assess book by it&#039;s cover. And Frederick f**king Gonzalez was on my s**t list from Butch book, and know...Well there isn&#039;t words enough to describe my loathe to him. I&#039;m actually afraid for the person who could introduce himself with this name to me. He really wouldn&#039;t be so happy to meet me. LOL. What made me a little happy in this story is that Devil finally fight back. I was like &quot;HELL YEAH!!! Kill them all!!!&quot;. It really made me want to sing hallelujah. So thirsty for Gonzalez blood to flow. Sad don&#039;t see this though. Yet. But at least someone&#039;s bleed (finally!) from enemy&#039;s camp. How Sam ended this book was so intense but also so heartbreaking. There for a couple of reasons, I wanted to kick Tiny&#039;s, Alex&#039; and others in the club&#039;s a**es. For they stupidity, for Tiny&#039;s and Devil&#039;s interaction with each other but most for they reaction for Butch. 《 Tiny, Devil, Alex stared down at the body refusing to help. 》 《 &quot;He&#039;s not getting my f**king help,&quot; Zero said, standing up. &quot;He&#039;s f**king dead to me.&quot; 》 They really deserve some whipping. No? Cheryl&#039;s answer to they indifference was unexpectedly awe-inspiring. Her ultimatum shows that for the person that you love, who is your the whole world, you would do anytning. Even if you need to threaten with their life people you started to become friend with. Sam really juiced me up for more and now I&#039;m so impatient to see what she will bring to us into her next story.