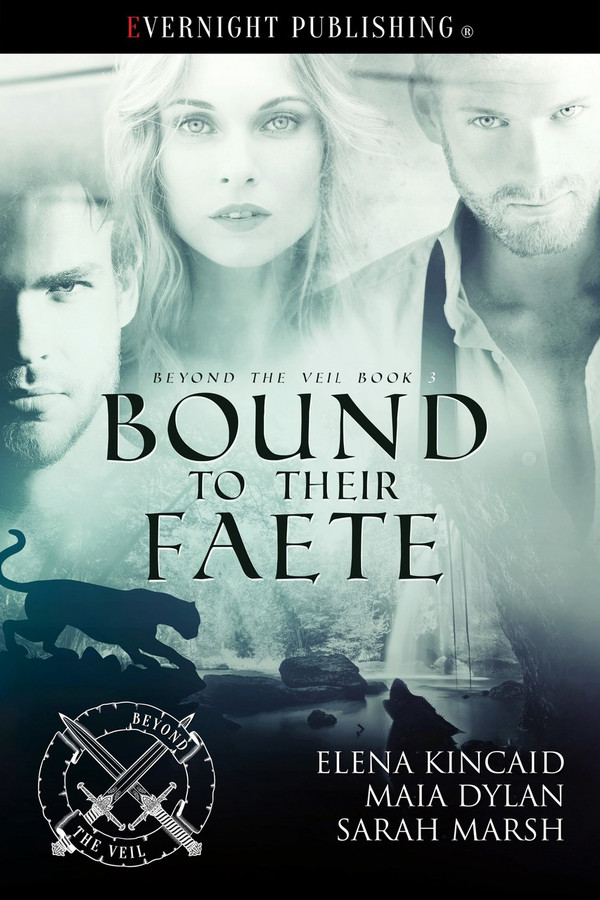 Corrine has spent a long time running. She finds sanctuary with a wolf pack after the Goddess sends her a vision that threatens to rob her of her mate. Her actions to save him come with grave consequences. When one mate turns into two, Corrine returns through the Veil seeking help to reverse what she’s done.

Wolf Alpha, Gabe Errikson has spent years pining for a woman who he thought wasn’t meant to be his. When he finds out Corrine has been keeping something from him since day one, he wonders if he will be able to forgive her.

Braxas Beaumont, a cougar Alpha, knew from the moment he laid eyes on Corrine that she was his mate. He also discovers quickly that his long-time friend, Gabe, is hopelessly in love with her as well.

Can two powerful Alphas come together to save the woman they are fated to from a darkness that is unlike anything they have ever known? Or will they be bound to their fate?

Before we go, there is something I have been meaning to do for quite a long time, Corrine.”

Braxas let go of her hand as well, and she looked from one to other with suspicion.

“I think you need to be reassured that you belong to Braxas and me. That we are both fully committed to you.”

“I believe you,” she threw in quickly. Braxas assumed that she did not need her seer abilities to know where this was heading.

Gabe however, continued as if she hadn’t spoken. He held up his right hand in a fist, his knuckles facing forward and popped his forefinger up. “You ran from us.” Next up came his middle finger. “You didn’t tell us where you were going.” His ring finger followed. “You lied.” Then his pinky. “You’re very haughty.” And finally his thumb. “You are way too stubborn for your own good.” He tilted his now open and raised palm to the right, poised to strike a particularly beautiful derriere.

“Anything else?” she responded in exactly the haughty manner that Gabe’s fourth finger had coincided with.

Gabe smiled slyly. “That’s reason enough for now.” He lowered his hand and placed it on his knee. “Hike up your dress and come lie across my knees.”

Corrine leaped to her feet. “So you can spank me like some wayward child? I think not.”

“No, so I can spank you like a lover spanks his woman when she aggravates the hell out of him.”

Corrine’s mouth opened on a silent O, and a blush swept over her face and neck. Braxas inhaled her sweet scent of arousal and felt the pressure of his cock straining against the zipper of his jeans. Gods, he wanted to be inside of her. “That shade of rose looks lovely on your cheeks.”

Corrine’s head whipped in his direction. “You’re just going to let him do this to me?”

Braxas chuckled. “Let him? Hell, I encourage him. I have no doubt that all three of us are going to enjoy it immensely.” He smiled widely at her. “Especially if that lovely rose color blooms across your ass as well.”

She opened her mouth as if she had something to say, but shut it just as quickly. She took one step towards Gabe and paused, looking from one to the other. Braxas knew she was excited by the prospect of being spanked by Gabe while he watched, but he also sensed her trepidation. In the end, fear won out, and their little doe, temporarily mesmerized by headlights, broke her own spell and bolted out the door.

Gabe stared at the empty doorway as he spoke. “Tell me something, Braxas. Do cougars like the chase as much as wolves do?”

Braxas smiled widely again, but more for himself since Gabe still stared straight ahead. “Indeed we do.”

It took only a few seconds before the pair of them, in unison, chased after her.

What would you do to save the life of the man you love? Corrine knew for many years that Gabe was her mate. As a seer, she also knew that his death would be the result of them being together. She took dramatic actions to protect him but those actions may doom them all. When it becomes clear there is a second mate as well, circumstances force her to acknowledge the truth. Will their love be enough to save them all or has fate cursed to be apart forever? Corrine is a Fae Seer. She was forced to flee the Fae realm years ago and has spent the time helping Gabe&#039;s wolf pack. She is a woman who keeps many secrets to protect those she loves. The situation has become very dire and she has to make some tough choices. Learning she has not one but two mates pushes her to make a painful acknowledgement and sends her on a dangerous journey. Gabe is the alpha of the wolf pack and has had strong feelings for Corrine for many years. Her acknowledgement that she has hid the fact they were mates is incredibly painful to him. The pain is compounded when she also admits that another alpha is also her mate. He is not the kind of man that likes to share even with someone that he respects. His pain causes him to lash out and perhaps jeopardize the chance to bond with his mate. Braxas is a cougar alpha and has worked besides Gabe to take on their mutual enemy. When he met Corrine, he knew immediately that she was his mate. He also knew that Gabe has feelings for her. Braxas is not one to rush to judgement. He wants to make it work but knows it will be hard for Gabe to accept the situation. Braxas is willing to take on any danger to keep his mate safe and have a chance at love. This is the third book in the Beyond the Veil romance series which features paranormal storylines. The books feature women finding they have not one but two mates. The men may share friendship, or in one case be brothers, but they are not lovers. I highly recommend you read all three in order to get the most enjoyment out of the series. Each book does build on the others and features a shared storyline and recurring characters. I really like that the series features strong women who are not afraid to take on a battle directly. There is lots of action in the story and plenty of opportunities for them to show their strength. They are not looking for a hero to save them but they find men who are truly devoted to their happiness. The women in the series have all had to face some tough choices and hard consequences but they stand tall. Corrine is the oldest female of the characters in the series and as a seer has had to really deal with a lot of painful situations and choices. She is willing to take full responsibility for her actions. You really respect her for enduring all that pain alone. The other aspect of the series that I enjoy is that the story is narrated by all three characters so you really get to connect with them all and understand their motivations and why they make the choices they do. In erotic romances, and especially menage stories, you often don&#039;t find the authors spending as much time on the character development as they do the sexual interactions. This authors of this series take time to let the reader get to know all the characters and really feel like there is a strong foundation to the relationship. In this book, it was really important to me to see how Gabe and Braxas could find a way to bond and accept that they shared a mate. The focus on character development doesn&#039;t mean you don&#039;t get plenty of heat. In fact, it is hotter when you have a had a chance to really fall for the characters along with the heroine. This third book in the Beyond the Veil series continues to deliver a great menage romance with plenty of action. It is best to read them all in order as they have a shared storyline and recurring characters. I really like that you get strong female characters in all the books that are willing to stand up and take on any danger to them or their mates. Corrine made a choice to protect her mate Gabe but it leads to a dangerous outcome that risks not only them but also her newly discovered second mate, Braxas. These men are both alphas and used to being in charge and learning to share a mate is quite an adjustment. The authors do a great job of developing the characters and each narrate part of the story so you really get a chance to know and understand them. I recommend this series to readers who enjoy a well-written menage romance and paranormal storylines. - See more at: http://erotic.theromancereviews.com/viewbooksreview.php?bookid=24099#sthash.QnXAORjM.dpuf

BOUND TO THEIR FAETE is the third book in the Beyond The Veil series, written by the triad of Elena Kincaid, Maia Dylan, and Sarah Marsh. Each of these authors by themselves are absolutely brilliant, and highly recommended by me. Put them together and you have a story that is equally packed with action - whether it is fighting or smexy times! In this book, we are once again with Corrine as she faces off her two mates. Corrine is a seer, and for years has been trying to protect Gabe from the knowledge. Once she meets with Braxas though, all bets are off, and her past actions come to taunt her future. There is a part in the middle of this, when Corrine says that she doesn&#039;t know who she&#039;s hurt more--Braxas, for denying him the time spent with her, or Gabe, for allowing him the time but denying his place as mate. I thought this was a very poignant part of the story, and perfect for Corinne. We reunite with old characters too, as well as the groundwork being laid for the next book in the series. I won&#039;t spoil anything, but I particularly loved the ending in the Fae village. I think my eyes may have leaked a bit with that, but I&#039;ll deny it to everyone! ;) Exceedingly well written, with no editing or grammatical errors to disrupt the reading flow, this is a book best read as part of the series, but guaranteed to grip you from start to finish. Definitely recommended by me. - See more at: http://erotic.theromancereviews.com/viewbooksreview.php?bookid=24099#sthash.Oj5P4vKB.dpuf

WOW! this was an amazing story and I am so excited there is more to come! I cannot wait to see what happens next. To be so afraid to become a mate that you make a spell, so afraid that your visions come true - that fear pushes you to make that spell. Three is a surprise in this story! Still makes me giggle when I think of it. Three is dynamic in this third book of the series. The interaction between the characters is intense, fun and loving. So much happens that they have to endure and overcome. They overcome and become stronger because of it, not only the three, but their pack/pard. I really loved this one. I just don&#039;t want to say too much about the characters in case it ruins the surprise for you. Really enjoyable and very quick read. The power of three is not something to be sneezed at. This triad of authors excel in their craft. Put them together and they have created the most amazing series.