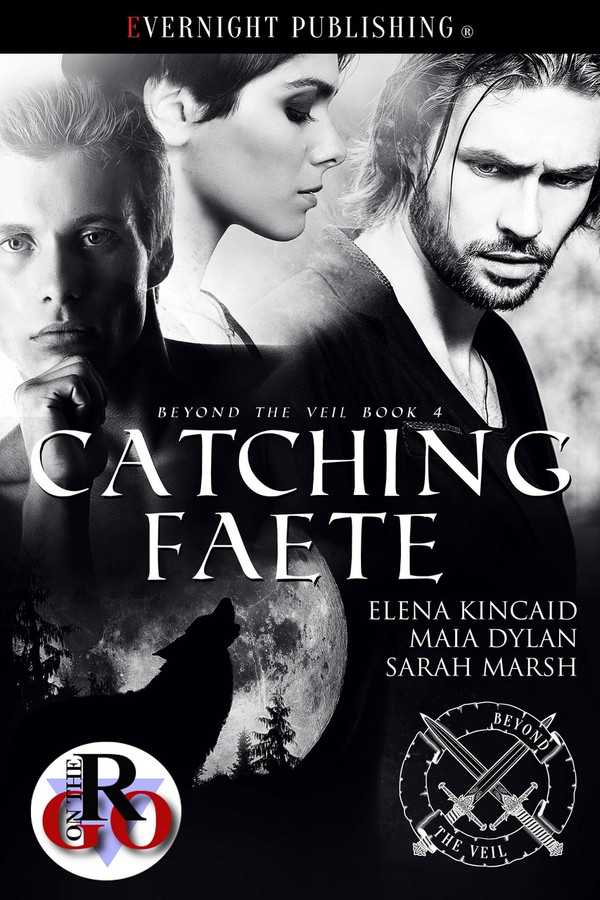 They say that when one door closes, another opens, but when Erica made her choice to stop a madman, she couldn’t have imagined the price that she would have to pay. The future she’d risked everything for has just changed forever.

The existence of the Dark Fae and their Goddess comes as a shock, but the fates have one more surprise in store for Erica and her mates in the form of orphaned twin babies who steal their hearts—but these children are not like the Fae Erica is familiar with. They come with powers that she and her husbands know nothing about. The Dark Fae council will watch over them to decide if they are capable of raising the twins, making Ben, Erica, and Leo feel the pressure of having their every move scrutinized.

When the twins’ dark powers begin to emerge, will one Fae Queen and two warrior shifters have what it takes to navigate the uncertain waters of parenting … and will the Dark Fae council agree to let them try?

Erica stopped in the doorway and turned to look back at her sleeping babies. The Goddesses truly did work in mysterious ways, she thought. She might not have had the pleasure of birthing the twins, but they were hers. She knew it with everything in her. They were hers!

“Come on, love,” Ben whispered in her ear as he urged her to lean back against him. “Leave them to dream of all the mischief and grief they will cause us over the next few decades. Now that they’re asleep, let’s make the most of this time we have alone.”

Heat swirled within her, and she nodded. They had been Mommy, Poppa, and Daddy all day. Now it was time for Mommy to get her some.

Leo had gone on ahead to the bedroom and lit all the candles they had, creating a golden glow that made Erica look radiant when she entered moments later with Ben. The smile on her face when she looked his way still made his heart skip a beat, just as it had the very first moment he’d seen her. He would swear that if he didn’t have a shifter’s strength, the sheer joy he’d felt since bringing the babies home and seeing Erica blossom as a mother would have made his heart explode.

He couldn’t have anticipated how two small little beings could instantly repair the gaping hole that had been ripped into their souls when the Goddess Allyria had told them the price they would pay for Alefric’s demise. But here they were, starting a new journey together, albeit, this one filled with much less danger, and much more need for an endless supply of wet wipes, but certainly just as important as anything Leo had ever done in his life previous. They would love and protect these children, and they would raise them to be the kind of people who made both sides of the Veil a better place.

“You look so resolved right now, Leo. What are you thinking about?” Erica stopped in front of him to gently caress his cheek with her hand.

“Just about how lucky we are … and how lucky you’re about to get.” He leaned in to kiss her as he landed a quick smack to her jean covered ass that made her yelp and laugh into his mouth.

“Now we’re talking,” Ben said. He quickly shucked off his own jeans and stepped up behind Erica to unbutton her top, revealing her soft, perfect breasts. He gently pulled back her wrists, using her top as a makeshift rope to bind them behind her. “How do you want it tonight, baby?”

Leo could tell from the quick increase in her breathing that she was in the mood for something a little edgier than “sweet” tonight.

“Mmm, I think I know exactly what our naughty little mate is looking for, don’t I, baby?” He cocked one eyebrow at her, and her eyes grew hooded as she bit down on her lower lip, indicating that she knew exactly the type of evening he had in mind. “Ben, get on the bed, sitting with your back against the headboard. You, my love, strip off those clothes for me, now.”

CATCHING FAETE is a short but sweet novella that gives more information about Erica, Leo, and Ben, and the twins that were given to them. Even though it was ordained by the Goddesses, there are still some on the council who think that the twins should be raised by Dark Fae. So Aneena comes to watch them for a fortnight, to then report back to Alak, Aeron, and the council about their suitability. Now for anyone who has ever looked after a baby, whether you were the parent or not, there is a scene is this book that literally had me laughing aloud as I have dealt with more than one baby who had &#039;exploded&#039;. I&#039;m thinking that there must be some personal experience that went into the writing of that scene. The whole novella though is beautifully written, with tender, poignant scenes, and scenes that will get your pulse racing and your temperature rising. Although short, you get all that you need in this book, whilst the authors still drop hints and teasers about what might be coming next. Extremely well written, with no editing or grammatical errors that disrupted my reading flow, I thoroughly enjoyed this little addition. Absolutely recommended by me. - See more at: http://erotic.theromancereviews.com/viewbooksreview.php?bookid=24957#sthash.1myIrQsH.dpuf

She made a decision to save lives. It had a very personal cost. The love of her mates keeps her going but there is an emptiness knowing she will never have biological children. When she is given another chance at motherhood, she will do anything to keep the children she has grown to love. Erica, Ben and Leo were brought together by fate and meant to be mates. She is a member of the Fae who was tasked with saving the Fae and other supernaturals from a tyrant. Ben and Leo are wolf shifters who have been determined to protect their mate from the first time they find her in jeopardy. They have formed a loving triad and been able to bring some peace to those who have suffered. Personally, they still have a loss. In her battle to save others, Erica&#039;s ability to have a child was taken from her. Fate later brings them Finn and Ellie, two young Fae who were orphaned. It completes their family. Everything seems to be leading to happiness until others question their ability to parent these young children with strong abilities. The series goes in a different direction with this book. It is not as action packed and full of battles against evil as the other books. It is a more intimate look at the characters from the first book in the series, Chasing Faete. In the third book, they were given custody of two young fae children. Now, that custody arrangement is threatened. They must prove that they can provide the right environment for these children they have grown to love as their own or risk having them taken away forever. I would highly recommend you read all the books in the series in order to get the most enjoyment. You should at a minimum read the first book which introduces you to the characters. I really don&#039;t think you will connect as deeply to the story if you don&#039;t have that previous exposure to the story. This is really a continuation of their story and is a real treat for those who wanted more time with the characters and to see how they would face the consequences of her choice. I am glad the authors chose to offer this book rather than moving on to another couple and only giving the reader a little interaction with the these earlier characters. So often, you don&#039;t get that follow-up and are left with a lot of questions. This book brings the focus of the series back to the first triad - Erica, Ben and Leo. They fought so hard to keep everyone safe and suffered a huge personal cost. Her taking a life meant she would never have children. In this fourth book in the series, we get a chance to visit with those characters as they face another battle. This time it is very personal. They have fallen in love with the two Fae children they were given to care for and now those arrangements are in jeopardy. It is an intimate look at their family and a real treat for those who have been reading the whole series and wanting to see how they faced their pain. It is not the book I would choose to introduce you to the series and I highly recommend the story only if you have already read at least the first book in the series. It is a great series for those who enjoy menage romances with paranormal characters. I really hope the authors continue to offer more books in the series and give us more time with the characters we have grown to really love. - See more at: http://erotic.theromancereviews.com/viewbooksreview.php?bookid=24957#sthash.sUwU0BY5.dpuf

You met Erica, Leo and Ben in Chasing Faete, the first book in the Beyond the Veil. If you have been keeping up with the series, (I need to post my reviews, bad, bad, Sandie) You’ll know that circumstances brought about by what she does, leaves Erica unable to bear children. They end up with a pair of dark fae children, and have taken them on as their own, a boy and a girl. But as we all know, nothing in life can ever be easy, can it? There is still a meeting to discuss the final disposition of the children, so they end up with a Duva Matra, a godmother, to stay with them for two weeks, to watch over them and to help make the decision on whether the triad get to keep the children. Of course, things never do go smoothly do they? The fantastic writing trio of Maia Dylan, Sarah Marsh, and Elena Kincaid have blended this into a seamless, wonderful story of parents who want to keep their children and worry about whether or not if they can truly care for them. Alone, these ladies are all incredible in their own right, but together? Simply a powerhouse!

This has been one of the best series I&#039;ve read in awhile and I&quot;ve been eagerly waiting for this one to come out. Leo, Ben and Erica are wonderful and watching Ben and Leo deal with twin babies they are raising is just hilarious!! THey are typical fathers and Erica is a wonderful mother to these two Dark Fae babies. Will they past the test to keep these children? This is an awesome addition to the series and I can&#039;t wait for more!

I have been lucky to follow Leo Ben and Erica from the beginning.... I have laughed cried and sat on the edge of my seat through their journey together... for me this book completes this for me to see them fight a different fight but for the same things in away fight for family .. to watch them grow , learn ,love and face fears to find the Ultimate happy ending.., This read had the heat between mates and all the ups and downs of raising a family again I loved this read that made me giggle and brought a smile to my face and heart ...