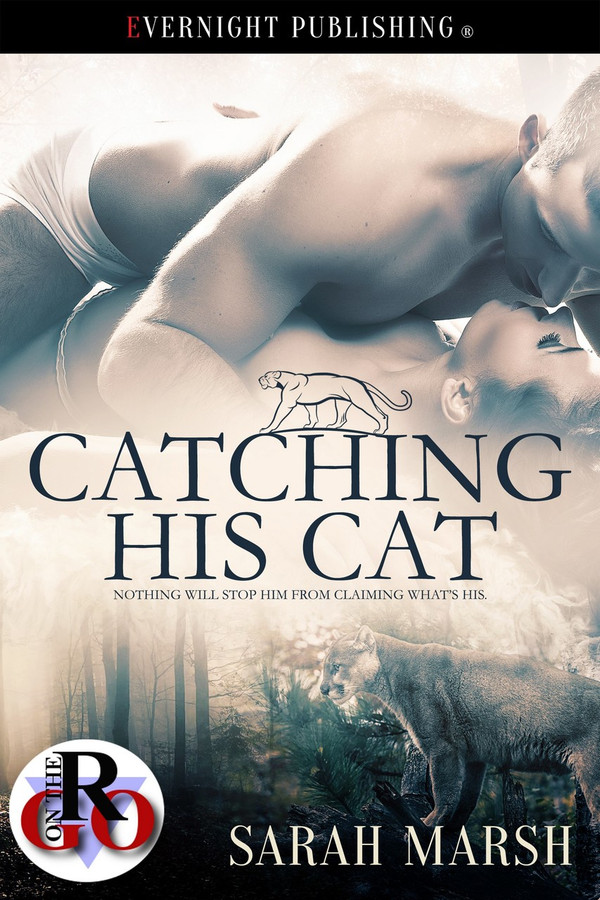 Sybella Gandry knows what it’s like to fight for something she wants. Her entire life has been a battle. But will one night of passion with a stranger threaten everything she’s worked so hard for?

She hoped her first meeting with the Alpha Council wouldn’t turn into a problem—but if it did, she was prepared to deal with it. The one thing she wasn’t anticipating was a wild night of passion with the male who was her fated mate the night before. She’d learned early on that having a mate with her position within the park just wasn’t possible.

Laird Connors is an Alpha’s Alpha and he’s very used to getting his way. So, true to his nature, when he meets his mate he wastes no time in showing her exactly who she belongs to—or so he thought. His little cat tries to run, but nothing will stop him from claiming what’s his.

“Fuck, you’re so wet,” he growled before rubbing the pad of one finger in circles around her aching clit.

Her hand was still stroking up and down his cock, and when his fingers dipped lower, finding her entrance, Bella groaned, biting down on his shoulder. Fuck, she needed his cock inside of her.

“Pants off,” she panted and released him.

In seconds, he had her jeans and panties stripped and his own thrown across the room as he knelt in front of her. The intensity in his eyes was enthralling as he growled again and then lunged at her. She wasn’t frightened, though. On the contrary, she knew she was about to get fucked and fucked good.

His arms scooped her up, and then they were both bouncing on the large king sized bed. Immediately he moved down her body, his hands pushing her legs wide open and up as he settled himself in between them. She didn’t even have a second to anticipate what he was about to do before his mouth descended upon her pussy, licking and nibbling over every single inch. Two thick fingers plunged into her core, thrusting in and out as he sucked her throbbing clit in between his lips. It was a full-on assault of sensations, and before she even knew it, her entire body was coiled in preparation to come, her hands tightening their grip in his hair as she pressed her hips harder into his mouth, and when he bit down on her clit she screamed as the orgasm echoed through her core. The waves of pleasure ebbed over and over again until his mouth finally released her.

“Holy fuck,” she whispered as her eyes closed and she struggled to catch her breath.

“Nah, we’re just getting to that part,” was his cheeky answer as she felt him kiss his way back up her torso until his weight settled in between her thighs.

Bella could feel the throbbing heat of his cock pressed against her pussy. She was so wet now that it easily slid through the swollen lower lips, causing small tremors to pulse through her womb in aftershocks. His arms were on each side of her waist, holding him above her, and she rested her hands at the top of his ass.

“Look at me, little cat.” His voice was still rough with his desire. “I want to see your golden eyes as I take you.”

She slowly opened her eyes, and her lips broke into a lazy smile, her hand coming up to rest against his cheek. She loved the thick stubble she felt there—it had felt even more amazing against the inside of her thighs. His deep green eyes seared her with their gaze, and it felt like he was looking right into her soul as he pulled his hips back and found her entrance. She sighed as he slid his thickness into her slowly as if he was savoring the feel of her around him. It seemed an oddly sentimental moment for such a sexually aggressive male, and not normally one she would appreciate from a bed partner—but something was different with this one.

Once he had pushed himself all the way inside of her, a low rumble had once again begun to come from deep inside his chest as he lifted her legs to slide his arms underneath them. Her breath caught as he pulled her closer, his balls nudging up against her ass, and then he began to move. He pulled all the way out of her snug heat, and then slammed back in, his gaze never leaving hers. Bella’s hands held onto his forearms, grasping at the only part of him she could reach as he began to thrust in and out of her, over and over again. She could feel her fangs dropping as her cougar snarled inside, encouraging the male to move faster, to fuck them harder. His own teeth were now visible as well, and sweat rolled down his face and chest as he worked her. His wide, thick cock didn’t miss a single nerve inside of her, and her body lit up with pleasure. Every stroke seemed to take her higher and the harder he took her, the more she needed.

“Harder, more…” she groaned out, her claws unsheathing from her fingertips to grab into the flesh of his arms.

Suddenly he growled and released her, slipping out of her sheath abruptly, but before she could complain, he had flipped her over onto her hands and knees. He pushed her legs apart and slid back inside, his hands now over her shoulders, using the leverage to pull her back onto his cock at a furious pace. Well, she’d asked for harder, and boy, did she get it.

The intensity of his fucking made her inner animal go crazy, wanting to claw at him, to mark this partner in her fury of lust. Over and over again, his shaft thrust inside of her, and she would have done anything to feel the release of his seed into her waiting center. When one of his talented hands finally moved back down, around her hip and pinched her swollen clit, her pussy spasmed around him, trying with everything it had to take him with her.

With a furious roar, he followed her into bliss, the hot jets of his seed coating her insides. At the same time, she felt his teeth bite deep into her shoulder, and her cat roared as well inside her head, telling her to sink her own teeth into this male—to bite him and mark him as theirs for the entire world to see.

Wait—what the hell did my inner cat just say? Mark him?

“Mine…” he moaned, his cock pushing deep inside of her once more. “You’re mine now, little cat. My mate.”

Bella is unique. She is a female alpha of a mixed pard. She has fought long and hard for her position and is in no hurry to take a mate. Laird is the Ruling Alpha of British Columbia, ruling over all of the shifters in a large area. He is strong and powerful, and determined to claim his mate. Laird is meeting with all of the Alphas of his region. The new Ruling Alpha never expected to find his mate at the meeting. Bella does not need the complication of a mate; her position as Alpha has been hard won and she is not willing to give up her position to a mate. This is a fast moving and engrossing story. Laird and Bella are strong characters who clash even though they are strongly attracted to each other. The author does a great job showing Bella’s struggle to lead and Laird’s determination to claim his mate. Their relationship and love story is well written.

Loved loved loved this one! An Alpha Female badass with a mate who allows her to be who she is. Me. Marsh knocked this one right out of the park! Fantastic writing, hot quick read, and we&#039;ll worth every penny!

Well this was an incredibly fast read. Loved Bella and her fierce strength and fight as the only female alpha. Laird is so yummy that he takes your breath away. So strong and open minded. He has absolutely no trouble accepting Bella as his equal and partner. Now to get her to understand he was willing and able to work with her - forever. Hot and steamy with a good dose of hardworking and smart characters.

Catching His Cat by uber-talented Sarah Marsh is a shifter romance in Evernight’s Romance on the Go line. It may be short, but it’s long on the heat factor! Not surprising with a Sarah marsh book. It’s a standalone shifter tale that will have you sharpening your claws in excitement! Bella walks into a bar…(insert joke here). She’s out for a night of letting loose and finds a hot guy. She goes up to his room with him and her cougar submits to his cougar. Bella is a strong woman who has fought hard for her place, and when her one-night stand bites her, claiming her as his, she knows she has to escape, so she hits him over the head with a lamp. (I guess he’s quite the knock out. ((see, I inserted the joke, even if it is bad.)) Bella gets the surprise of her life when she walks into a meeting and there’s her one-night stand. Things are about to get a whole lot different for both Bella and Laird. I loved Bella, she was a totally different type of shifter character than we are used to seeing in shifter books, and I can’t say too much without giving away plot bunnies, and I don’t want to do that. Laird is an alpha among alphas, but he’s still the type of guy who will support his woman, and you have to love a dude like that. This is one shifter book you don’t want to pass up! So, so good!

I just loved this read , not only was there an alpha male but there was an alpha female ! I don&#039;t get to read much books like that and this was just the perfect amount of authority . This book had me giggling laughing out loud smirking , omg The sarcasm and the rebellion attitude just made me laugh ... The chemistry between these two main characters were explosive that heat and the passion between them even though there is the little bit of rebellion it was just explosive ... you could feel the need and the worry and the heat between them ... and of course what would a shifter story be without a little bit of excitement the little twist at the end love it but you know me I won&#039;t give it away you got to read it to find out ! So with that being said I love this read I totally recommend this read For a steamy and giggling good time ...