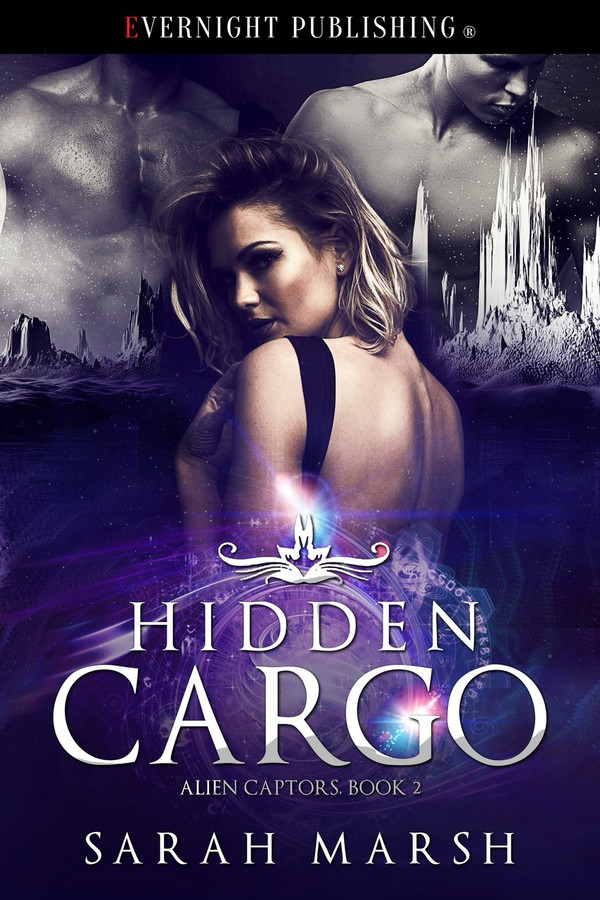 No good deed goes unpunished, or at least it doesn’t for Cassie Decker. Helping someone on the side of the road changed her life—and left her stranded on an alien planet. Lucky for her, two large, green rescuers offer her a second chance at a new life. Now all she has to do is find the courage to reach out and grab it.

Officers Deryc and Gage have a comfortable life on the island of Ilya. It may not be perfect, but they enjoy their work and they have each other. When fate reveals an unauthorized female has been hiding right under their noses, they know they must do their duty—but can they hand her over to an unknown future when she just might be the perfect female for their clan?

The Goddess works in mysterious ways, but will Cassie and her officers realize what they have found before someone tries to alter their paths forever?

Cassie washed up and changed into a nightgown as Dax settled comfortably at the foot of her bed. She turned out the light and walked over to open a window, letting the fresh air in. She’d always loved falling asleep to the sound of the ocean. Two deep voices entered on the breeze along with the sounds of the surf, causing a shiver to run up her spine, and she realized that Deryc and Gage must still be on the patio enjoying the evening. Cassie sat on the window ledge and waited for her eyes to adjust to the darkness outside. When they did, the sight before her was nothing short of decadent.

Both men were lounging on one of the large patio chairs. Deryc’s arm was around Gage’s shoulder, and his other hand cupped the other man’s cheek as he took his mouth in a slow and sensual kiss. Her breath caught in her throat as she watched Gage’s hand move leisurely up his partner’s thigh until he rubbed along the thick, hard ridge of Deryc’s arousal.

I shouldn’t be watching this, like some kind of pervert… I’m invading their privacy, but holy hell, I think this is the hottest thing I’ve ever seen.

Knowing it was wrong and willing her eyes to close were two very different things, and Cassie had to bite her lip as Deryc’s deep voice came to her on the night breeze.

“I believe you owe me a proper show of gratitude, my mate.” Deryc growled as Gage’s fingers freed the thick cock from the confines of his partner’s pants. “Or did you forget you promised me that this morning?”

“Hmm.” Gage lazily kissed along Deryc’s jaw, his hand now slowly stroking up and down his lover’s cock. “Did I say that? I can’t remember now…”

Deryc’s response was immediate, and it made Cassie gasp as he pulled away and moved to cover the other man until Gage’s wrists were held above his head in each of his strong hands, and Deryc was now straddling his mate’s hips. In the moonlight, Cassie could see his cock jutting straight from his body, the thick length an even darker shade of grey than the rest of him. He towered over Gage like an avenging god.

Deryc’s hands released Gage and began to undress, revealing his muscular body, the dark skin seeming to almost sparkle in the moonlight. Then he began the same process of removing Gage’s clothing, and the other man bit his lip, but left his arms where they were.

“Cassie could still be awake.” Gage’s words turned into a groan as Deryc’s hand now closed around his shaft, rubbing a glistening bead of moisture over the plump head. “What if she sees?”

“Mmm, think about that, my love.” Deryc’s hand moved faster on his lover’s flesh. “Just imagine those stunning blue eyes, her gaze roving over your hard and aching flesh like a caress. Perhaps she would like to join us even? I see now why you were so enamored with her when you first spotted her. She is quite remarkable.”

Gage only moaned louder at Deryc’s words, his hips pushing harder into the other man’s grip, causing a warm chuckle to escape his mate’s lips. “I see how much you like that idea, love. I can feel your cock buck in my grip as if it were trying to get inside of her even now.”

Holy fuck! Were they fantasizing about her? This time Cassie couldn’t stifle the groan as her pussy flooded at the idea of being out there on that couch with them, and it was so loud she startled herself, jumping back from the window in case her hosts heard it as well.

She needed that shock back to reality. “Jesus, Cassie, what is wrong with you?”

She didn’t want to think she was the kind of person who couldn’t control her own urges, but the fact that she hadn’t been able to help herself from watching Gage and Deryc’s intimate display meant they had much more power over her than she’d thought. Good grief, all she could hope for at this point is that they hadn’t heard her at all.

Cassie is just trying to do a good thing and it bites her in the butt. She’s kidnapped by aliens and is now stuck on an alien planet. Officers Deryc and Gage find the unauthorized human but feel a connection to her. They want her for themselves… Poor Cassie. She did a good thing and woke in a suitcase with a bunch of puppies on an alien planet. That sounds like my kind of luck. She’s in hiding when she meets Deryc and Gage. These sexy aliens have her all sorts of excited and the feelings are mutual. Add in some seriously hot sex and this book is a must read! Great characters, action, scifi, and that ending set up for the next book. ​ If you like scifi erotica, I highly recommend Hidden Cargo.

Another awesome story from Sarah Marsh. Everything clicked in this book for me. The characters, the storyline, everything. Cassie is a woman who can definitely take care of herself but when she finds herself with two aliens, feelings and emotions get in the way. Can Deryc and Gage keep her safe? And what happens when she is found to be an illegal? I highly recommend this book!!! It&#039;s really good.

Cassie, man she was strong, been through so much in her life and then she gets abducted by nasty rotten aliens!!! I woulda freaked out and had a total meltdown, doubt I could have made a home on another planet, but it sure sounds like a good idea some days!! I think Dax was a big part of it all, he was a great addition to the story but then she meets Deryc and Gage, Officers of the Law who never expected to meet such an enchanting illegal alien!! Loved watching this all play out, was on edge waiting to see what happened to Cassie!! This story was just right, emotion ranging from humor to sexy to some OMG moments.