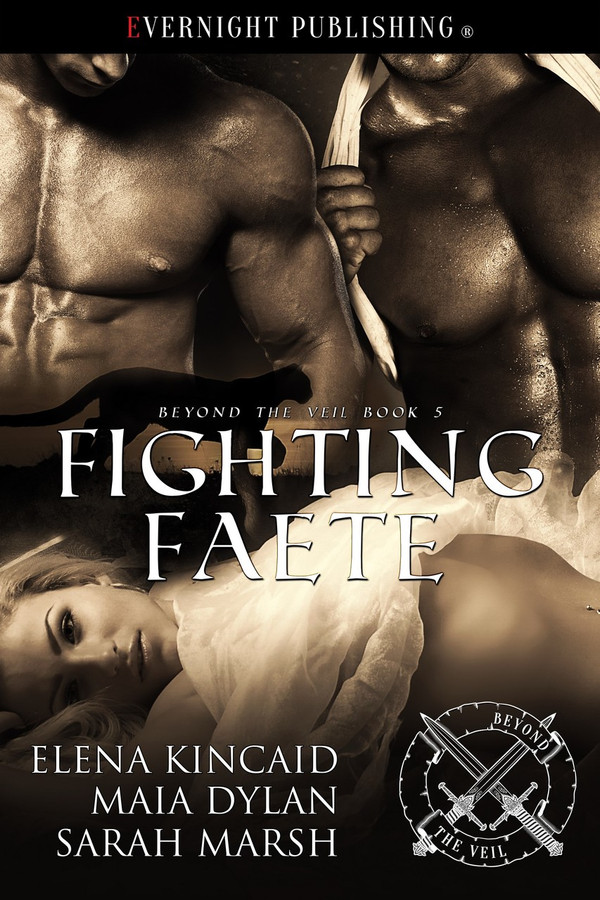 Darkness is coming to both sides of the Veil…

Katrina was born to fight. She earned her position as Beta through blood and battle and she’ll do anything to protect those she cares for, but being a hardened warrior comes with sacrifices. The aftermath of her kidnapping has her fighting harder than before, even with herself.

Aeron and Alak have always known their service to the Goddess Rysanna came with a heavy responsibility, one they easily accepted. Years later, with a battle for the ages looming, a beautiful golden cougar brings all of their seemingly forgotten instincts to the surface. Will their fiery mate fight their fate, or will she embrace the gift bestowed upon them?

As the trio struggle to find their path, dark emerging forces would see both the human and Fae realms fall into despair. Finding love can sometimes be the simple part … but for some, accepting it isn’t always easy.

With one pass of Aeron’s magic over her clothing, the seams melted away, and he gently dropped the scraps to the ground, leaving Alak’s arms full of warm, golden, naked skin. Alak placed a kiss along her shoulder, up to her neck, while Aeron did the same on the other side. Their mate’s arousal was all that was important right now, and Alak could think of nothing else but ensuring her pleasure.

“Just so you both know … our argument isn’t over,” she said, her words coming out in short pants in between kisses Aeron and Alak were delivering.

“I’d expect nothing less from our delectable dragon,” Alak teased back.

“Are you mocking me?”

Alak saw the tiny smirk at the corner of her mouth, and he pulled her chin towards his own lips before looking straight into her golden eyes. “Never,” he said, and then he kissed her with everything he had building up inside of him. His passion, his frustration, his longing, and finally, with all the loneliness he and his brother had endured over their long lifetime. To be High Dorum was the greatest honor the Goddess could bestow upon her children, but it set them apart from the rest of their people. They’d almost lost hope for a mate of their own, for how would one female hold the strength to equal theirs? But the Goddess sees all her children, and she must have known that this remarkable woman was just out there, waiting for Aeron and Alak to follow the path that led to her. Now it was up to them not to screw it up.

“Do you want us, Katrina?” Alak finally pulled back from her lips and whispered his question, as if afraid in this moment that she would deny them all what they so desperately needed.

“I do,” she replied without a single hint of hesitation in her voice.

Alak carried her to the master bedroom in their suite with Aeron following closely behind. When they reached the king-sized bed, Katrina lowered herself down the length of him and then positioned herself on her back in the center of the bed. A golden goddess, holding him in place as he gazed upon her in fascination. She stretched out her arms and beckoned them to join her. Finally, he snapped out of his daze, and he and Aeron continued undressing. He loved the little hitch in her breath as they revealed themselves to her, her gaze roaming over their bodies, seemingly greedy to take them in. Alak ached for her. He grabbed his length and slowly stroked, and the sight of her little pink tongue darting out to wet her perfect lips made him groan out her name.

“Yes, do you want to see?” she purred, legs falling gracefully to each side.

“You make my mouth water seeing you ready for us,” Aeron said, his voice strained with desire. “I’ve thought of this moment many times since we met.”

Alak knew all too well what his brother was feeling in this moment—the same kernel of hope was beginning to burn bright in his own heart, that this glorious woman would make their lives complete. He followed Aeron onto the bed and stretched out beside Katrina while Aeron knelt by her feet, his hand slowly stroking along her calf.

Oh boy!! These three authors sure know how to write a good story. I loved this one with a strong female lead and her two mates who will do anything to love and protect her. All sorts of things happen and they really have to work for their love. I think Katrina , Aeron and Alak are my favorites out of this series!! Loved it!

This is one heck of an action packed read. Katrina is a fighting shifter cougar, beta to a pard and one of the few female to hold this position mind you. She is dedicated to her Alpha and pard. She is always looking for a fight, and figures she&#039;ll never find her mate. Aeron and Alak are twins from the Fae world, on the dark side. They protect their Goddess with all they possess and have long given up finding a mate. Yup they are in it together - even love. Sparks fly when Aeron &amp; Alak try to protect Katrina - who do they think they are!! Fun rollercoaster ride with these three...authors and characters.

lucky me I have been here since day one! And I have to say this is a first for me where all the characters were strong independent dominant... so you have Kat a cougar shifter who is beta to her new bigger pack she is not week In Anyway she is strong quick and no hold bars.. you cross her and will be walking away missing parts well if your lucky to walk away, but Kat is also destined to be mate to two twin dark fay warriors Aeron and Alak who are also very dominant and take no prisoners kind of guys... they know Kat is meant to be there’s and will make sure she see it .their mighty dragon lol you will get that when you read the story... this story was built around them because I cannot picture any other characters that you get to know go and do what they have to do these are the only characters I can see that can fight this fight this time around... they are strong and they never give up and when those three are together nothing can stop them... things blow up in and out of bed *wink* the passion between them between the sheets.... and the power between them in war are nothing to laugh at but to be in awww... but with that being said they did make me chuckle here and there and giggle just being them and loved Kat’s sarcasm!