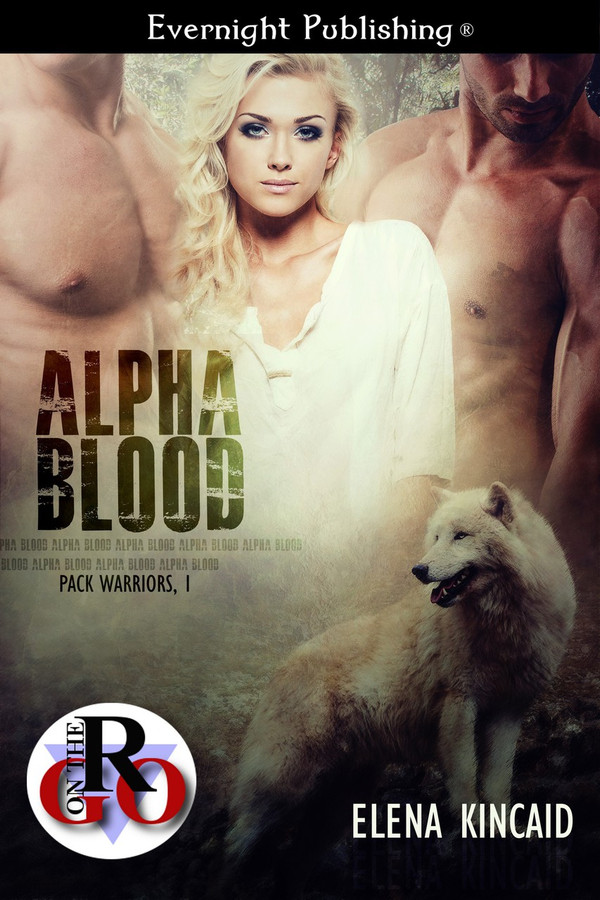 Gemma, a she-wolf, alone and in unbearable pain, cries vengeance against the evil man who caused her suffering.  Jordan, alpha of the White-Moon pack, the largest in the country, has a war to prepare for.  Kane, his brother and beta, struggles to be worthy of the role thrust upon him.

When young girls start to disappear and rumors of a dangerous serum surface, the two men are brought face to face with their destiny.  A fiery passion blooms between Gemma and her men, one that heals her body and soul, but a dangerous war still lies ahead.  Will they be successful at stopping an evil tyrant before another girl goes missing or will Gemma pay the ultimate price?  With her life.

“You know, I am perfectly capable of drying myself off,” she said with a smirk.

“Now what would be the fun in that?” Kane stood behind her in front of the bathroom mirror, the fog on the glass already dissipating. They both zeroed in on the twin crescent moon marks on either side of her neck.

“I’ve seen marks on women before,” she began, her voice reverent, “but I never imagined mine would look so beautiful.”

“You’re beautiful, my little wolf. Every single part of you, especially your soul. I can feel it connected to mine.”

She turned to face him. “I feel it, too. Yours and Jordan’s. And I feel a tingling in my neck. It’s incredible.”

Kane felt the tingling elsewhere. He needed her again. He pulled her close to his body and fused their lips together. Breakfast could wait a little while longer.

Kane walked Gemma backward into the bedroom, kissing her lips and neck along the way. When they reached the bed, he gently lifted her onto it and took his time making love to her again while pots clanged downstairs and the delicious scents of bacon and eggs wafted up the stairs and into their bedroom.

They fought hard to be together. After many battles, they deserve a treat. Gemma intends to make the most of her special time with her two mates. This book is a special treat for those who enjoyed Alpha Blood (Pack Warriors #1) and want to spend some more time with the characters. The first book introduced the reader to Gemma, Jordan and Kane. Gemma is a wolf shifter that was on the run after her family was killed. When she encountered wolf shifter brothers Jordan and Kane, they knew she was their mate and they vowed to protect her from the man who would not give her up. ALPHA BLOOD TREAT takes place a couple of years later and is a short story showing them enjoying their life with their twin boys. The chemistry is still very much there for these mates. When they get alone time, they make it count. They have to work hard at fighting challenges to the pack, mediating pack issues, training the women to protect themselves, and running a business, too. It does not leave them much alone time when you also factor in raising two young children. You definitely get some great scenes showing that the heat is still as high as it was when they first met. They have really found a rhythm to their sexual encounters and the men get almost as much enjoyment from watching their mate with each other as participating directly in the encounters. I love that Gemma enjoys taunting her men and keeping them waiting for more fun adventures. They enjoy the torture, too. I really enjoyed the first book and my only complaint was that it was too short and I wanted more time with the characters. I wanted a chance to see them together after all the battles they faced. I was excited when this second book in the series was offered. I was hoping I would get to spend a lot more time with the characters. The opening had me smiling and I was immediately immersed back in the characters. I just didn&#039;t want it to end so quickly. It is kind of like a bite-sized dessert. It is sweet and enjoyable but leaves you wanting a little more when you are done. I can only hope the author will offer a larger portion in the future. In some books, the characters just really make an impression from the very beginning. Gemma is a character that faced many hardships before finding her mates. Her meeting Jordan and Kane was the best thing that could happen to her. It brought them great joy even as they had to fight to be together. The first book ended too soon for me and left me wanting more time with these characters. The announcement of a second book made me very happy but it is only a brief interlude with the mates. You can enjoy the sweetness of their special time together in this companion to the story. I hope the author will deliver a longer treat for the readers who have grown to love the characters. - See more at: http://erotic.theromancereviews.com/viewbooksreview.php?bookid=21413#sthash.FXr0Odav.dpuf

Wow… I felt like I was dropped in the middle of a war and it took me a couple pages to sort everything out; the book had action and a very hot menage romance. Gemma is stuck in an impossible situation with a mad man who is fixated on her and will stop at nothing to have her. Jordan and Kane have had their own struggles but they have to deal with the issues facing the woman of their pack. When they meet Gemma they know they have to end the upcoming war and make sure they survive it. I enjoyed this book but wished it could have been longer to give me better character development. I give this book 3 diamonds and hope this can be expanded into a longer series.

This was a great fast-paced love story with lots of heat and great action! I&#039;m definitely looking forward to more from this author.

Gemma is a wolf shifter who refuses to buckle into the demands of a tyrant Alpha. This cost her dearly. In physical pain, she’s in hiding from Pollux, the alpha who cause it all. While in hiding she’s found by Alpha Jordon and his brother Kane. Gemma is their mate. And the fun begins. Hot, sexy, exciting little romp of a story with great characters. The author did a great job writing full, well rounded characters in so few pages. I loved the contrast between Jordon and Kane and the way they each were with Gemma. Gemma was such a strong character, but yet had some vulnerability. This was such a great read. Although short, it’s a complete well written story. My only negative was some confusion with all of the different Moon pack names and who belonged to which.

I was gifted a copy of this book in exchange for my honest opinion and a review. Gemma is a wolf, she is in some serious trouble she is all alone and in the most unbearable pain ever, she cries for vengeance against the evil horrid man who has caused her this suffering. Jordan, is the alpha of the White-Moon pack, he leads the largest pack in the country, and they are preparing for war. Kane, is the his brother as well as being the beta, he is finding it hard to be worthy of this role that has been pushed on him. When young girls from all different packs start to disappear in to thin air rumours start to circulate of an extremely dangerous serum it come right to the surface for everyone, just as they think everything is crystal clear these two strong men are brought face to face with their ultimate destiny there love. Quickly a smouldering hot passion blooms between them all, it helps Gemma heal her self inside and out, but this dangerous war is still looming upon them. Will they be victorious at stopping this evil tyrant before yet another of there girls goes missing, or will Gemma end up paying the ultimate price? With her own life. Will these three succeed or will there new found love flounder before them? What a brilliant short story Elena Kincaid is an extremely talented author she brings us a Fast paced, thrilling sexy hot read! The characters are superbly written you get to no them very well for such a short read. The thrills the spills and the sexy times were extremely intense and Smouldering HOT! Favourite parts. “I’ve seen marks on women before,” she began, her voice reverent, “but I never imagined mine would look so beautiful.” “You’re beautiful, my little wolf. Every single part of you, especially your soul. I can feel it connected to mine.” see how amazing Elena is. Gemma was a great character very strong very intense and o so worthy of both of her mates I seriously wanted to lean through the book and hug the heck out of her. She has such great gumption and sass which make her characters even more realistic. Jordan is a tough man he is full of life and a very strong lead character and is a great leader, of course he he is protective and wickedly handsome... yes he and Kane make you drool just a little … who am I kidding a lot and where Jordan is the hard one Kane is softer has bit more charm and an appeal you cannot fault, but these two are like yin and yang, They make it work brilliantly. Watch out for some of those intense thrilling moment I cant give anything away but it will for sure have your heart pumping, and leave you wanting more. All I need now is two of these sexy shifters for my own …. pretty please Elena. 4 Out Of 5 Hearts From Cariad Books

Loved, loved this book. It was short , sexy and hot!!!

Oh my goodness!! I absolutely love this book! It starts out super intense and ends on a very sweet note. Gemma is in a horrible position but her strength was amazing! All she needed was a little help from her sexy alpha males (mmmm that&#039;s TWO sexy alpha males), and she could battle anything. The yummy scenes between her and her men, Kane and Jordan, were smoking hot! A lot of authors have a hard time writing love scenes with three people, but Elena did a FANTASTIC job! Totally worth it!

One of the BEST sort stories I have ever read. Fast paced, engaging and sexy read! The characters were extremely well fleshed out for such a short read. The drama was intense and the sex was SUPER HOT! Great job Elena!