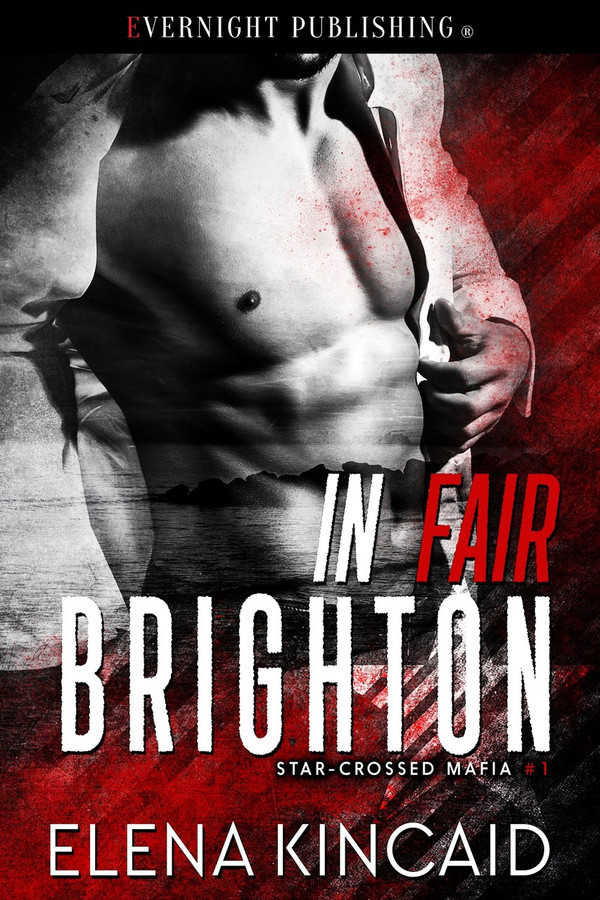 Sasha Palmer, a travel writer, never stays in one place long enough to find even the possibility of love. The baggage of her family keeps her closed off from everyone, but one day, love finds her in the form of strong arms, wrapping around her, and pulling her to safety from oncoming traffic. One look at Rome, and she’s a goner.

Roman “Rome” Valentin is a killer … and a good one at that. He leads a life he detests, full of self-loathing, until the day he meets Sasha. He saves her life, and she steals the heart he didn’t know he still had—but then she vanishes.

Sasha dare not stay with Rome, for their two families have been at war for decades. But will a chance meeting and a passionate, growing love end the bitter feud or spark a battle that destroys them all?

Sasha found herself pressed against the façade of a bright yellow apartment building. The street they had been walking down was nearly deserted, when the two of them suddenly exchanged heated glances. He pushed her up against the building and kissed her fiercely, one of his hands cradling the back of her head, while the other was right below her ass as she hitched her leg around him. She threaded her hand into his hair and fisted the front of his shirt again with her other hand, moaning into his mouth as the kiss consumed them both, letting out two days’ worth of fire and heat. She felt his hard length pressing into her, wanting to take him inside her body and lose herself in him.

He slowed their kiss down. “Do you want me to take you back to your hotel now?” he whispered against her lips.

“No,” she whispered back. She nipped his bottom lip, driving him to kiss her fervently again.

He pulled back to look at her, his face riddled with desire. “I ache so badly for you, Sasha.”

His hotel was closer to their location, only two blocks away. They walked briskly without a word until they were inside his room.

“God, what you do to me,” he said, his voice gravelly, right before he cupped her face and delivered another impassioned kiss.

He removed his hands from her face, and lowered them to cup her ass, pulling her closer to him. Sasha moaned into his mouth as he hoisted her up to straddle his waist. He then carried her to the side of the bed in the center of the room and laid her down on her back so that her bottom was at the edge and her legs dangled off the side.

He gave her a hungry look, pushed her legs up closer to her before spreading them wide. “Leave them like that,” he ordered.

She made a low “uh” sound in response, never having been so turned on in her entire life. He pushed her sundress up to the middle of her stomach and licked his lips as he stared at her panty-clad swollen flesh. She let out a moan in response.

Using only one finger, he slowly traced the center of her cleft. His breathing was harsh. “I can feel how wet you are for me even through here.” And just as achingly slow, he hooked a finger on each side of her underwear by her hip and pulled them off her, and then spread her legs back open to their previous position.

She felt so vulnerable, yet so turned on with the way he was hungrily staring at her most intimate part. He dipped his head, and immediately followed the path his finger had done, only this time with his tongue. Sasha moaned loudly at the contact.

“Even your pussy tastes sweet,” he said against her flesh.

Rome tortured her at first, licking all around her outer and inner lips, avoiding that tight little bundle of nerves she wanted to beg him to taste until finally, she did beg. “Please, Rome, please.”

His soft chuckle against her only made her feel needier until he took pity on her and gave her what she wanted. He sucked her clit into his mouth, making her whimper, and then he ate her as if she were his most delicious dessert, lips, tongue, teeth, driving her to the edge quickly.

She screamed, her orgasm hitting her so fiercely, it blurred her vision for a moment. His mouth did not release her until her body calmed.

“You’re so beautiful when you come,” he said, his voice gravelly.

She gave him a lazy smile when he stood up to remove his shirt. She sat up then, to undo the button on his jeans while he watched her with his eyes hooded. She bit her bottom lip as she lowered his zipper, returning the favor by tormenting him with her slowness. Then, instead of touching him where he wanted, she traced the hard lines of his six-pack abs, up to his muscular chest, and then she brought them lower again all the way down to his perfect V. Rome’s body was a work of art. Michelangelo’s David came to mind.

Deciding she couldn’t wait any longer to taste him, she freed his hard cock, thick, long, and cut. He was beautiful. He shucked his pants all the way down, and as soon as he stepped out of them and came closer to her, she sucked him into her mouth, taking him as far as she could go.

His moans of enjoyment only urged her on, knowing she was driving him as crazy as he had her. She licked up and down his shaft a few times before popping him back in, and concentrating on the head.

“Enough,” he said gruffly, popping himself out of her mouth. “I want to come inside you.”

&quot;Two households, both alike in dignity, In fair Verona, where we lay our scene, From ancient grudge break to new mutiny, Where civil blood makes civil hands unclean.&quot; Well, thankfully, in this story, we do get our happily ever after, but on our way there, so much sexy, romantic fun. When Sasha meets Rome, he&#039;s her knight in shining armor, as he saves her from potential injury. They hit it off instantly because who isn&#039;t attracted to a soaking wet person in the middle of Verona; and from there, begins a whirlwind romance that lasts until Sasha gets a peek at the contents of his wallet and realizes who he is and then promptly disappears. One might think that was the end of it but Elena Kincaid does a marvelous job of reintroducing us to the winsome couple who meet again under inauspicious circumstances and are now faced with what to do about their respective families for they have been at war for…reasons that come out in the story. Overall, this is an easy read. If you love mob romances, this one hits all the right buttons, progresses smoothly, and doesn&#039;t end with anyone taking poison. If you&#039;re looking for an entertaining way to spend the afternoon or evening, then look no further than IN FAIR BRIGHTON.

Elena Kinkaid has come out with a wonderful book in her series Star-Crossed Mafia. Reminiscent of the Bard’s Romeo and Juliet, we have star-crossed lovers from opposing families, only here we have the mob. Sasha Palmer is rescued by a tall, dark and handsome man from the pouring rain. They connect and spend the night together. While she cares for him, she finds out that Rome is really Roman Valentin, a killer for her families rival, and she thinks that he’s in Verona to kill her, because she’s really not Sasha Palmer. Her father is in the Russian mob. So she runs. Rome cares deeply for Sasha, it’s time to put aside the rivalry of the past, so in fair Brighton, they meet again. A sweet and sexy love story! This is the start of something magnificent.

The connection was instant, their love eternal but what would they be willing to sacrifice to be together? Two families torn apart, can they call a truce and let go of the past for their children. In Fair Brighton is a well written tale of mafia war, family and an undying love that will change everything. I enjoyed this story and recommend you grab your copy!

Sasha is enjoying a bit a freedom when Rome saves her life....literally. A holiday romance wasn&#039;t in Sasha plans but she finds herself attracted to Rome in ways she is not use to. I thoroughly enjoyed seeing Sasha fight her attraction to Rome. Granted the fight lasted all of a minute but it was nice to see. I enjoyed that Rome and Sasha were equally surprise by the chemistry between them. I love that Ms. Kincaid gave us a story which is a take of Romeo and Juliet. But unlike Romeo and Juliet the sex was I am sure hotter and hopeful the ending much happier. I adored Rome&#039;s determination to have a life with Sasha once he learned her real name. I love that Ms. Kincaid gave me a story where love really does conquer all. The journey was a bit unpredictable but it was enjoyable and I really hope that Ms. Kincaid will return to this world in the future.

Both Sasha and Rome are from warring Mafia families but neither knows it until after a passion filled night together, Sasha accidently discovers who he is. She runs of course and Rome is devastated. Fast forward 3 months and they come face to face again. What will happen when each of their families find out these two want to be together? I love how the story evolved. This was kind of a different take on the regular mafia type romances. He doesn&#039;t want to kill anymore and misunderstandings and betrayal have hurt both sides. Can they help their families mend and call a truce to their war, or will they be forced apart when betrayal rears it&#039;s head again? Elena Kincaid did a fabulous job of keeping the reader engaged in the story! Very highly recommend this book!!

This was a different kind of mafia read for me.... Rome and Sasha we’re perfect for each other, the passion that lit up pages were crazy, but it was them.. two people coming together not knowing much about each other until the next day when Sasha finds out who Rome is and does what she does best runs and hides..... and months later when their worlds collide again it’s up to them to mend and stop the bad blood that is between two families.... this was a quick read but I loved it the characters make me laugh and giggle and the heat was wow oh wow! I can’t wait for more of the story and to get to know more characters ... I think the reason I liked it so much worse because it wasn’t such a serious serious mafia book there is also a light side to the whole mafia thing almost like what if it’s two different people from two different families that did not get along there was awar bad blood , could they stop the war between the families... and that’s why think I liked it because it was a later read and this might’ve been the first mafia read that made me giggle This is a great book one for the series !