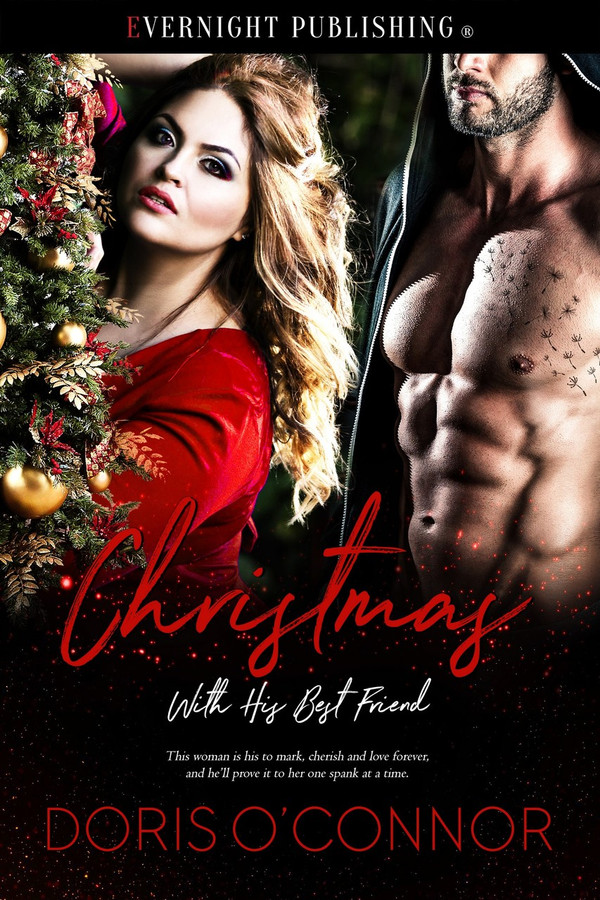 They’ve been friends for twenty years until … this Christmas.

How do you tell a sweet, naïve, and clearly vanilla girl that you like to tie women up and torture them for mutual enjoyment in your spare time? Josh Mackenzie has no idea, but when his best friend Emma walks in on him pleasuring himself, everything changes.

For Emma, coming face to face with her secret longings is mind-blowing. It’s one thing to fantasize about your best friend, but dare she take that leap into the unknown? Will it not ruin their friendship, and is—what would undoubtedly be awesome—sex worth risking that?

While Josh shares her fears, she is all he’s ever wanted in a woman, and he’s determined to show her that they can have it all. This woman is his to mark, cherish, and love forever, and he’ll prove it to her, one spank at a time.

Now that the moment was here Josh was lost for words. With his sweet little Em in his arms, her hazel eyes looking up him with so much trust … fuck it. What was he doing here? Instead of answering her, he pulled away, slid his hands in her hair and tucked at the pins holding it up. The dark blonde mass of silky curls fell in soft waves around her face, and he twirled one strand around his index finger.

“Josh? What are we doing here?” Her whispered question shot straight to his cock, and not trusting his voice to fucking work, he decided to show her instead. A soft gasp escaped her when he picked her up, set her on the kitchen counter, and pulling her legs apart stepped right between them. The action made her pencil skirt ride up, exposing the top of her stockings, and Josh groaned under his breath. He let his digits linger, half expecting her to slap them away, but when she opened her legs wider, he tore his gaze away from her pale flesh to check out her expression. Head down, she seemed mesmerized by the sight of his tanned hands against her skin, and the sweet scent of aroused woman filled his nostrils when he ran his hands slowly up her inner thighs. He could almost feel the heat of her cunt before her whisper stopped him.

Leaving one of his hands where it was, he tipped her chin up with his index finger, satisfied beyond relief to see the same need he felt reflected back at him in her eyes. The hazel orbs had darkened to almost black, and when she licked her lips in a nervous gesture, his gaze followed the movements of her little pink tongue. Visions of her on her knees, with that sweet mouth wrapped around his dick, as he shot his jizz down her slender throat, made his cock jerk against the zipper of his jeans. He growled low in his throat at the thought of marking her thus, and her expressive eyes widened. Her breathing sped up even more, making her tits strain against the sensible blouse she wore for work. With the two top buttons undone, the third was threatening to give way under the rapid movement, giving him tantalizing glimpses of the soft swell of her breasts. Josh couldn’t help it. His self-control and good intentions went out of the window at her untutored responses to him, and he trailed his finger lower down the soft skin of her neck, over her collarbone and lower still, until he reached that tiny ivory button.

His voice dropped to the one he used in a scene without any conscious effort on his part, and when he flicked that button open, Emma’s sweet moan of surrender was music to his ears. Watching her closely for her reaction, he flicked the next button and so forth, until the sides of her blouse fell open, exposing her amazing rack. The lacy, mauve bra left little to the imagination. Josh continued his one fingered exploration, and they both groaned when he circled her nipples. Clearly visible through the lace, the little pink nubs hardened under his gentle ministrations, and Em’s breathing kicked up another notch.

Josh trailed his finger lower, over the soft swell of her abdomen, which caused her to suck in her belly, and he smiled at her action.

“Have I ever told you how much I love your curves, little one?”

Her surprised jerk and strangled half laugh told him he hadn’t, and Josh inwardly kicked himself.

“Since when? You have seen your girlfriends, right?”

There was a wealth of bitterness in those few words compounded by her hasty grab for her blouse. She pulled the ends closed and wrapped her arms around herself in a defensive move that tore at his heartstrings. The Dom in him wanted to order her to strip, to take her over his knee and paddle that luscious ass of hers for disrespecting her body shape like that, and making assumptions about him to boot, but he hadn’t earned that right yet.

So, instead of acting on that impulse, which pushed adrenaline through his veins, he did the next best thing. Stepped away, crossed his own arms over his chest and gave her his best don’t-talk-such-crap-subbie stare.

It didn’t take long before she caved in. Uncertainty crossed her features, followed by confusion, and when she dropped her gaze to his chest, he finally spoke.

“Let’s get one thing straight here, my sweet little Em, I do, indeed love your curves. In fact seeing you waltz out of here in those damn tight pencil skirts you wear for work has me so fucking hard I have to jerk off the minute you leave.”

Clearly startled by that revelation, Emma jerked her head up, opened her mouth to say something, but one look at his expression seemed to change her mind. The Dom in him almost roared when she dropped her gaze—to his chin this time—and kept it there. His girl was a natural, responding to him without even realizing what she was doing, and wasn’t that the biggest turn-on yet.

“Next, I don’t do girlfriends.” That brought her head up again, albeit briefly, and he smiled at her sharp intake of breath, and the confusion written all over her face. “I haven’t done for a long time, ever since I realized I was in love with my best friend.”

I loved this book its a best friends to lovers story with a load of super yummy kink the characters are fab you can just imagine everything that is happening as you read it...

They’ve been friends for twenty years until … this Christmas. How do you tell a sweet, naïve, and clearly vanilla girl that you like to tie women up and torture them for mutual enjoyment in your spare time? Josh Mackenzie has no idea, but when his best friend Emma walks in on him pleasuring himself, everything changes. For Emma, coming face to face with her secret longings is mind-blowing. It’s one thing to fantasize about your best friend, but dare she take that leap into the unknown? Will it not ruin their friendship, and is—what would undoubtedly be awesome—sex worth risking that? While Josh shares her fears, she is all he’s ever wanted in a woman, and he’s determined to show her that they can have it all. This woman is his to mark, cherish, and love forever, and he’ll prove it to her, one spank at a time. Be Warned: BDSM, spanking

Love Doris&#039;s writing the story was short and sweet a dom claiming the love of his life really good reading

I liked how it was a quick but complete story. It was fun and sexy as hell. Totally worth getting. I purchased this book, it was not given to me for my opinion.

Christmas With His Best Friend is a holiday short that is long on greatness. Emma and Josh have been besties since high school, and when Emma catches her now ex cheating on her, Josh comes to stay with her to console her and help out with the rent. But her feelings of friendship for 20 years, soon start to turn to something else. Josh has been hiding a few secrets from Emma, and when she’s running late for work one day and forgets her keys, she sees a different side of him. She runs, but she can’t hide. This is an absolutely delicious read that was perfect for a holiday pick-me-up. I highly recommend it!

Loved how Doris shows with such vivid detail that a friendship can blossom into so much more. And as a submissive female myself... Oh... The joy that Emma finds and the wonderful HEA way that the book ends...:) love it!

Josh has had a thing for his roommate, Emma but is worried she won&#039;t like the way he lives his life, especially sexually. Emma has fantasies about Josh but doesn&#039;t think she&#039;s good enough with her curvy body. When she accidently catches him pleasuring himself to a picture of her, things snowball from there. Can Josh convince little Emma that she is just his type? Will Emma be okay with the fact that Josh is a Dom?

His Prize by Doris O'Connor