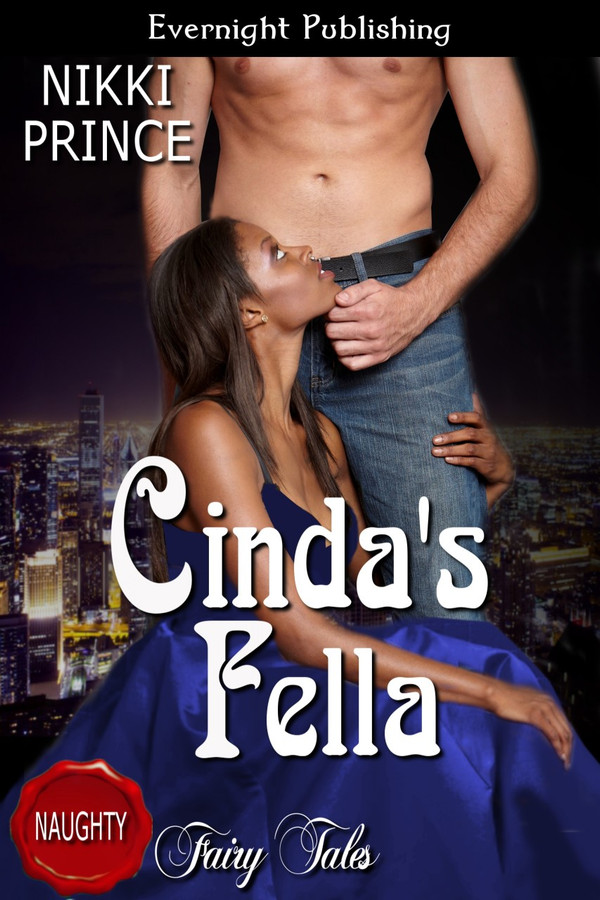 Once Upon a Dream, 2

Cinda A. Rella's life revolved around helping others. She's used to not getting what she wants, everyone else’s needs more important. She's spent her life taking care of her father, stepmother and two stepsisters. When her father and stepmother die, Cinda continues taking care of her stepsisters and runs from the only man who could give her everything she ever wanted.

Nicolai Charming is a Dominant used to getting what he wants, and he wants Cinda. Nico has the antidote for what ails Cinda, and he plans to make the fantasy he holds for them come true.

Will Doc Fairee's magic work one more time? Or will Cinda and Nico's relationship take a backseat to everything else?

She finally found her voice. “Nico, what are you doing here?”

He laughed and she flushed. What a stupid question. “Hmm, well, this is my office, Cinda.”

“Yes, right. I guess I meant why’re you here so late. But then that would bring up the same answer. You can be here as much as you’d like. I was just cleaning; I can go and come back when you’re gone. My regular janitor for your offices isn’t here.” She was rambling. He stood and with a gasp she hurried towards the door. Her only thought was of escaping.

“Going so soon, Cin? We haven’t seen each other in years.” He was barring her way. She stopped just in front of him.

“There’s a reason for that, Nico.” She licked her lips and groaned inwardly as his gaze riveted to her mouth and his grin widened even more.

He was right, he knew her, though that didn’t mean they needed to be together in any way, shape, or form. He advanced and she moved back. She held her hands up to stop him from getting any closer; he pressed his chest into her hands, and she discerned it was on purpose.

“Master…” The word was out before she could stop it.

“There, now tell me that doesn’t feel right. Tell me.”

She didn’t say anything, just continued to stare up into the most gorgeous eyes ever. She swallowed hard.

“You can’t tell me because it wouldn’t be true.” When he cupped her chin in his hand, she let go the ragged breath she’d been holding. His touch sent electricity through her body. He was always so gentle and caring, something she hadn’t had in her life before him or since.

She couldn’t tell him that, because it wouldn’t be the truth. She’d wanted him from the moment she’d met him. He used the pad of his thumb to stroke over her bottom lip and when she didn’t move away he moved his thumb and replaced it with his lips. She moaned, her hands still against his chest, but curled into his dress shirt.

He tugged at her lips with his teeth then teased along the seam with his tongue, demanding entrance. Unable to deny him anything she parted her mouth and moaned softly as his tongue filled her mouth.

He drew her even closer when he hooked his fingers into the belt loops on her jeans and tugged her forward. The evidence of his desire pressed against her lower belly through his pants. She didn’t resist him. In fact, she whimpered when he parted the kiss.

She licked her lips again and his gaze darkened.

As he said those words he walked her backwards and then she felt the desk bump the back of her legs. She opened her mouth to protest and it was as if he knew that’s what she was going to do as he covered her mouth with his own.

Besides their breathing, the only sound in the room was the rasp of her zipper as he undid her denims then pulled them down over her hips. They pooled at her feet and he picked her up and settled her on the edge of the desk, causing her jeans to slip off and onto the floor. She was in a pair of silk bikini panties and a t-shirt that was emblazoned with her business name, Midnight Cleaners.

He drug his mouth from hers. “This is your last chance to say no…” He was gently massaging her back. He’d always had strong, capable hands that turned her to putty.

“Please what, Cin? It hasn’t been that long that you don’t know who I am to you.” He pulled her t-shirt up over her head, tossing it to the floor. When he cupped her breasts and kneaded them, she arched into his hands. She cried out as he nipped the tops of her breasts.

“Who am I to you, Cin?” he said once more, a bit firmer than before.

Cinda’s Fella is a fun little take on Cinderella. Nico, we met in Waking Beauty, is a Dom determined to win back his runaway sub, Cinda. Cinda is determined to stay away from the man who holds her heart, at all costs, until on night when she accidentally runs into him at the office. I love that her cleaning company is employed by his corporation, lol. And how could we have Cinda without the two wicked step sisters, Anastasia and Drusilla? Yes, they get in on the act and cause untold trouble for Cinda, but when Nico steps in to rescue his wayward love, he makes a bargain with Cinda that puts her back in his arms and across his knees. The sex is hot, the passion unrelenting, the story telling divine. Ms Prince has again wowed me with her ability to tell erotic short stories that have immense heart and driving growth for the characters. And Nico is just . . . YUM! Gentle, dominant, sensual, and sexy . . . what’s not to love? The step sisters stories are next and (write faster woman) I can’t wait! This is another one that you need something cold to drink and the show on stand by for. Cinda’s Fella is a guaranteed hot afternoon read.