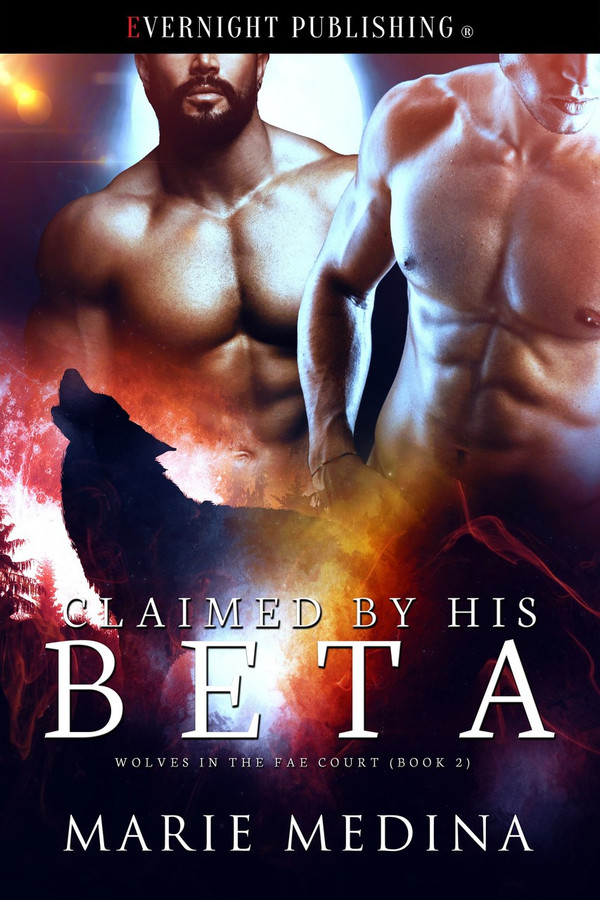 Wolves in the Fae Court, 2

Luke accompanied his Alpha to the fae court to do his job, nothing more. Since his mate’s death, he’s been fine with a few nights of solace here and there. He’s never needed anything more than that.

But his gaze keeps drifting to one fae in particular—Dane, the best friend of his Alpha’s newly found mate. When he finds out a human hurt Dane years ago, his protective instincts rise and refuse to be calmed. Protective feelings soon turn possessive as he learns more about the beautiful fae. Dane’s more than willing to come to his bed, but Luke wants more than that. Far, far more.

He’s going to have to take his clothes off to shift. Is he going to do it right in front of me? Dane tried not to think about that. The muscular man at his side intimidated and excited him, and he knew his desire would show if he wasn’t careful. “Well … we could go into the gardens. There doesn’t seem to be anyone there now.”

Luke nodded for him to lead the way, and Dane started walking.

He’s interested in me. He touched my cheek and squeezed my hand before. His eyes keep wandering over me. And he moves closer every chance he gets. What’s the harm in letting him see I want him?

Dane pressed his lips together as they walked away from everyone else. His gaze flicked over when Luke pulled his shirt over his head, just after they’d moved behind a high hedgerow. They stopped, and Dane cast his eyes down. He felt Luke’s fingers run along his jaw again.

“I don’t mind if you watch me. Or turn away. It’s up to you,” Luke said, tossing his shirt down.

Dane turned to face Luke. “I read shifters don’t have a problem with nudity.”

“We’re used to seeing others naked. It’s no fun running through the woods with your clothes held in your mouth.” Luke smiled. “Look at me if you want.”

Luke pulled his shoes off and started undoing his pants. Dane didn’t look away. The Beta was smaller than Gregor, but he was still larger and far more muscular than any fae male. His skin was evenly tanned, as if he spent a good deal of his time outside naked. His cock remained flaccid, but Dane could imagine what it would be like fully erect. He chewed his lower lip as he tried to keep his expression neutral.

Luke knelt, as if readying for his shift, but then he looked up. “Feel free to touch me. I promise I’m fully in control of the beast.”

Dane’s lips quivered as he smiled down at the handsome man at his feet. He’d seen other fae magically transform before, but the shift Luke went through proved far more dramatic. His eyes changed, and fur sprouted as his muscles rippled all over his body. Dane stood transfixed as the man became an animal—a beautiful gray wolf that licked its lips with a very long tongue.

Dane reached out and touched the top of Luke’s head, caressing the soft fur and feeling the warm skin beneath. The wolf licked his wrist and palm, and Dane felt a shiver go up his spine.

Luke stretched his limbs and sat, as if waiting for inspection. Dane touched his ears and ran one finger lightly down his snout. Luke nuzzled his nose against Dane’s hand. Dane moved around him and ran a hand down his back, and Luke rose, his tail swishing in either pride or pleasure.

Giggles sounded nearby, and Dane froze. He looked around, but the laughing fae seemed to move past them on the other side of the hedgerow, perhaps unaware of them and seeking some privacy of their own. Dane ran his hand over Luke’s back again.

“You may end up with quite an audience if anyone sees you like this,” Dane said.

Luke’s fur moved beneath his hand, and the transformation back came more fluidly, as if Luke pulled the beast inside. He looked up at Dane with those dark eyes.

Dane looked away this time, as Luke’s cock was no longer flaccid. He held his breath as he waited, but soon Luke began to get dressed. When he looked back, he could still detect the bulge, but Luke didn’t act any different. Perhaps shifters were used to becoming aroused when someone stroked them in their animal form. Dane didn’t have the courage to ask.

I honestly think this is a cute little series. It’s paranormal so that’s a plus for me. But I’m really enjoying these characters. And after the way this book ends, I’m definitely ready to see how that’s going to turn out. It’s going to be a doozy of a book, if I’m reading it right. Luke, is Gregor’s beta. Gregor is the alpha from book 1, coming to meet and possibly make a match with Jarod, the fae/wolf hybrid. You definitely need to read book 1, by the way, because these books coincide with each other. But while Gregor was getting to know Jarod, Luke was noticing his friend, Dane. And for Luke that was huge, since he’s lost his mate. But something about Dane is making Luke take notice and Luke wants to get to know the fae like never before. But he feels like he needs to take it slow, when Dane seems to want it to go faster. But Luke wants both of them to be sure and it not just be hormones, because Luke finally feels again like this could be a forever thing. Now it’s up to the two of them to work it out on how it’s going to go down. I really liked these two. Luke was just a sweetheart. With the death of his mate, he had lost any hope of finding someone again. But Dane just captured him from the get go and I loved it. Because everyone fought to keep him going and when he saw Dane, he didn’t give up hope that Dane couldn’t be important to him. He still had hope that he could find love again. And that was perfect. But I loved Dane too, because even with what had happened to him, he didn’t give up either. He didn’t exactly get around much, but when Luke showed interest, he was interested back and for both of them, it was a very special thing. It was huge. When tragedy strikes, it’s hard to want to move on from it. Both of these guys had had tragedy in their lives, but they overcame. With some help, but they still did. And they held on, even if minutely, they held on to hope that maybe someday, they’d find their happiness in someone else. And it is a big deal. So I really liked these guys because they had a hope for the future. It took communication and compromise, but they learned to work it out, because they knew what was important.

This is a sequel to Claimed by his Alpha, focusing on Luke, the beta of Gregor’s pack. Luke had lost his first mate, Sabina, to cancer and it was widely believed that there would not be another mate for him. That is until Luke meets Dane, Jared’s best friend in the fae court. As it turns out Jared is the mate to Gregor. Then Dane turned out to be the mate for Luke, which makes things better and worse at the same time. It was nice seeing Luke letting go of his past, and he knows that his dead wife would be happy to see him in a relationship again. There is one thing that Dane is trying to figure out that could break their relationship. Dane is not sure what his feelings are for Luke. He knows he is attracted to him, but does he really love him as much as Luke. So he held back after Luke left, trying to understand their relationship. I would have liked to see the story longer, really going into details of Luke’s and Dane’s past. A sweet romance that shows how you can overcome anything with a lover by your side.

Claiming His Bride by Marie Medina