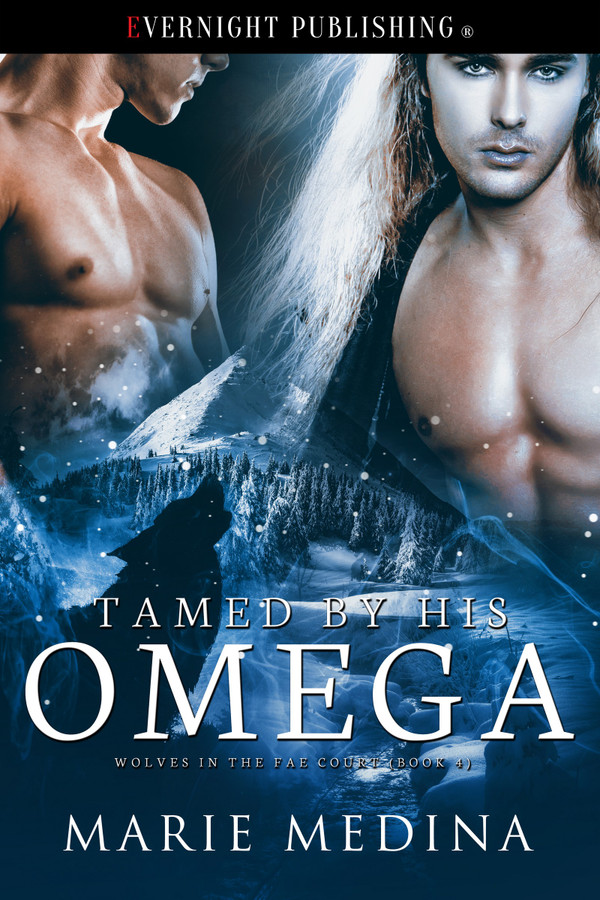 Wolves in the Fae Court, 4

Ryden agreed to represent the Sons of Fenrir at the wedding of the fae king with every intention of leaving the reception as fast as his strict code of conduct would allow. Finding his mate there leaves him reeling, especially since his clan will never accept the omega wolf shifter. Ryden has a duty to his people and can’t allow Owen to influence him, no matter how sweet and tempting the little wolf proves to be.

But Owen refuses to give up. He understands why the fierce warrior thinks they won’t be a good match, but he feels the gods know what they’re doing. His persistence lands them in trouble, though, and now all he can do is continue trying to convince his mate they were fated for a reason.

Owen does all he can to woo the stubborn man, oblivious to how their mating is going to change fae history forever.

Owen watched his mate walk away. That growl had startled him, yet it had also sent a jolt of desire up his spine. The Fen paused and then took a set of steps down from the main patio and away from the reception. Owen hesitated a moment, but then he followed. He found himself distracted by the sight of Ryden, even though all he could really see was his hair and the black cloak he wore. He moved with such grace for his size. His hair fell in snowy waves down past his waist, and the contrast to the dark cloak was beautiful as he walked.

But then Ryden stopped, his shoulders slumping. He turned and crossed his arms as he glared at Owen. “Are you sure you want to follow me into the woods?”

“Is that where you’re going?” Owen asked as he looked ahead to the path that formed at the tree line.

Ryden looked back in the direction he’d been heading for a moment. “I don’t want a little pup tagging along behind me the rest of my life. I have responsibilities. A certain status within my clan. My mate needs to be someone very different.”

“If I shifted right now, trust me, you’d feel like a pup.” He turned and strode off again.

Owen followed him into the trees. “You are much bigger than I am, but you wouldn’t be too much for me to handle.”

Ryden kept walking, and Owen stayed with him and waited for a response. Just when he thought he wouldn’t get one, Ryden stopped and drew him close. He took a deep breath, his icy blue eyes looking more wolfish as he did so. “Your scent is growing more tempting,” he said softly. He backed Owen up against a tree, their lips almost touching, but then he turned Owen to face the tree, grinding against his ass.

“This what you want, little one? To lose your virginity up against a tree? To be at the mercy of a man who doesn’t believe in giving sweet words and soft touches as he sates himself?”

Owen trembled, at once afraid and excited. Ryden’s scent aroused him, yet he could feel how strong the Fen was. He knew nothing about Ryden or his character and had no idea if he could trust him. He’d been warned to be wary of men from the fierce clan, but his excitement at finding his mate had made him feel bold.

“No, I don’t want you to take me like this.” He struggled to get free, relieved when Ryden let him go and backed off. He leaned against the tree and looked up into Ryden’s eyes. “And I’m not a virgin. I had no plans for us to just jump into bed right away or—”

Ryden gripped his arm, his eyes going wide. “You aren’t?”

Why is he so shocked? “No. I’m twenty-five. I lost my virginity a long time ago. I might look small to you, but like I said, I’m a grown man.”

Ryden growled again, the sound so much louder this time. And his icy blue eyes seemed to glow.

Owen pulled away, wrenching his arm free. “What’s wrong with you?”

Ryden turned his head away sharply, seeming to struggle to speak. He pressed his lips together and turned his back to Owen.

After a moment, Owen moved around so they could look at each other again. “You okay?”

Ryden’s eyes flashed again. “My wolf doesn’t like knowing someone else has touched you.”

I really have enjoyed this little series, so much. And this book proves to me why I love omegas so much. Once again, the omega is looked at as weak and lowly, but it is the omega making the changes. Wanting better things for those involved. And although the omega may not be strong in strength, he is strong in heart and will. And those make just as much of a difference. When Owen approached Ryden and the royal wedding, Ryden knew immediately that this little omega was his mate. But being a Son of Fenrir, different expectations were to come from him. He did everything he could to discourage Owen, but Owen kept pushing and was insistent that it was meant to be. Ryden fought with all he could to keep from touching him and making things worse, but his power forced Owen into a heat, that shouldn’t have been possible. But Ryden has more power than even his clan leader and things are changing. And with Owen, Ryden is slowly starting to see why. The fates have given him a mate who can help change the secret they so closely guard. But the elders of his clan refuse to accept this mating or anything that goes with it. They want what they want from Ryden and Ryden finally realizes his little mate was right. It’s time for change. But the challenges are going to come with tricks, he suspects and he has to be ready for everything or lose it all. I love Owen so much. I really do. He is exactly what clans need in omegas. He doesn’t have to strength of alphas or betas, doesn’t know how to fight with weapons, but he has the strength of heart and wisdom to see things that others aren’t seeing. He can affect change with different views and ways to see things differently. He can affect change by showing that not everything has to be done violently. Even if some things require a harsher punishment. And because of that, Owen is powerful in his own right. Because power and strength does not always come from muscles and years of training. It comes from the strength of your heart and character. And Owen has it in spades. And because of that as well, he has shown Ryden a side of himself he never expected. He has given Ryden a new outlook on things he never expected to have either. His life is changing before his eyes because of his little one and even though Ryden knows this next part of their journey is going to be a rough and tedious one, he knows Owen is right about things needing a new breath of life. And I love it. It just shows, once again, that the omegas are really the strength of the clans and pack in what they do and how they think. I’m glad I’ve gotten to read this little series. It’s been a fun set of books and I really enjoyed them.