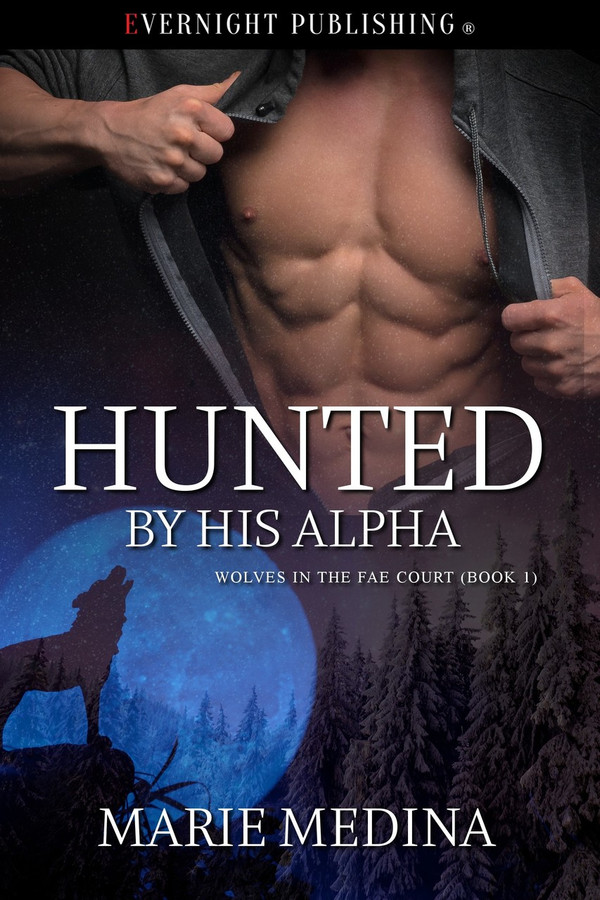 Wolves in the Fae Court, 1

Gregor arrives in the fae court ready to cement an alliance. When he finds his mate there, he doesn’t hesitate to make their union a part of the momentous event, even though he neglects to inform his newly found mate about any of this.

Jared is drawn to the Alpha of the wolf pack immediately, unable to resist the man’s touch and more than willing to go to his bed. But when Gregor decides their official mating is a done deal, Jared bristles. He sets out to teach the shifter a lesson about respect, despite the fact all he really wants to do is submit.

When the Alpha is denied and told to learn how to properly court a fae, he finds something very interesting in the ancient texts of the palace library. And then, The Hunt begins…

This story also appears in the Denying the Alpha: Manlove Edition anthology

Gregor arrived at the fae palace early so his Beta, Luke, could inspect their rooms to his satisfaction. They had adjoining suites in the luxurious building that looked like something out of a fantasy novel. Gregor had been given leave to roam the palace freely—apparently, a servant would find him when he was needed. Gregor wasn’t completely sure he wanted to know the details of how the fae pulled that off.

While he was glad the fae were finally ready to form an alliance, he had to admit he didn’t exactly understand the fae. They insisted on staying in their own realm most of the time. If he understood correctly, their “realm” was basically a very small continent hidden in the middle of the Atlantic Ocean. Asmund, the fae’s current king, had offered a weary smile when Luke had asked if they were responsible for ships and airplanes disappearing. As that smile had faded, Gregor had noted that the king hadn’t actually answered the question.

As shifter packs all over the world expanded, the danger of discovery grew. The fae had remained hidden for thousands of years with the aid of their magic, and soon, shifters might have no choice but to depend on that magic to keep them safe from the humans who would likely fear them.

Gregor eventually found the gardens and took a deep breath once he was back outside. He hated being cooped up for too long. He doubted he had time to shift and have a little run, but he could at least stretch his legs.

As he walked, he felt his body stirring. Gregor hadn’t taken anyone to his bed for a long time, yet now seemed an odd time to suddenly start feeling desire building. But soon, a scent hit him full in the face—and other places as well. The Alpha stopped in his tracks, confused. He scented another wolf shifter. It was faint yet unmistakable. Gregor moved slowly as he tried to track down the scent. A soft sound caught his ear, like a page turning, and he walked down a hedgerow toward it.

On a bench in the middle of a tall circle of hedges, Gregor saw a man lying on his stomach and reading a book. He was thin and had the delicate, beautiful features of a fae. His long dark hair spilled down his back, stopping just above the perfect curve of his ass. The man seemed to sense he was being watched, and when he looked up, Gregor gasped at the beautiful golden hue of his eyes.

He’s part wolf. And mine.

Gregor approached slowly, even though he wanted nothing more than to kneel and kiss the man’s full lips while sliding one hand over his ass. The man wore leather pants that clung to him perfectly, but he was barefoot. The material of his loose-fitting shirt was so thin it did little to hide his body, much to Gregor’s delight. The man closed his book and sat up as Gregor approached.

“You must be the Alpha of the wolf pack,” the man said.

“Yes. And who are you? I smell wolf on you, but no wolf has ever been as beautiful as you are.”

The man smiled and rose, standing just a little over five feet tall. “I’m Jared, the king’s cousin. And one of the reasons you’re here, actually.”

“You are?” He definitely liked the sound of that.

“Yes. My mother was fae, but my father was a wolf. He left when I was very young.” Jared looked down, frowning. “Because I couldn’t shift as a child.”

Anger rose in Gregor. “What was his name?”

“I can find him, if you wish. Abandoning your mate and your cub is a crime.” I’ll beat him senseless for hiding you, for nearly robbing me of my mate.

“He’s dead. A car wreck over ten years ago. My mother has passed away as well, though much more recently. Asmund has been more like a big brother than a cousin to me, and he finally decided to give this alliance a chance because he wants me to know your people. My other half, so to speak.”

The entire time he’d been talking, Jared had also been moving closer to Gregor. Reaching out, Gregor slid his hand around Jared’s waist, which made the smaller man gasp.

“Did you even realize you were doing it? Moving closer to me?” Gregor whispered.

“No.” Jared looked up at him, arching into Gregor’s body a little. “Is it because you’re the Alpha? I know so little about shifters.”

“A little bit, maybe.” He leaned down and buried his face in Jared’s thick, silky hair, slowly breathing the man in. “I followed your scent here.”

“Yes.” He took Jared by the chin and tipped his head back. “Will you come to my bed tonight?”

Jared actually shuddered. “I think I would like that.”

Jared licked his lips. “You’ll have to promise not to crush me.” His hands slid up Gregor’s chest and then over his biceps. “You’re much larger than any fae I’ve ever been with.”

Gregor growled low in his throat, not liking to think about Jared being with others. He loved the way Jared’s grip tightened on him at the sound, but he didn’t want to scare his little mate away. “I can be gentle, but I think the wolf in you will take to me quickly.”

“How long will you be here?”

Jared licked his lips again. “Since I’m one of the reasons you’re here, seems only right I make you feel welcome.”

Gregor bent and kissed Jared, claiming his mouth with a fierceness that surprised even him. Jared melted into it, and then he actually grabbed Gregor’s shoulders and hoisted himself up so he could wrap his legs around Gregor.

Gregor’s wolf rose within him, demanding that he claim his mate now. But he made the beast retreat. There would be time enough later to thoroughly claim the sensual creature wrapped around him. He slid his hands under Jared’s ass and squeezed both cheeks. They both panted when the kiss ended.

“Always wanted to be fucked by a big, strong man like you. I’ve never dared to sleep with a human man.”

Gregor caressed Jared’s ass. “Never dared? Why do you say it that way?” He hated that his mate had been with other lovers, but he knew he would simply have to accept it if he wanted this man to be his.

Jared rested his hands on Gregor’s shoulders. “My magic is weak because I’m half-blooded.” He pushed his hair aside, revealing his pointed ears. “I can glamour them, but there’s always a danger my magic will fail. Same thing with portals. If I was in danger, I might not be able to get away. Or use magic to defend myself.” He bit his lip as he unwrapped his legs and slid down Gregor’s body. “My best friend … he was raped and beaten by a human. He was only fifteen. I was fourteen. It scared me so much, and I stayed with him while he healed. He made me promise to be careful around human men. I even stayed away from human women.”

“I’m sorry about your friend. Men can be monsters, and I’m glad you were careful. You’re so beautiful I think you’d have men all over you, eager to possess you.” He caressed Jared’s cheek and laughed. “Just as I am.”

I was reading some of the other comments on GR about this when I was entering my review, and I had to laugh a bit. They were complaining it was too short and you didn’t get much out of the story, but I disagree. The author packed quite a bit in the short story she wrote. And I found quite funny to a degree. And quite happy about it. I’m an alpha/omega fan. Pretty much everyone knows this. I’m also an omega advocate. Always have rooted for the ‘Underdog’, so to speak. What struck me funny and pretty awesome about this book, is the alpha of the wolf pack was trying to make an alliance with the fae court. Everything seems to be fine and dandy, until he gets a whiff of his mate, and they all but practically consume each other. They don’t, but it’s a close thing. But where Gregor made his mistake, is that he went ahead said he’d agree to everything as long as Jared mated him. Or in the fae world, betrothed each other. But it backfired on Gregor when Jared refused, because he was left out of the negotiations and treated like a thing or a common whore in his words. So Gregor had to change his way of getting this alliance. I was shouting, ‘yay’, when Jared put his foot down. Good for him. No one should be treated like their opinion don’t matter. I don’t care if they’re mates or not. And Gregor had his hands full with the hybrid and I was glad for it. He deserved what he got for assuming what he did. Yes, the mate bond is a good thing, but it technically doesn’t bring instalove or happiness. That comes with a bit of time. And I was happy to see an alpha put in his place. Woo your man.

A steamy short story with werewolves and Fae. You’ll probably need a fan beside you as you read this steamy story. I did. From the beginning, Gregor knows Jared is his, and lets him know it. The steamy kiss they share is a nice prelude to the passion between them. There are pressures put on the characters and it’s up to them to decide who is being real and who is telling lies. Jared knows he really doesn’t have a choice, but he is fighting because he is stubborn–the wolf in him wants to submit. So, he makes an ultimatum, Gregor needs to woo him. I had to laugh at Gregor’s reaction to romancing Jared. He’s used to everyone following his orders. Plus he is confused since he can tell that Jared wants him as his body reacts to his touch. He doesn’t understand that poor Jared has no time to comprehend everything. The learning curve is fun to read about. A steamy quick read with fun characters with an interesting ending.