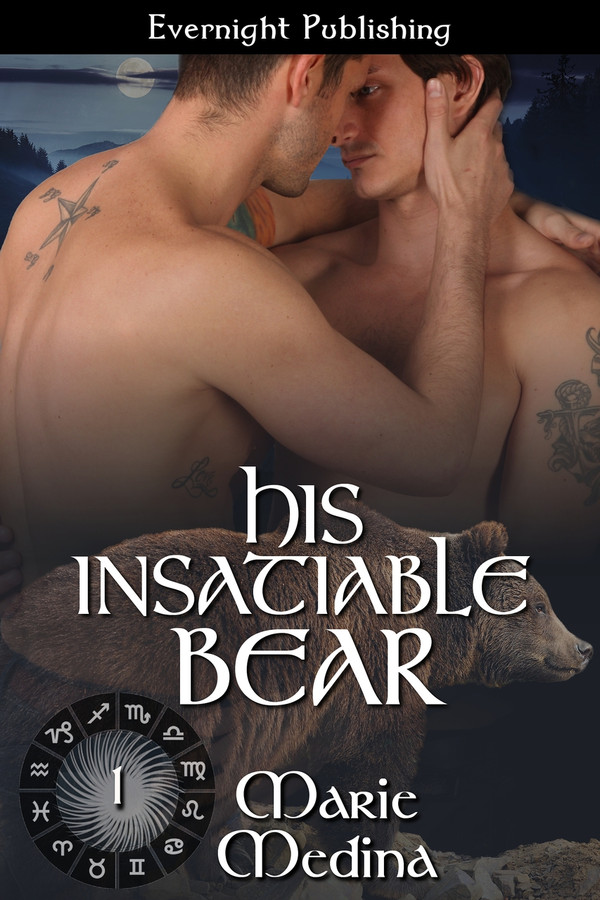 Locke has hidden in the shadows his entire life, and he never expected to find a mate for himself. Bear shifters are supposed to be extinct, but he and his family finally seem to have found refuge. His new life becomes more appealing when he discovers his mate in his new home.

He’s shocked this mate is not only male but also a vampire, yet he has no desire to turn from what the gods have given him. But instead of submitting the way Locke craves, Ash doesn’t believe they’re actually mates and resists Locke’s advances. But Locke can see Ash is equally affected by the mate bond, and he won’t give up until his vampire has given in to him, body and soul.

A familiar scent wafted up the hill on the breeze, and Locke stopped where he stood. He crouched and saw two horses and two vampires dressed in linen robes. Both men had dark hair and faced away from him, but Locke knew one of them was Ash. The scent of honey and damp moss enveloped him, and he shifted to human form and knelt there, panting. Had Ash somehow found out who he was? Why else would they be here? Since his first visit, Vane had never come unannounced, always telling Mama Cat when his next visit would be, and Locke had liked that gesture of respect. He stood and went to retrieve his clothes, his hands shaking a little as he dressed. It was much easier to be rational and patient away from Ash. The breeze picked up even more, carrying Ash’s scent and making the man’s hair fly around him. Locke could see his profile now, and he wanted to rush down the hill and kiss the vampire again.

He took a deep breath and wiped his sweaty hands on his linen trousers. Next he glanced down to make sure he was presentable. Mama Cat stood outside their little cottage with Lex in her arms, and Ash smiled at the baby. Lex reached for him, and Ash took him without hesitation, smiling and bouncing him gently. Locke’s heart swelled at the sight. His mate held his little brother and looked at him lovingly. Mama Cat wouldn’t live forever, and he would have to raise Lex in the end. Seeing Ash take to him gave Locke the courage to proceed down the hill.

Locke didn’t bother being quiet, and everyone soon looked his way. Ash blinked as if he were surprised and just stared at Locke as he approached.

“Yes, though I didn’t mean to.” Ash’s gaze roamed up and down Locke. “You’re one of the bear shifters?”

Locke nodded. “Yes, I am.” He looked over at Vane, who had a mischievous grin on his face.

Vane cleared his throat and moved closer. “Ash said he met a young man named Locke, and I thought it had to be you. I see my guess was correct.”

Locke bowed, trying to observe some semblance of decorum. “I’m happy to meet you, Lord Vane, especially given how pleased I was to meet Ash.”

Mama Cat eyed him, her silver braids dancing as the wind picked up. “I knew something had happened last night. You’ve been too quiet today.”

Locke nodded. “Yes.” He looked to Ash. “It worried me at first, but I’m going to trust that the gods know what they’re doing. I thought I had to wait and make plans, but here they’ve forced my hand a second time.”

“What are you talking about?” Ash asked, his hand moving in circles on Lex’s back as the baby chewed on Ash’s hair, which the vampire didn’t seem to mind.

Since he couldn’t take one of Ash’s hands while the vampire held Lex, Locke came forward and cupped his cheek. “You’re my mate, Ash. I was confused at first, but there’s no mistaking it. You’re mine.”

Ash took a step back out of his reach, staring at him as if he’d just pulled out a weapon. “Excuse me? That’s not how matehood works.”

Ash pulling away had hurt, but Locke pushed the pain away. “Yes, it is. Vampires aren’t the only ones with fated mates. We have different gods. I mean no disrespect to the deities you serve, but the bear gods select mates very carefully. Refusal is not an option. Bad luck will befall both of us if we ignore this.”

Mama Cat came over and took Lex from Ash, who still stared at Locke. Vane observed them all closely, though his expression revealed nothing.

“How exactly do bear shifters find mates, ma’am? I’ve never heard of this before,” Vane said.

“By scent,” Mama Cat said. “Perhaps we should let these two talk?”

“No,” Ash said, cutting his brother off.

“No?” Locke said. “No? You don’t want to talk to me? You certainly liked me kissing you last night.”

“Then why didn’t you tell me last night instead of making cryptic remarks and running away?”

Locke cleared his throat. “I was nervous. And surprised. Our race is nearly dead, and yet the bear gods fate me to a male vampire? I was shocked actually. I’d probably have run away without even speaking to you if your scent hadn’t been engulfing me.”

“You find your mate by scent? How do you know what scent you’re looking for?”

In a world where bear shifters are rare, Locke has carved out a life for him and his family. While out roaming one day he discovers his mate, The shocks are in order when he learns said mate is not only male but a vampire. He’s still elated because mates are a gift and he’s more than ready to unwrap his. Not so fast though since Ash, his reluctant mate isn’t ready to commit. It’s going to take more than promises or even a few kisses to convince Ash that they are desined to be together forever. This book is the beginning to a new series introducing Locke and Ash along with their supportive family. The easy writing style makes it a quick enjoyable read. Both men are likeable and the supporting characters help move the story along nicely. I found this brand new shifter world interesting especially between a bear and vampire. This duo promises to deliver all sorts of intriguing drama,anything may happen. I will say although the writing is easy going the speech pattern was a touch disconcerting. They spoke in almost very formal somewhat quaint fitting for another time and place. I assumed this was appropriate for their world but not so much for mine. There’s not much of a back story maybe it’s covered in the upcoming books. I’m definitely looking forward to those since I found the supporting characters a lot more interesting. All in all it was a nice start to a new series.

I&#039;m really enjoying reading about this whole world set in Valladora! I haven&#039;t read all of the series&#039; but I loved the books in the Year of Gods series, so I bought this, eager to get a new group of characters and relationships, and it did not disappoint. I enjoyed Locke and Ash, but honestly, I think I&#039;m looking forward to the next 2 stories even more - I&#039;m definitely hooked to find out about the backstory for Ash&#039;s two brothers and their mates...Vane and Arion&#039;s story, can&#039;t wait for the next one!

Tamed by His Omega by Marie Medina

His Second Chance by Marie Medina