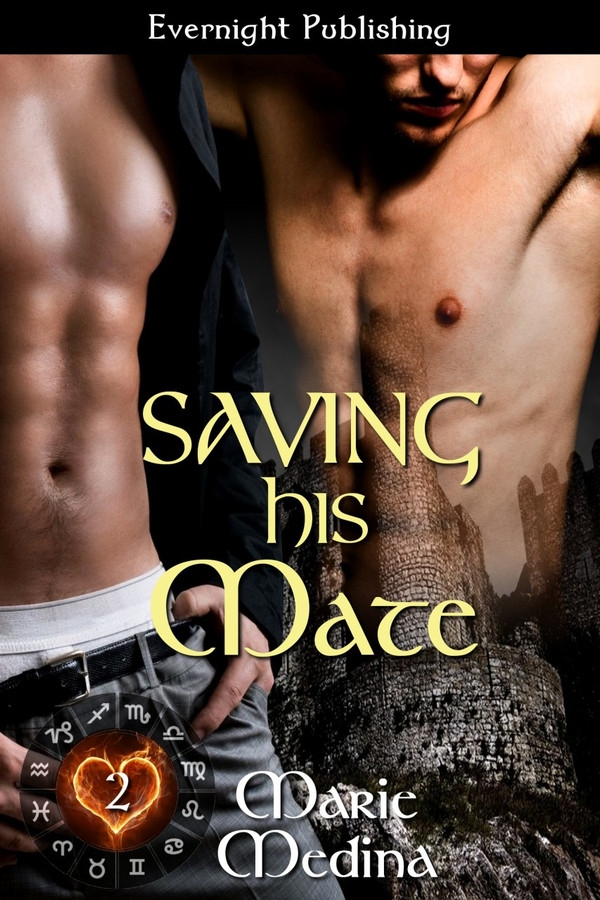 The Year of Hearts, 2

Lance devoted his life to serving a vampire, Elizabella, until the day she committed suicide. These tragic events bring another vampire, Tavok, into his life. Though Lance knows immediately that he and Tavok belong together, he wonders if he deserves to find love while still so overcome by grief.

Tavok can hardly control himself when he meets Lance, his fated mate. Tavok knows Lance needs time to grieve, and he does his best to wait. Everything is perfect when they finally make love, but then Kadlin, Elizabella’s twin, arrives and makes no secret of his desire to possess Lance. Kadlin disappeared years ago after aligning himself with a demon, and Tavok will do anything to keep him away from Lance.

When Kadlin spirits Lance away to the demon realm, Tavok is racing against time to save his mate before Kadlin does something that will separate the two lovers forever.

Lance turned and looked behind him, searching for Tavok. Movement within an archway caught his eye, and he stood and walked in that direction. He found Tavok concealing himself in a corner, looking guilty and partially hiding his face behind his long blond hair.

Lance bowed slightly. “Your care is appreciated, my lord, but you’ll only tire yourself worrying about me all the time.”

“You’re all I can think about, Lance. I can’t help it.” Tavok came out of the corner and stood only inches away. “And please use my name. It makes me happy.”

Lance appreciated Tavok’s bluntness, yet something about it felt very demanding now. “I’m adjusting. Forgive me,” Lance said. Tavok licked his lips, and Lance mirrored the gesture, longing to kiss him. They had not kissed yet, though Tavok healing his wound had made Lance’s blood boil like no kiss ever had.

“How are you? I know you need time, but I want nothing more than to comfort you.”

My greatest comfort would be found with my cock buried deep inside you. “I know … Tavok.” Lance cast his gaze down. “I am well. She was unhappy, and if the gods are merciful she is now at peace. I will recover from losing her far sooner than I will forget how I failed her.”

“You loved her so much.”

Tavok’s whispered words nearly shattered Lance’s heart. He’d never heard such sadness in anyone’s voice, not even Elizabella’s. He made himself look into Tavok’s eyes, knowing he had to set this straight.

“Tavok, I know what you’re thinking, what everyone thinks. I was not in love with her. I am not mourning the loss of a lover. She was so good to me. And after she lost her mate,” he shook his head, feeling momentarily overwhelmed, “she needed me so much. I don’t know why she chose me, but it pleased me that I could give her something no one else could. It was never sexual or romantic.”

Tavok looked extremely relieved, though he did a good job of composing his features under Lance’s scrutiny. “I am glad to hear that, but it seems unfeeling of me to be happy while you’re suffering.”

“I know you can’t help it.” Lance smiled sadly. “When she met her mate, she came home singing. She danced around the foyer, twirling like a little girl in a new gown.” His smile faded as he thought of the foyer and pictured her jumping to her death.

Tavok came forward and took Lance’s face gently in his hands. “We can talk about it, or we can be silent on the subject. I want to spend the evening getting to know you. Tell me what you need, and you shall have it.”

Lance looked into Tavok’s eyes, which were green now. Vampire’s irises remained white most of the time, and crimson and black were the only colors that had the same meaning for all of them. Was green sadness for Tavok? Longing? Lance didn’t know, but spending the evening together would help him learn. “I would enjoy spending the evening with you.”

“Then join me in my room. We can talk or play a game of castles.” Tavok smiled. “I could read you some of Ettore’s bad poetry.”

Lance gave him a small smile. “I have not played castles in so long, I am sure you would win, and I will pass on the poetry. I want to talk with you.” I want to touch you, want to take you.

“Good. I’ll walk you back. I need to feed, but I will only leave you a few minutes.”

Lance grabbed Tavok’s hands as he began to pull away, and Tavok stared at him with wide eyes. Lance released Tavok’s hands after a moment, trying to rationalize his reaction. The idea of Tavok taking from another angered and upset him.

“What is it, Lance?” Tavok’s face fell. “I didn’t think mentioning drinking blood would bother you. Elizabella drank directly from you, didn’t she?”

“Only at the end, after her wits were completely gone. This has nothing to do with her. I’ve kept myself at a distance, but I was not rejecting you. You should be drinking from me.” While he didn’t want to be dominated or subdued, he didn’t like thinking of Tavok drinking from another more often than he had to. “I can’t give you as much as you need until I’m turned, but feed from me tonight?”

Tavok pressed close and put his arms around Lance’s neck. “I’m happy to hear you have no doubts about me turning you. I could not go on without you if you chose to live a human lifespan.” He ran one hand into Lance’s hair. “I only wanted to give you time, but I have been longing to drink from you since I first scented your blood. That brief taste as I healed your wound was not enough. Oh yes, I’ll feed from you tonight.”

The rapturous and lusty expression on Tavok’s face made Lance moan, and he wrapped his arms around Tavok, whose eyes widened again in surprise. They were starting to go crimson already. Lance crushed his mouth against Tavok’s. The vampire stiffened, but then he began to fight for control. The clash of teeth and tongues made Lance hard, and he knew Tavok could feel it. Tavok tightened his fingers in Lance’s hair. Feeling even bolder when Tavok sighed, Lance grabbed his hips and began to grind their bodies together.

Lance has served one vampire for ten years and now has found that he is another vampire&#039;s mate. Although he has no trouble with the fact that his mate is a man, he struggles with moving on with his life after his mistress has gone crazy and died. When his mistress&#039; twin brother comes back from exile, more trouble faces Lance and Lord Tavok before they can cement their life together. Although this is the second book in the series and refers to things that must have happened in the first one, enough details were given to keep me from having any problems following the plot. I enjoyed watching the two main characters try to find out how they would fit together and that the &quot;one and only mate&quot; aspect did not mean smooth sailing, even though both seemed to automatically assume that they would work things out together. It had a little bit of the &quot;insta-love&quot; flavor to it, but not so much as to be off-putting. The villain was very villainous, and as details of his crimes came out, it made more sense of Lance&#039;s mistress&#039; problems and helped him move on which I liked. For the length of story, a lot happened and the set up for the third vampire brother&#039;s story was given without taking away from the main characters. I also liked how it combined feudalism and paranormal aspects.

Chasing His Mate by Marie Medina