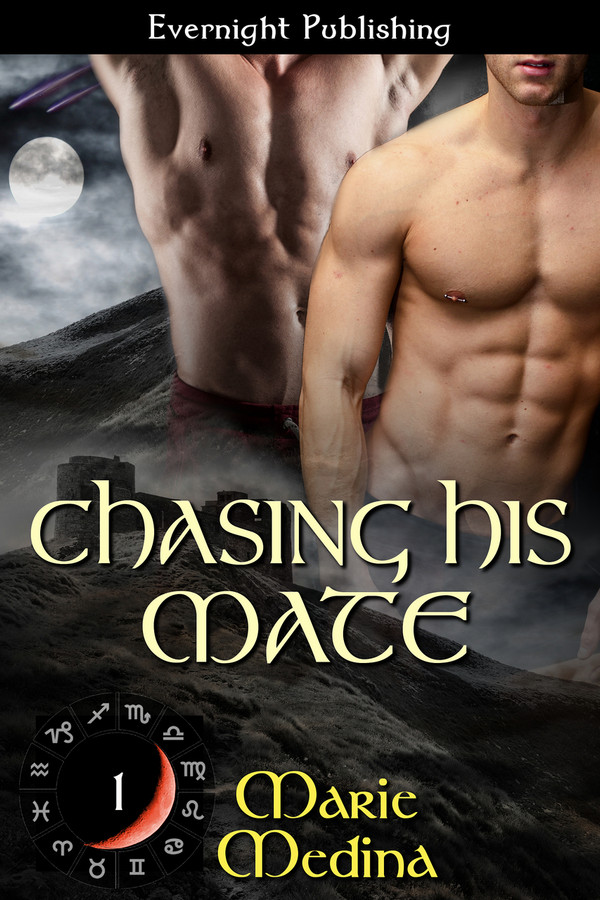 The Year of Moons, 1

Stryker has been looking forward to finding his fated mate for decades, but from the start, nothing goes as he’d dreamed. His mate refuses to even meet him, denying the mate bond without giving him a chance and actually running away to avoid hearing the vampire’s pleas.

Joseph sees humans who throw themselves at vampires as weak and stupid, and he has no intention of giving up his free will simply because a vampire orders him to. His heart has been through enough without being forced to pretend he loves someone, so he flees. He wants true love and sees no logic in trusting fate to simply drop the real thing right into his lap.

But Stryker refuses to give up and pursues his mate, prepared to do anything to make Joseph see what he’s really running away from.

“Perhaps the gypsies have some herbs that would help your eye,” Joseph said.

“It’s fine. I have periods like this when the sensitivity persists.”

Joseph didn’t seem convinced, fixing his gaze on Stryker. “You said just last night that you’re glad to have my friendship. The nagging comes with the friendship.”

“Nagging?” Stryker said with a laugh.

A grin spread over Joseph’s face, and his eyes sparkled with humor. “Yes. My family’s specialty.”

Stryker laughed again. He’d told Joseph he valued his friendship to stop other words, more seductive words, from coming out. Love hadn’t grown in his heart, not yet, but he’d never felt this close to anyone else, aside from his brothers. He’d cared for all of his lovers, but he’d never been able to talk with them the way he could with Joseph. Stryker often found himself too busy for friendships, and for now, he felt content.

“It doesn’t bother me. I just don’t want you to worry.”

“One of the many flaws you claim to have,” Stryker said as he handed the reins to Joseph so he could stretch his arms and rub his shoulders.

“I do that?” Joseph sounded surprised, his voice rising as he asked the question.

“Yes.” Stryker extended his right arm and worked his shoulder muscles, then let his arm rest on the seat back, a few inches behind Joseph. “You’re hard on yourself. As if you’ve been put down a lot by someone,” he added in a softer voice.

Joseph’s expression clouded a bit, and he rubbed the reins with his thumb. “Edward … he was just like that,” Joseph said in a rush of words, as if uncomfortable. “Critical of everyone. No one ever did anything right.”

Joseph nodded. “He’s not worth talking about.”

“I’ve had a few of those relationships.”

They rode on in silence for a while. Stryker wondered if he was only imagining the tension between them. They stopped at a watering station, and Stryker pumped out water for the horses while Joseph went into the woods to relieve himself. As they were readying to leave, Joseph slipped trying to get back onto the seat, and Stryker caught him and pulled him up. Joseph’s body slammed against his, and Joseph gripped him tight, his eyes wide with startlement.

“You all right?” Stryker said, not wanting to let his mate move away.

“Yeah. Glad you caught me.” Joseph took a few deep breaths, closing his eyes a moment.

Joseph opened his eyes, and the need in them was blatant. Stryker ignored the warning bells in his head and closed the distance. Their lips met softly, and Joseph deepened the kiss first. Stryker drew him closer and let his mate do as he pleased. Joseph explored his mouth with a slow curiosity that made Stryker shiver. Their tongues danced against each other, and Stryker fought hard to keep his fangs from descending. Joseph ran one hand into Stryker’s hair and tilted his head to delve deeper. Stryker moaned and tried to draw back, worrying he’d give his secret away. Joseph wouldn’t let him. He took Stryker’s head in both hands and kept kissing him, changing the angle and nipping at Stryker’s lips. When he actually sucked Stryker’s lower lip into his mouth, Stryker used a measure of his superior strength to free himself. If they kept going, he’d bite Joseph, and then there’d be lots of explaining to do.