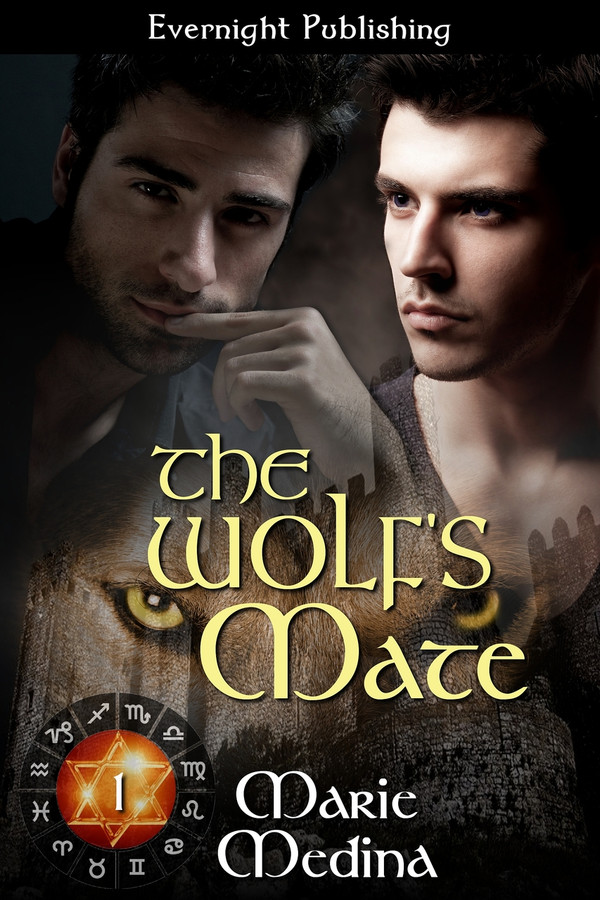 The Year of Stars, 1

Hatori’s life changed forever when he discovered that his real father was a lycan, as his frequent illnesses suddenly made sense. After achieving his first shift into wolf form, he hoped the last remaining clan of lycans could offer him some relief after a lifetime of suffering.

Yet nothing goes as planned when he travels east to meet with this clan. Since his first full shift, Hatori’s sensitivity to—and craving for—vampire blood has been a great burden. Surrounded by very tempting vampires and confused by what the lycans have to tell him, Hatori doesn’t know what his next move should be. But when one of the vampires tastes Hatori’s blood, it becomes obvious the fates wanted Hatori to travel east for a very different reason.

Hatori stood behind Kyo as he stared at the back of the man standing in the library. The tall blond stood before a table, one book open in his hands and dozens more open all over the table.

Kyo gave Hatori yet another apologetic look and then spoke. “What’s so interesting, Ryu?”

“I’m preparing for tomorrow. I’m going over lycan folklore again and looking at medical texts on vampires. There aren’t that many, you know, since the Dissolution is the only disease vampires can contract. Most of them go on and on about how vampire blood affects other beings.” Ryu finally turned.

Hatori couldn’t help but stare at his amazing golden eyes. He’d never seen a vampire’s eyes turn gold before. Ryu’s smile faded as he looked from his brother to Hatori. He seemed to realize what he’d done. “Oh no.”

“Today, Ryu. Not tomorrow.” Kyo shook his head. “By the gods, you are a thoughtless man! I’ve never known anyone so self-involved!”

Ryo dropped the book in his hands and moved to stand before his brother. “Kyo, I’m so sorry. I got mixed up.”

Kyo glared at him. “I told you last night to be ready at noon. I waited and waited, but no one could find you.”

“We’ve been over this. You always need to tell a servant about every move you make. That way we can find you if you forget something.” He sighed. “I am very embarrassed by your behavior, but that is not why I’m so angry. This time, your thoughtlessness affected others. You owe Hatori an apology. Now.”

Hatori didn’t like seeing someone, especially one of his superiors, reprimanded on his account. Though he kept his voice low and even, Kyo’s tone and manner were so authoritative that Hatori found him very intimidating. He could see why he was so well liked and respected as a leader. His kindness and compassion obviously tempered this more domineering and decisive side. Now Hatori could see why the demon threat hadn’t caused more people to flee the area. A leader like Kyo could inspire confidence in almost anyone. Hatori’s eyes turned back to Ryu as he came closer.

“Hatori, I’m so sorry. I am … forgetful.” He looked back at his brother for a moment, and then he smiled sadly. “I am everything my brother says, and I have all the flaws he does not.” He took Hatori’s hand. “But from this moment on, I’ll be close whenever you need me. I swear. He can throw me in the dungeon if I let you down.”

Kyo laughed, but he also shook his head. “I don’t think I’ll have to do that.” He touched the younger vampire on the shoulder affectionately. “You see why I can’t stay angry with him, Hatori? You’ll get used to him soon enough.”

Ryu squeezed his hand. “I’m glad, but it doesn’t change the fact that I was in the wrong.”

“I’ll leave you two to get acquainted.” Kyo bowed to Hatori and then touched his arm gently. “Don’t hesitate to ask for anything.”

Hatori bowed and then watched Kyo walk away. He liked the vampire very much. Turning back to Ryu, he smiled. “Everyone is being so kind.”

“Except for me, of course.” Ryu sighed, blinking as he seemed to consider his next words.

“I have never seen a vampire’s eyes turn gold before.” Hatori didn’t want Ryu to continue apologizing, so he made himself take the first step in changing the subject.

“I’m unique in that way, actually. My eyes are always gold, even when I feed.”

Hatori couldn’t hide his surprise. “They are? They’re beautiful.”

Ryu smiled and moved closer. “So are yours. Such a lovely blue.” He caressed Hatori’s dark hair, pushing it behind his ear. “Do you need my blood, Hatori? No one will disturb us.”

Ryu’s touch made him feel hot all over. “I will need it if you keep touching me.” He swallowed. “Your brother did explain, didn’t he?”

“Yes, he did. You’ll have to forgive my forwardness. You’re very handsome.”

Hatori thought Ryu was handsome as well, but his blood was what was truly turning Hatori on. Ryu caressed Hatori’s face and then pressed a gentle kiss to his lips. Another kiss followed, this one more insistent, and a swipe of Ryu’s tongue made Hatori yield. The kiss remained gentle, however, and Hatori returned it in kind. Their lips and tongues tangled for a long time, and Ryu looked very aroused when they parted. Hatori felt aroused as well, but he also felt confused. He wanted nothing more than Ryu’s blood in that moment, but he’d never taken blood from a vampire this way before.

This book had quite a bit of angst in it for both of the main characters. For a time, it seemed that they were never going to get it together and be on the same page to make their relationship work, but the ending was quite good. I also enjoyed the secondary characters, especially Lord Kyo&#039;s half-brother and the set-up in the epilogue for his story. If you enjoy paranormal worlds and &#039;fated mates&#039; where work is still required to make the relationships happen, these are definitely books for you.

Chasing His Mate by Marie Medina