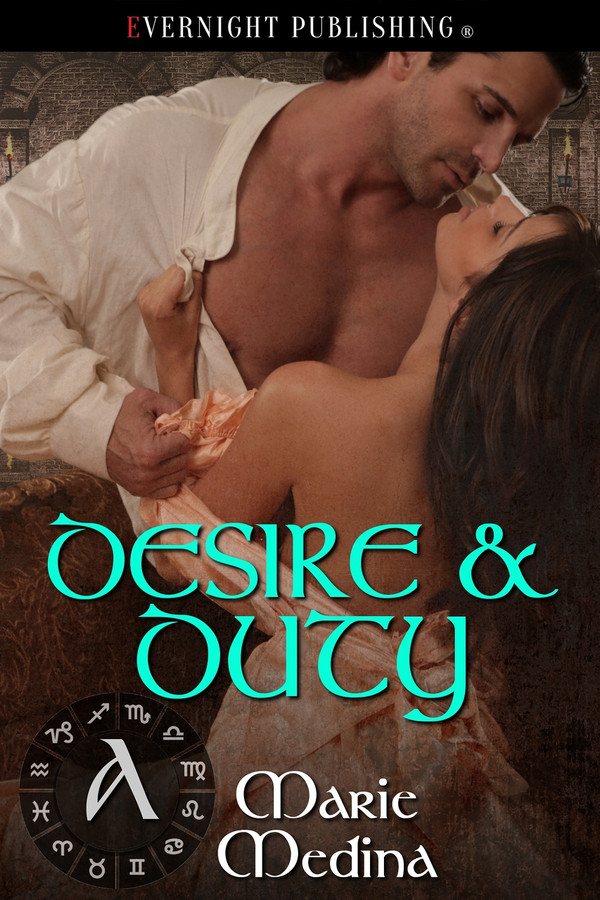 Gwynn thinks all her friends have gone mad when they begin insisting that Orman, their lord’s steward, is interested in her.

Orman’s been in love with Gwynn for months, but he’s kept his mouth shut because he fears rejection.

When it becomes obvious everyone knows about his feelings except Gwynn, he sees that he has to act. He’s always done his duty and ignored his own needs, but now that he has a chance to win Gwynn’s heart, his desire refuses to be denied.

Orman cringed when the porcelain shard sliced into his finger. He took out a handkerchief and wrapped it around his finger while he tried to clean up the rest of the pieces. He’d rounded a corner and found a vase shattered in the middle of the floor. The corridor had been silent, so he had no way of finding out what had happened. He crawled halfway under the table the vase had been sitting on in his efforts to collect all the pieces.

“There are these things we have. Brooms. Much more effective.”

Orman recognized Gwynn’s voice and froze. He moved carefully so as not to bump his head on the table. He already looked undignified enough crawling around like this. “Yes, but I didn’t have one on hand. I didn’t want anyone to get hurt so I was trying to clean it all up anyway.”

“You can’t be everywhere at once taking care of everything,” she said as she opened a cupboard in a little alcove. She returned with a small broom and dustpan and handed them to him. “Here.”

“You seem to do quite well at being just where you’re needed. Gives me something to aspire to,” Orman said. He cleaned up the fragments and looked around carefully for any he’d missed.

“What happened?” she asked.

“I don’t know. I rounded the corner and found it shattered. No one in sight.”

Gwynn shook her head. “Probably children playing. They move the fastest when they’ve done something wrong and need to get away. I’ll ask around.”

“It’s just a vase. I don’t want to get anyone in trouble.”

Gwynn raised one eyebrow. “Going soft, are you?” She went back to the cupboard and came back with a bucket before kneeling down beside him. They began loading the shards and bigger pieces into the bucket. “Best the culprit is caught and shown he or she can’t just get away with it. They have to own up to it.”

Gwynn grabbed his hand anyway and unwrapped the finger. “You’re right, but make sure you keep it clean.”

“Yes, ma’am,” he said, enjoying the point of contact.

Gwynn eyed him. “You watch that mouth. Don’t go forgetting your place.”

“My place? I thought I was above you, but I’m starting to see the advantages of being under you.”

She stared for a moment and then leaned in a little. “You know what stewards who go around seducing the maids get?” she whispered.

“What?” he asked as he leaned in as well.

She grinned at him. “What do you think? They get laid.”

Orman burst out laughing, not caring who heard him. “Where did you hear that joke?”

“I have six older brothers. Where do you think I heard it?” She came forward a bit and pressed her lips to his ear. “But you still need to watch that mouth.”

“Bit hard since it’s on my face. You may have to do it for me,” he said as he angled his head to look at her.

“Have to do everything, don’t I?” She kissed him full on the mouth and parted his lips with her tongue right away.

This story was interesting and different. A must read