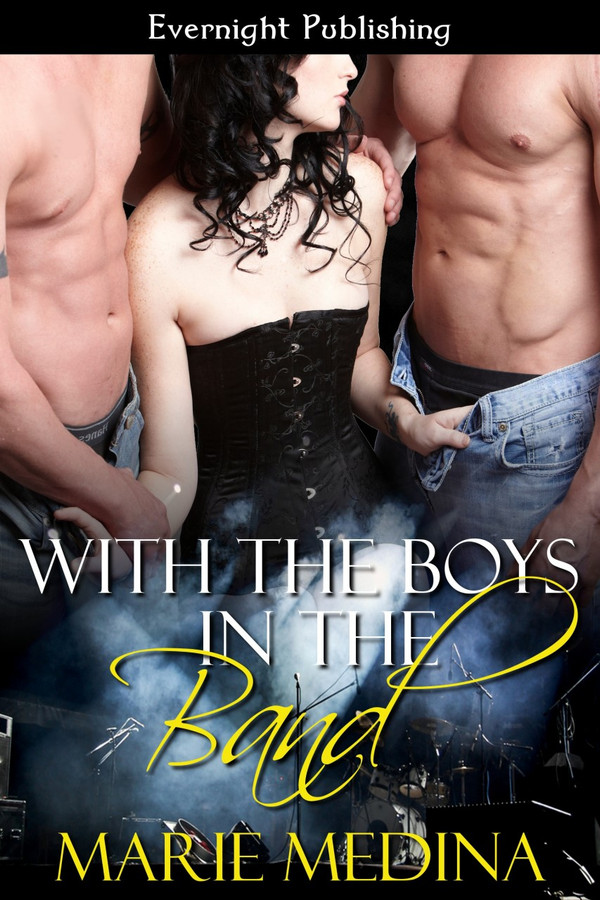 Working as an assistant for the metal band Serration is Alicia’s dream gig—a far cry from the cubicle she abandoned at her old job. She promised herself she wouldn’t become starstruck, but the band’s frontman, Vince, proves very hard to ignore. She manages to resist him on a daily basis, but soon she finds herself thinking about the keyboardist, Emerson, all the time.

The two men’s closeness confuses her a little, and Vince’s promiscuous reputation makes her wary, but when Emerson invites her to Vince’s summer house for a week-long getaway, she jumps at the chance. A single day in such close quarters convinces Alicia of one thing: these two men want each other as much as they want her. Will they only see each other as rivals, or will they give in and let her lure them both to her bed and her very willing arms?

Vince led the way out the back, wondering if he should say something first or let Alicia start. Emerson was always straightforward and in most cases preferred to get things out in the open right away, which was one major difference the two men had always struggled with in their relationship. But right now he liked knowing that Emerson had most likely told Alicia absolutely everything that had occurred that morning.

“He wanted to make sure you knew he was okay. He just needs to think,” Alicia said.

“Yep. I even asked for reassurance when he said so.”

Vince’s heart kept changing rhythms, but he tried to keep his breathing even. “Good.”

“I’m glad you told him everything.”

“It was terrifying. I’m still terrified.”

“You seem so calm. I don’t get it.” They’d just hit the tree line, and he stopped and leaned back against a large pine. “I told your guy that I love him this morning. Shouldn’t you be incredibly pissed at me?”

“I encouraged that, if you recall. He hasn’t been my guy for very long, not as long as he’s been yours.” She drew closer until she stood only a foot in front of him. “I’m the one intruding, really.”

He took in a deep breath before he could stop himself. She smelled amazing, still not like a werewolf, but something had changed. “He’s not mine, never has been.”

“I think he has been for a long time. You two just haven’t seen it.”

He blinked, searching her gaze. “You sound like you want us together.”

She nodded. Her hands came forward, teasing at the hem of his shirt. “I’ve never met anyone as easy to care for as him. I can see all the reasons you love him so much.” She slid her hands under the material, and he drew in a sharp breath. “And I’ve been fighting my attraction to you since we met. But now that I understand it, I don’t want to fight it.”

“I want him to be happy. I’m sure I could do that, but something would always be missing.”

Her fingers traced over every inch of his chest as he asked, “You’d be with both of us? You wouldn’t mind seeing me and him together?”

She tweaked his right nipple, and his cock hardened. “I’d love to see that.” She leaned up and brushed her lips over his neck. “Maybe be in the middle of it.”

He groaned and turned his head to look into her eyes. “I dreamt of that last night.”

She laughed. “I’m groping you, so you don’t need permission.”

Inching closer, she whispered, “I told him I’d be open to it this morning. When he imagined it, he got hard. The thought made him tremble.”

Vince captured her mouth then, unleashing all of his emotions. Her sweet and hungry response engulfed him. When they parted, breathless, her eyes glowed. “Run with me,” he said. “I know you can’t shift, but you can run pretty fast, I’ll bet.”

He kissed her again. “If I don’t shift, I’ll have you pinned to the ground very soon. I want to wait for him. I want both of you.”

“I don’t think we’ll have to wait long.”

He forced himself out of her arms and stripped his shirt off. When his jeans followed, she didn’t look away.

When a dream job becomes so much more, how can a girl refuse? Alicia is working with top band Serraton and loving every minute of it. The guys are flirty and great to hang out with. But when she finds out Emerson isn’t gay a whole new set of feelings burst forth. Now their friendship can move further than she ever dared hope. Add in the fact that sexy Vince is behaving oddly, in good and bad ways, and life is just about to get complicated and oh, so sexy. With the Boys in the Band is a nicely written ménage paranormal tale. I enjoyed it from start to finish. The fact the boys were in a band was a bit of a secondary feature to the story and a bit more could have been made of it if the author wanted to elaborate on the super-star status. The leading lady Alicia was a great character and I warmed to her. She was a good listener and gave sensible advice to Emerson and Vince when they had to face up to the attraction they’d felt for one another for years but been denying. I was a little surprised by the twist in the tale concerning Alicia but it did draw her and Vince together nicely, in fact so nicely again I would have liked a little more of that side of the story too. Emerson was sensitive and sweet, Vince was a bit more rough around the edges, a bit moodier, and I liked that. The other members of the band were secondary characters but worked well in the plot line. The sex was hot, whether it was m/f or m/f/m. The author writes it well, though there was one occasion I had to back up a page and check the choreography. Double penetration was happening but her butt hadn’t been mentioned. Once I figured it out though, I was good to go. Again the story could have expanded on the two guys hooking up for the first time. There is some m/m action but it’s not their first time. That is alluded to in a couple of sentence, and I’m greedy, I wanted to be a fly on the wall, seeing that, being there! But I guess that just shows that With the Boys in the Band is a good story with characters that sucked me and I wanted more, more, more. If you enjoy ménage, sexy shifters and rock and roll this could well be right up your street – enjoy.

Be My Bad Boy by Marie Medina