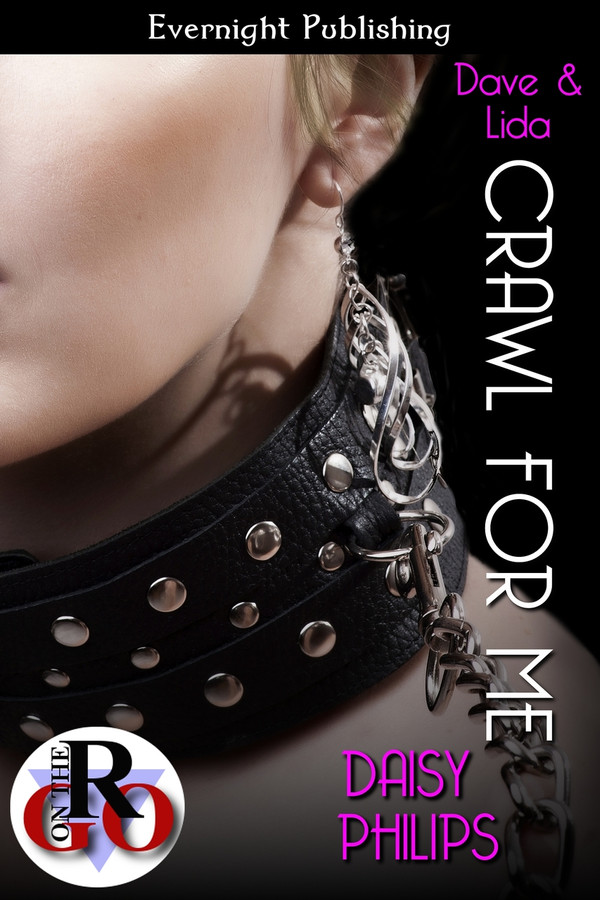 Dave McKenna doesn’t normally date his staff, but since Lida is leaving McKenna Industries, he decides to ask her out. On his way to do just that, he overhears her tell a friend that she would “crawl naked on her hands and knees, barking like a dog” to get his attention, and he knows she’s the woman for him.

Lida Lawrence is mortified when she realizes that Dave has overheard her boast and wants to take her up on her offer. She’d just been joking about being his puppy, but now that Dave wants to play, she has to decide if it’s worth it for a night in his arms.

“Seriously, Sandy.  I read this book.  Oh my God, the guy was into something called puppy play and it was so hot.  He made his girlfriend crawl around and bark and stuff.  It was so kinky and hot. I’d totally like to try it, once, at least.  But that’s neither here nor there.  I don’t have a boyfriend, and as for Mr. Sexy Pants McKenna, men like that don’t notice women like me, not even if I crawled naked into his office and barked.  I’m just one of his many adoring minions who haven’t a hope in hell at getting him to notice us.  As far as I can tell, he never fucks his staff, ever.  I know it’s a sign of integrity or something, but I wouldn’t have minded sex on his desk falling under other duties as assigned on my job description, but that opportunity is going to be gone forever.  Only half a day of work left and then I’m no longer employed by McKenna Industries.

“Well, I’ve got to go.  The rest of the staff will be back from lunch soon, and I need to look busy.  Maybe we can do lunch next week before I start at Carrington?

“Great. Talk to you Monday, Sandy.”

Lida slowly put the phone back in its cradle and turned her chair back to her computer monitor.  It was only then that she felt… something.  Frowning, she turned to her left.

Him.  He.  Uh oh!  He was standing there, leaning against the file cabinet with his mouth twisted into a wicked grin.  She immediately dropped her eyes from his penetrating gaze.  How much had he overheard?  Oh God.  Did he hear her talking about wanting to bed him?  What about the puppy play thing?  Thank goodness it was her last day, otherwise she’d have to quit because she’d be far too embarrassed to look at him again.  Lida stared at her computer screen, hoping the ground would open up and suck her down.

Dave McKenna himself walked toward her and placed a small rectangle of paper on the desk in front of her. “I would notice you, you know, if you crawled naked into my office.  But then again, so would my staff.  Besides, as you noted, I never fuck anyone who works for me.  It isn’t professional.  Anyway, as hot as sex on my desk sounds, it’s not the right venue for what I have in mind.  Let’s say tomorrow, eight AM.  My place.  That is, if you meant what you said.  Or are you all talk?”

Be careful of what is said out loud at the office. Lida Lawrence learns this all too well when her boss, Dave, overhears her crush on him. Her kinky offhand comment to crawl naked for him is too much for Dave to pass up. Before Lida knows it, she is put in a position to put up or shut up. What does Lida do? She barks. Yes, this a bit of puppy play! Lida is sexily taken in hand by Dave. Dave&#039;s sexy abuse of power at work seduces Lida into rolling over and spreading her legs like an obedient dog. For those who enjoy boss to subordinate mischief, this is a quick and light read. There is just enough boss behaving badly to stoke the fires and wet the panties. Ms. Philips does it again with her smexy tale. She takes a fetish which is a bit on the taboo side and makes it sexy fun. Whilst there is a bit of humiliation incorporated in this story, it is very light. It arouses the reader and may even encourage them to seek out more puppy play books. This erotic coupling is recommend for kinky readers who enjoy mischievous puppy play.

Dave McKenna is the owner of McKenna Industries and he is attracted to one of his employees. Dave over hears a conversation Lida is having with someone of the phone that sparks his attention. While he does not normally date employees, Lida is leaving to start a new job in the next few days and if he does not make a move soon he will lose a chance. The chemistry between Lida and Dave is blistering. The sex scenes were hot and spicy. While puppy play is not for everyone this short story does a great job of portraying this kink in a great light. The characters are interesting and appealing. At 33 pages, this book is a quick hot read.

Lida and the Deputy by Daisy Philips