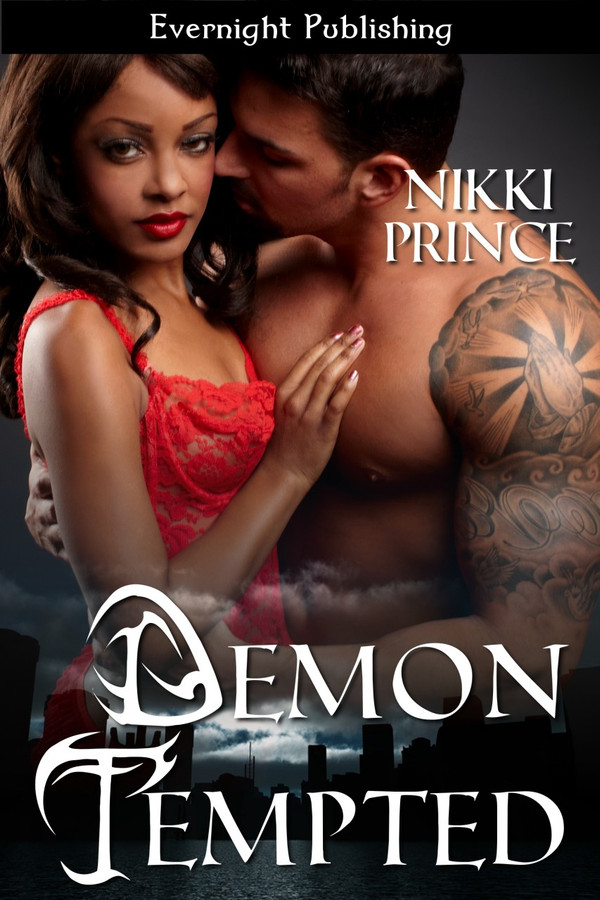 Eva Jackson has had more than her share of lifetimes to play games with other people's emotions. Now, demoted and devoid of her powers, she’s left with the feeling that there’s something more she’s missing.

Temptation was the one thing that always stood in the way.

Clay Quinones, her demon lover of old, is determined that Eva will walk the straight and narrow and learn the error of her ways. When danger looms, is it too late for these two star-crossed lovers to love one another again? Or will Eva's past make it hard for a demon to be redeemed?

He positioned himself behind her and leaned in close, his face pressed to her ear. “Any time you call my name.” He nipped her earlobe. His words seemed incomplete to her, and she had to ask.

“Any time I call your name what?”

“It will bring me to you. We still have that connection.”

As he spoke, he’d placed his hands on the front buttons of her white shirt. Slowly he freed each one from its buttonhole until he spread her shirt wide. She was on display for him, and it thrilled her. Strong, capable hands undid the front clasp of her bra, and he pulled the cups away from her breasts.

Clay was right—there was a connection. There always had been, but she was determined to break it. To have him relinquish his hold on her one way or the other was her goal. But first … first she needed his touch.

The wet heat of his tongue made her whimper as he licked across her earlobe and then down to her neck. He grasped her breasts and tugged at the nipples in unison.

“Don’t stop the show, Eva.” His command ran through her head.

“You need to stop telling me what to do, Clay.”

Though she said this, she couldn’t stop even to prove him wrong. Her thighs were already coated in her juices, and more of it was spilling out in copious amounts as she thrust in two fingers and began to finger fuck herself.

“You have a full store out there, Eva. So are you going to be able to stop yourself from coming so hard that they hear every little sound you make?”

She sobbed and bit her lip. His words affected her in a way that she was sure he wanted. The thought of being the center of attention while coming was thrilling to her. He knew her every little secret.

“I want that, Clay, but not here…” she stuttered out, and swallowing, she tried to sound a bit more convincing, “not here.”

“Then I suggest when you start coming, you press your mouth to my arm and muffle the sound.” He kissed her hard and then nipped her bottom lip. “Now back to making yourself come for me.”

“This wasn’t for you,” she gasped out as the sensations originating from her hand radiated throughout her body. Liar, her body seemed to say.

She was too far gone to argue that point with him, and his smack just sent her into a hard orgasm. With a moan she pressed her mouth to his arm to try to stifle the sound of her coming. When her body finally stopped shaking, she shuddered and opened her eyes. Clay was still looking down at her with a smirk. She watched in awe as he brought his hand up from her pussy and licked his fingers clean.

She tried to not let his words bring up the jealousies that she’d been holding on to forever. It was time to let those go, right? But the old adage of habits dying hard and all that jazz seriously did apply. She wanted to ask him why he had always seemed to be following after Lili if he adored and wanted her.

Jealousy. It had to stop, but how?

He smirked more and leaned back in, kissing her deeply. He thrust his tongue into her mouth, letting her taste her juices as their tongues dueled. Sometimes it was better to not talk. She knew that now.

Other Books in the Karmic Lust series:

This intense and sharp page-turner delves into the dark truths surrounding Eva Jackson, a demon set to receive the consequences for her past transgressions for toying with Liliana, who happens to be human. Eva is found guilty and her fate is to lose her powers and to live as a human until she has shown herself worthy enough to have her powers back. During this time, Eva is under the watchful eye of her demon lover Clay Quinones. Eva is in denial of the feelings and attraction between them. Even though Clay can get Eva wet between the thighs, she refuses to give her heart to Clay. When handsome, tanned, and ‘a voice as smooth as butter’ Oz O’Dea approaches her, she finds herself easily drawn to him. Is Oz too good to be true? Is he who he say he is? Will Eva’s involvement with Oz bring about danger to herself and others? Demon Tempted is a convincing, uncanny world of humans, demons and the co-existing of both. It also has a cast of characters so compelling, I found myself even liking the bad guy. The author made his physical traits and mannerisms so captivating, as to have even me falling for him. Even the other demons were willing to throw themselves at his feet to satisfy him. Nikki Prince’s sex scenes have a satisfying sensational climax to them. During the scenes between Eva and Clay you can feel the attraction and pull between the two. The sex scenes brought about a balance in the book. The scenes weren’t too much or too often. There is a male on male oral scene that helped build and show the dominance of one of the demons. Nikki Prince is a skillful storyteller in this spectacular mythical novel that takes you to another realm. I was so drawn into the novel that I will definitely go back to read the first book in the Karmic Lust series. I found it a little hard to follow when each character had nicknames or ‘name of old’. This book can be read as a standalone but I am sure it would be best if you read Demon Mine first. That way you as the reader will know the characters in the story, how they interact with each other, and the relationship between Liliana and Eva and why Eva is being punished. Demon Tempted has opened up a new side of paranormal for me. I suggest you grab the series and see where it takes your imagination.