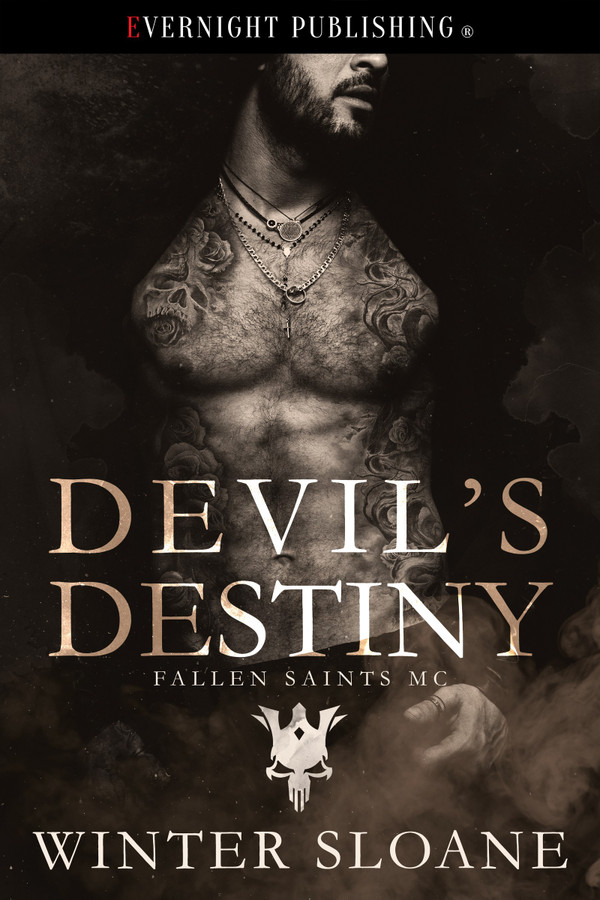 Destiny: I made a mistake and now I’m paying for it. I borrowed money from the MC to save my mom. Now I have to spend the rest of my life taking off clothes for strangers. Each time I dance, a piece of my soul dies with me. Just when I think I won’t survive this place, he arrives. Devil. Vice-President of the Fallen Saints MC. He struck a dirty bargain and now I belong to him. Hell will freeze over before I surrender my body and heart to a criminal like him.

Devil: The moment she appeared on stage, I became obsessed. Destiny’s trouble. She’s way too young for me but I couldn’t leave an angel like her in that shithole. Destiny thinks I’ll discard her once I no longer have any use for her. She’s wrong. I’ve ridden solo my entire life but I’ve changed my mind. Destiny’s not just my plaything. I intend to make her my old lady.

“You uppity bitch. My birthday’s coming up. Guess what I’m going to ask for my birthday?” he whispered in her ear. His breath reeked of alcohol. Every inch of him was repulsive.

She never dealt well with threats. Despair coiled in her insides. Everyone knew Skull had one weakness. Skull could never say no to his younger brother. Carl had gotten in trouble with the law one too many times, but Skull always bailed him out. If Carl asked, Skull would give her away without a second thought. To assholes like Skull and Carl, Destiny ceased to be a living and breathing human being. She’d devolved into a toy.

Something broke inside her then. Destiny birthed a fierce little animal since her mother died, since the day she started working in this hell on earth. Rage burned away her fear, her despair until she had nothing left.

Destiny rammed her elbow right into his balls. Carl howled. She streaked past him.

“What have I done?” she whispered.

“You’ll pay for that, you bitch!” Carl yelled.

Destiny was still in her provocative costume. Skull’s men were everywhere. The Pink Canary reminded her of a tightly guarded maximum-security prison. She’d never escape this place. A quick looked behind her showed Carl bracing himself against the wall, nostrils flaring, his gaze unfriendly.

Any second now and he’d come after her again. This time, he wouldn’t bother playing games.

Destiny didn’t see where she was going. She bumped into a wall of warm and solid muscle. Heart in her throat, she whipped her head and looked at the man she collided with. It was him. The customer whose steel-gray eyes had devoured her throughout her entire number.

Destiny couldn’t take her gaze off him either. She’d didn’t understand why her skin burned hot for him, or how he was able to mute the entire world around her. Destiny had never shown interest in a customer before. They were all pigs to her but something about this stranger seemed different.

Destiny didn’t know why she thought that because the man was also wearing a leather jacket with a patch on it. Not the grinning skull of the Skull Riders but that of another MC. MC men were no better than beasts in human skin.

He was massive, titan-size. He must be at least six-foot-six and he practically towered over her. She suddenly felt vulnerable around him. Tiny. There were streaks of gray in his short dark brown hair and short beard.

When he grabbed her shoulders and righted her back on her feet, Destiny felt less threatened by him. A little safe. A laughable thought. Men who walked through the Pink Canary’s doors only wanted one thing.

“You’re safe with me,” the stranger said.

He took off his jacket, revealing hard, corded muscle underneath his plain white shirt. To Destiny’s surprise, he placed his jacket over her cold shoulders. She didn’t understand what was happening. Who was this stranger?

Destiny has lived life with a woman of the streets for a mother, but she was the only family she had. When her mother becomes ill, she will do what it takes to save her, even take a loan out from Satan himself. In the end her mother dies, and she is left with the debt to a monster. When another walks in called Devil, is he her savior or her worst nightmare? Devil had no idea when he walked into a detestable MC to make a deal, that he would find Destiny. One look and he knows he will do whatever it takes to make her his and get her out of hell. When her past comes to call, he is positive he will never let anyone hurt her again. Destiny is unsure if she is jumping out of the frying pan into the fire, but Devil seems to be the lesser of two evils. When he gives her a choice can she actually walk away? Devil tells her he would let her go if that is what she wants, but he is almost positive he will never be able to release her because she is his. Can these two find their happily ever after, or will they both end up in hell alone? I enjoy the writing of Ms. Sloane whose heroes are brash and arrogant, but when they decide a woman is theirs there is no stopping them. The storyline grabbed me from the beginning and I had to turn every page so I can discover the ending. It is an excellent beginning to a promising series. I found the characters interesting within the story and I can see the stories of the other members will be as interesting as Devil and his Destiny.

As Vice President of the Fallen Saints MC, Devil could – and did – have any woman, any time he wanted. Rules never applied to him. But while in the middle of negotiating a deal with another MC Devil lays eyes on Destiny and instantly something different happened, Devil found himself burning for her as no other. Unable to resist, he agrees when she’s offered to sweeten the pot. Will Devil regret his bargain? Fun and sexy, I found this to be a deliciously hot short story. While the plot isn’t anything intriguing or new, I really enjoyed Devil’s strong and confidant personality. And Destiny was a vulnerable heroine who I easily related to and I adored her resilience. Having borrowed money she knew she’d struggle to repay she didn’t cave in when the situation turned nasty on her, she held her spirit and strength close to her and continued to always look for a way out, an opportunity. This fire inside her was what first drew Devil and admittedly it’s the main aspect of Destiny’s character I really related to and loved. The chemistry between them smouldered from the beginning but I also really appreciated how the author didn’t stint on the “getting to know you” time between our two main characters. This helped make the whole story – the romance and sex in particular – feel a lot more realistic and relatable to me. I really enjoyed how the author managed to balance the usual darker, slight edginess of a usual MC story with hope and some light. Often I find MC stories a bit too dangerous or violent for my personal tastes but I found this story really balanced well between the grittier aspects of real life – poor decisions, imperfect families and facing realities – with the more romantic hope that with trust and the right people life can be a dream and beautiful. I really enjoyed the slow dance between Devil and Destiny and how they came not only to know each other but trust and deeply love one another. The slow, steady building of their relationship was a real pleasure to watch unfold and I know I’ll enjoy this book again in the future. The first in a new MC series I’ll be keeping an eye out for future installments and can strongly recommend this story to others, particularly those who often don’t enjoy the darker or more violent MC romances.

This was an okay MC read. Instant love which is always hard to believe. Look forward to Bonnie and Hawke&#039;s story.

Winter Sloane&#039;s Devil&#039;s Destiny is quite the compelling story. Destiny owes the MC and Devil is going to collect. The romance is heated and quite naughty at times. Overall a solid plot and characters.

Devil never imagined his destiny would find him at a meeting with a rival MC. He knows the moment he sees the beautiful red head she is his destiny. She stirs a protective instinct in him and he won&#039;t leave without her.

Destiny is a dancer to pay off a debt but she catches the attention of Devil who is from a rival MC and about to go to any depth to protect her. Devil isn&#039;t a good guy but you&#039;ll love him. The action is non-stop and the ending is worth the wild and quite bumpy ride. I received an ARC for an honest and voluntarily review.

Devil&#039;s Destiny was a good story, the plot was strong, the story was filled with many emotions, the book was written well. I enjoyed Devil and Destiny&#039;s story, they were strong characters. Their journey was a bit bumpy but they were made for each other, their attraction was strong, they were drawn to one another. The chemistry between them was steamy, they were good together. I enjoyed this story. Thanks, Winter Sloane. Good work :)

A Quick story. It will be short but to the point. It is a instalove story but told in a way that it does not actually feel like it. I found myself wanting to revel in its simplicity. It has a good story and the characters are engaging. It is something that will be on my to reread list. This is a new author for me and I am so looking forward to more from her! I received a free copy of this book via Booksprout and am voluntarily leaving a review.

3.5 ⭐ Pretty fast pace and some steamy moments. Devils making a deal with his club and as he&#039;s in their territory he spots Destiny dancing at a strip club, already feeling possessive of her he gets a deal from other Prez guns and he gets Destiny. As for Des she only owes that MC money because her mother unpaid hospital bills kept building up. Now shes Devils girls their relationship is slow at first since she doesn&#039;t know what to do. Devils never forces himself on anyone so he&#039;ll make her a deal, but they also gotta deal with Skulls crazy brother who wants her for his own.