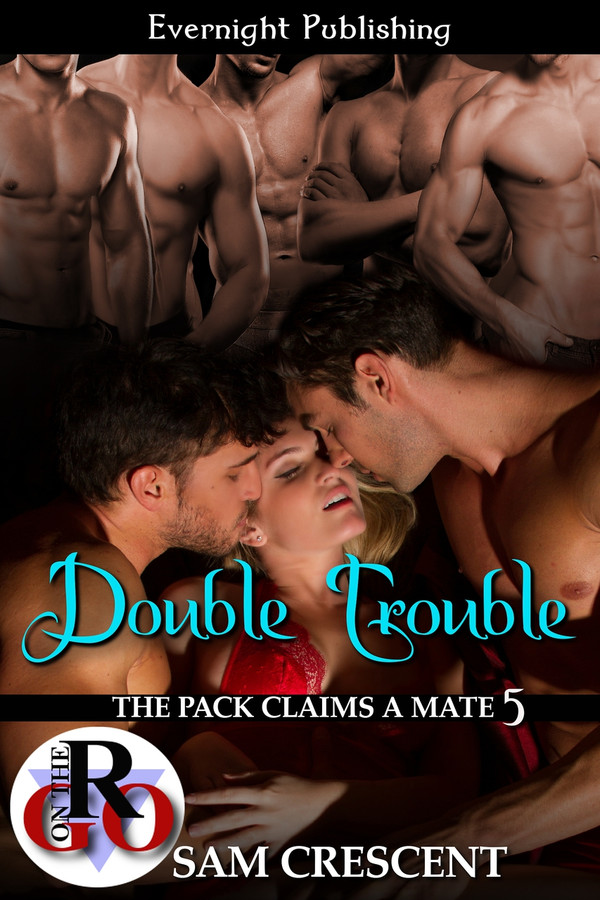 The Pack Claims a Mate, 5

Mark and Joey are twins, and they have always shared everything, sometimes even sharing their women. Still, they had not imagined they would have to share their claiming moon—but they do.

After finding out the truth that she will have to mate the twins together, Kitty is starting to get nervous. There’s no way she’ll ever be able to satisfy two men, let alone the entire pack of six brothers.

With one moon to go, and only one Kitty to go around, can this claiming really come with a happy ever after?

She held the bathrobe tight around her. Modesty was a waste of time. They had all seen her naked in the past few months. Last night they’d seen her submit to Stuart’s brand of passion.

“I’m not worried.” She pushed all of her personal doubts aside. Mark and Joey were no different from their brothers. They were the same. Both men looked almost identical, but Kitty could tell them apart. Mark had slightly darker hair than Joey, and Joey was mostly the quiet one. He was reaching out to her, and she appreciated it.

Stepping toward him, she dropped her towel, and saw the hungry look that passed across his face. “I think it’s time we stopped being nervous around each other,” she said.

“I know, but I’m going to have six men, Mark. I’m not going to lie to you. I’m worried about taking you both. I shouldn’t be worried, I know, but I am.” She ran her hands up his naked chest, relishing each smooth contour of muscle. He really was a sculpture of male perfection.

“We’re going to make it good for you, Kitty. I promise.” Mark gave her a reassuring smile, and she couldn’t help but respond to him.

“There’s no rule book to say I can’t learn how you liked to be touched or kissed while we wait for Joey.”

“We don’t have to share you until the night of the full moon, Kitty.”

“Then why are we afraid to explore each other?” She ran her fingers across his breast, moving down to tease the opening of his jeans. Glancing up at him, she bit her lip, trying her hardest to tempt him. “Do you want me, Mark?”

“Yes. More than you could know.”

Kitty took hold of his hand and placed it over her breast. “Then touch me, baby. Touch me and show me what you want.”

He took over cupping her breast. His other hand grabbed her ass pulling her closer to him. The hard ridge of his cock pushed against her stomach. She arched up, wrapping her hands around his neck.

Arousal spilled from the lips of her pussy, and she heard him take a deep inhale.

“Fuck, you smell so damn good.”

“Now that is fucking hot,” Joey said, entering the room.

Oh my! where to start! It was short, sweet and smoking hot. It was also the final book in this series and I loved the endibg and how Sam wrapped everything up nice and neat!!!

Well what can I say ... This book is number 5 in this series by the amazing Sam Crescent and also sadly the finale to it all. I have thoroughly enjoyed the journey that Kitty has shared with these six wonderful men, and each time we see a little of their individual uniqueness that makes them each earn their place in Kitty&#039;s heart and her in theirs. This book is the final as I say so that leaves only the twins Mark and Joey left to complete their part of the bonding ritual with their beautiful mate Kitty. Then at last if all goes well all of the brothers will be bonded to her the lucky woman and their curse will not affect them and they can each look forward to their futures together as a solid and united pack all bound to their mate and each other. As the timing draws closer its wonderful that although this is a shorter read there is still a lot that happens in it as in a lot of emotion and love and also some sexiness. I will definitely miss this series and hope that the author does another similar but maybe a little longer in the future. A delightful read. Happy Reading !!!

What a sweet happily ever after. I love that they all came together and made her so happy! The epilogue was sweet too!!

Well, it&#039;s and end to an era, as they say. The pack finally claimed their mate. The ending was a little lackluster, but still good. No explosive ending, no tear jerking moment..just the final claiming (2 men, lucky duck)..and then a proposal and that&#039;s it. Loved the series and once Kitty stopped whining and crying (thanks Guy) all was fine in the world. Pick up the book and the series. It&#039;s a lovely weekend read.

This is the Fifth and final book in Sam Crescent&#039;s The Pack Claims a Mate series. This book is about Kitty and the twins, Mark and Joey. Mark and Joey have shared almost everything, including women. When Kitty realizes that she will have to be shared during the last moon by the twins to complete the mating, she gets nervous. She has never been with 2 men at once. Adding to her nerves is wondering how she will keep 6 men happy. She doesn&#039;t realize how much the men already love her. Bless Mark and Joey&#039;s hearts, they try to make sure she falls in love with them too. Getting her a puppy and sharing their love for being in the gym. When the big night came, I couldn&#039;t wait to see what happen after the mating was complete. Needless to say, I loved the ending and the epilogue. I&#039;m sad to see this series end and wish we could hear about the 5 sons :)