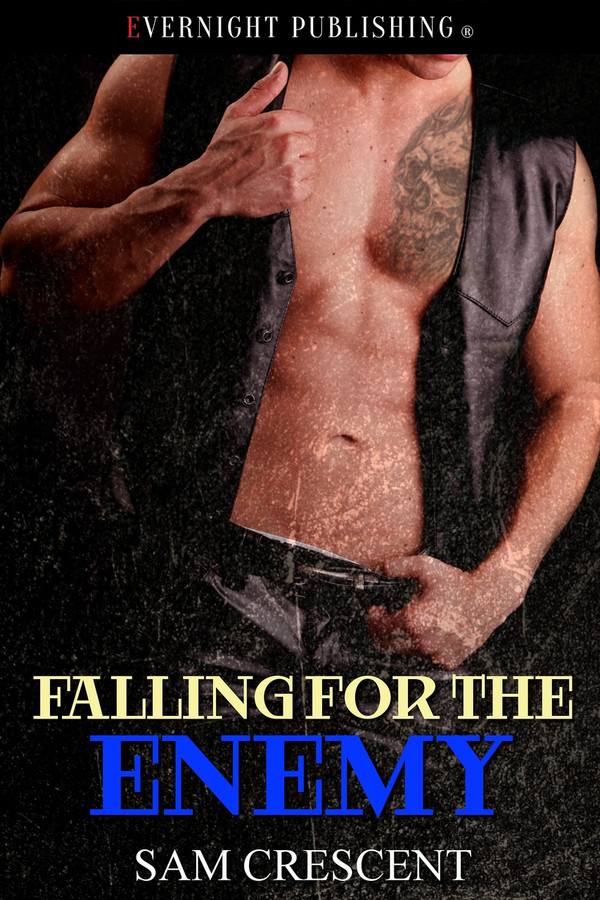 June Armstrong has hated Trey Hunt since high school. Yet, no matter how much she hated Trey, she also had the biggest crush on him. It was sick crushing on her enemy, but she got over it—or did she?

Years later, June is a success. She’s confident and loving life. However, Trey works across the street from her. He’s sexier, covered in ink, and he makes her melt more than before. To complicate her mixed emotions, he wants her badly and won’t take no for an answer.

Could falling for her enemy be that bad? Trey’s a temptation she can’t refuse. What’s wrong with giving in a little?

“What’s going on?” she asked, looking at the roses and then back at him.

“I wanted to apologize for my behavior this morning and was wondering if I could make it up to you.”

Several people entered the bakery, saw the roses and smiled. Heat filled her cheeks, and she felt it, hating the feeling instantly. It reminded her of high school. Staring at Trey all she saw was the hands pushing her books out of her grip and heard from his lips the names he called her. No, she wasn’t accepting any roses from him.

Going around the counter, she grabbed his arm. June ignored the electricity she felt from his touch alone.

“I need to talk to you,” she said, tugging him out the door. It was freezing for November, but she couldn’t feel anything past the initial pain.

Moving out of sight of the town, she took him down the alley way. “What’s your problem?” she asked, letting him go.

“There’s no problem. I’m giving you flowers to make up for my behavior earlier this morning.”

She shook her head. “I don’t need roses. I don’t need you to make anything up to me. Whatever game you’re playing, I don’t want any part of it.” The roses were beautiful. If they were given to her by a man who didn’t share the history that she and Trey shared, she’d have gladly taken them.

“I’m not playing any game.”

“All you do is play games. I’m not going to be the butt of your jokes, Trey. High school ended, and I’m back making a go of it in this town because my parents wanted me to. I didn’t want to come back here at all. Keep your roses, and keep your apology.”

She turned to leave, but Trey grabbed her arm, pulling her back.

Her back was to the wall. “I want you to have the roses.”

June fought the tears. Her mind assailed by all the memories and wishes she’d once had. There was a time when she would have jumped for joy at Trey giving her roses. No more, he forced those feelings out of her.

She refused to feel anything for him other than hate.

“I’m not that asshole who hurt you, June.”

“Prove it.” The words slipped out of her mouth before she could stop them. Looking up into Trey’s dark eyes she saw them dilate.

In the next instant his lips were on hers, stopping all the fight she’d once had for him. The roses were dropped to the floor as his hands cupped her face. She felt him pull the band holding her ponytail in place. Her curls cascaded around her face, and his hands sank into the length.

Moaning, June ran her hands up his arms and circled his neck. She pressed her body against him, relishing the touch of his lips on hers. His body trapped her against the hard wall. One of his hands left her hair to grip under her knee. He lifted her knee over his thigh and ground himself against her core.

She felt the hot brand of his cock, pressing against her.

Gasping, she let her head fall back, not caring as it hit the wall. His lips moved to her neck, kissing a path down to her breasts.

Trey’s hand fisted in her hair, tightening the strands and making it hurt. She cried out, feeling an answering pulse between her thighs.

Trey, Dale and Max were awful to Jane when they were at high school. They were the cool kids and she always had her nose in a book. Trey secretly fancied her but not understanding how he could find the &quot;chubby&quot; chick hot he hid it by making her life hell. June found her confidence at college and came back to Winter Falls to open up her bakery. Unfortunately it&#039;s over the road from Trey&#039;s tattoo shop. No longer the shy and unconfident girl that she once was she attracts the attention of Trey all over again and this time he&#039;s determined to do it right and prove he has changed. He gets his way and the chemistry between them is scorching, but with scheming parents and their match making will they get the chance to last or will they return to what they once were…Enemies? Falling for the Enemy is a great story. The background characters are engaging and have their own problems to deal with and they link well with Jane and Trey. The good girl and the bad boy storyline never gets old and this is a new twist.

June was such a brave person and showed that you need to take a chance. Trey finally decided to take a chance and show June how he really felt. It was great seeing how June and Trey worked through their past feelings. I also enjoyed Molly and Dale working through their issues. This was a really good book and dealt with a lot of issues. I liked the advice that Paul gave to Trey!

The Enemy's Daughter by Sam Crescent

Falling for the Jerk by Sam Crescent