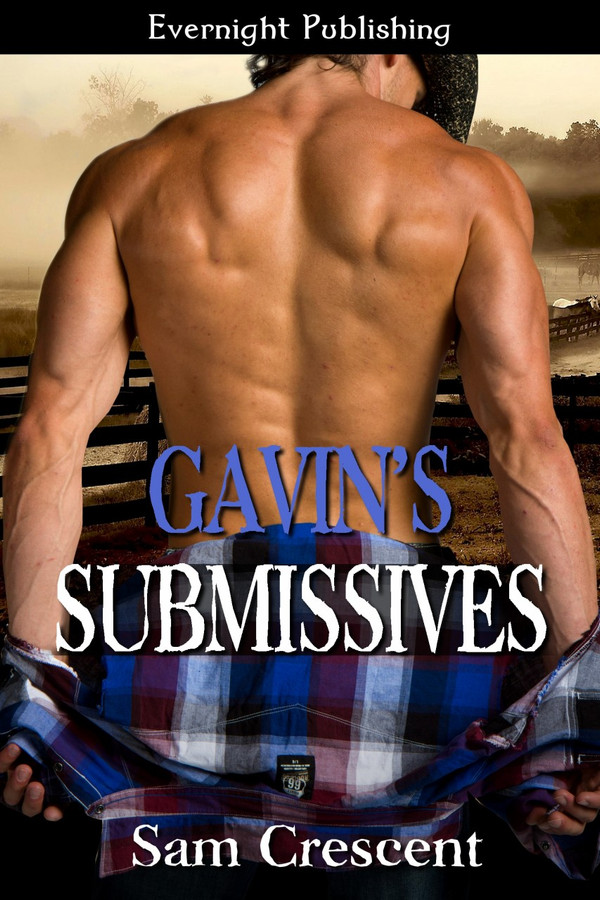 Heidi finally leaves her abusive husband after several years of unhappiness. She moves back to Creek Valley to be with her friend, Landon. However, she can’t be with Landon because he’s in a serious relationship with Gavin.

Gavin is a Dom and he doesn’t like to share. When his lover tells him about Heidi and her submissive side he’s intrigued by her, but he can live without a woman in his life, as long as Landon is with him.

From the moment all three meet up the chemistry between them sizzles. Gavin sees Heidi’s submissive side and her fear of him. When all of her protective walls break down, neither of them are prepared for Landon’s decision. How can someone choose between the two people he loves?

Can Landon fix what he has broken? And can Gavin handle having two submissives under his care?

“There, bossy. All finished.” She handed him the bowl. They walked together to the sink. He washed the bowl while she dried it and then placed the bowl with the others on the far side. Landon admired her ass. The full curves would look gorgeous in one of the red thongs he’d brought her.

Gavin’s orders came back to him. Following behind her, Landon pressed her against the fridge. The smile on her lips fell.

“What’s the matter?” she asked. She licked her lips, and taking things slow went out of the window. Landon wanted her, and waiting for her to get on the same thought process was no longer acceptable.

“I need to do something.”

He leaned in close. Heidi pressed a hand against his lips stopping him from taking what he wanted.

Taking hold of her hand, Landon pressed it against the fridge. “Trust me, Heidi. I’d never hurt you, but there is something I’ve wanted to do for some time. I need to know if you taste as good as you look.”

Before she got a chance to protest, Landon slammed his lips down on hers. The plump flesh opened up to his onslaught. He plunged his tongue between her lips relishing the taste of her. Running his hands up and down her body, Landon caught her to him. All of his dreams were being answered in that one simple kiss.

She moaned, wrapping her arms around his neck. Heidi pressed against him, and any chance of holding back was lost.

“Yes, we can. I want this, Heidi, and so do you.” He brushed her lips with his again. Touching wasn’t enough. Landon started to unbutton her blouse. He stroked her rounded stomach, moving the blouse out of the way to cup one of her full mounds. Her nipple pressed against his palm.

Heidi pushed him away. Her shirt was open with only the top button fastened. “What about Gavin?” she asked.

“If only you knew.” Landon lifted her onto the counter. “I’ve waited too fucking long to have you in my life. Derek’s a fucking idiot. The moment you told me about your divorce I was so happy. You’re mine.”

Laughing, he cupped her face, staring into her eyes. The love he felt for her was reflected in his gaze, or at least he hoped it was.

“This is crazy. I can’t come between you two.”

Opening her thighs, Landon stepped between them. “You’ve got no idea what we’ve got planned.”

He ran his thumb over her bottom lip watching her gasp.

“What part of ‘take it slow’, didn’t you understand?” Gavin said.

Landon is a man that was saved after his parents death from Gavin. Gavin is a Dom and he is bisexual. He believes the only person that he needs is Landon. Only thing is Landon has also been in love with Heidi since they went to school together. Both men were up front and honest with each other. Landon wants Gavin to give Heidi a chance and be their third person. Heidi is going back to her hometown and meeting the man she loved. She has gotten away from her husband and has just now got a divorce from him. He treated her like crap and was pretty mean to her. Now she doesn’t believe in herself and has buried herself. She wants to be safe and find someone to love her. She feels like she is coming in between the two men and for some reason she is starting to have feelings for both of them. This was a really great book and I liked seeing them realize what their true feelings are for each other. It takes a lot of work to have a relationship between two people. This book has three people. Gavin feels like he has hit the lottery because he know has two submissive’s. The ending was wonderful and I loved it. I wanted to rush along to see what would happen but I decided to take my time and read it. I will warn you that this is a book that has BDSM. That means there are some toys, anal play and hitting. It is also about M/M, and M/F/M having sex. If this is not your type of book then don’t read it. I will tell you that you will be missing a great book.

Heidi is newly divorced from her abusive husband. She was unhappy for several years but tried to stick with it until he was unfaithful. Heidi moves back to Creek Valley to be near her friend Landon. She is also working on building her self-esteem. Heidi is also a submissive even if she does not know it at first. Landon is Heidi’s best friend. He stayed away from Heidi when she was married but now he wants her in his life and his bed permanently. Landon is a submissive and has convinced his Dom. Gavin, that a ménage is what is missing in their relationship. Landon’s biggest issue is he speaks without thinking things through and as a result puts his relationship with Gavin and Heidi in danger. The chemistry between Gavin, Landon, and Heidi is blistering. The sex scenes were scorching. I loved that this book showed some of pit falls of a ménage relationship and how rocky it can be. I enjoyed seeing how all three eventually made the relationship work. I found it to be realistic. Gavin’s Submissives is the first book in the Creek Valley series by Sam Crescent. I found this book to be very well written. The main and secondary characters were realistic and interesting. I loved this book and this author. I have not found a book by Ms. Crescent that I did not like. Overall, this a great story and I cannot wait for the next book in the series.

When Landon finds out that Heidi, a young woman he loved since his younger days, is divorced and coming back to their hometown, he and his master make plans to make her theirs. Heidi is emotionally beaten, insecure, and has no idea why Gavin and Landon want her with them. As the three of them try to build a relationship, Landon makes a huge mistake that threatens everything they are building and Heidi&#039;s ex-husband follows her to town, setting up a showdown for her future. This book sets up a new series in a town where gay or poly relationships are accepted, so none of the problems come from the fact that their relationship is not the standard male/female one. Instead, one man&#039;s foolish words and the hurt he causes people he loves just goes to show that building any kind of relationship can have stumbles and trials. I liked the way Gavin and Heidi made Landon work to earn the forgiveness he needed without being overly cruel and how they were so much stronger afterwards. The only drawback was one seen in many romance stories, in that it seemed that time was telescoped to make the relationship happen faster and Heidi got over the past abuse quickly. However, it was a story that had characters that knew each other in the past, so that helped make the speed more acceptable. I enjoyed it and would be happy to read more in the series.

There was so much excitement packed into this book. Gavin, Landon, and Heidi had such a strong chemistry between the three of them. These three were so awesome together. Gavin was the take charge one and I loved how they all seemed to keep each other grounded. This was such a good book!!