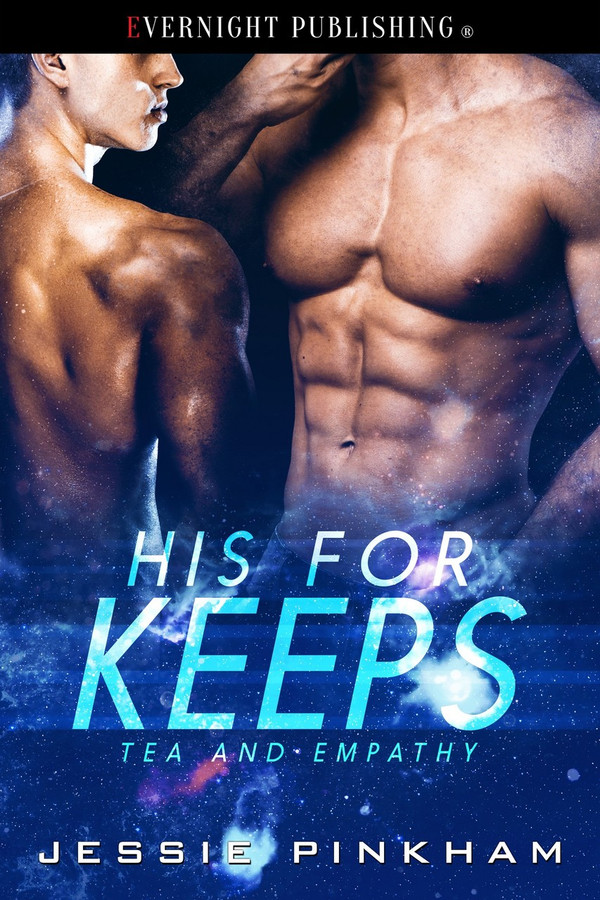 Karl has found an ideal hookup partner in Teddy. Their kinks align wonderfully, and they click outside the bedroom as well. There would be relationship potential if it weren’t for one problem: Teddy is an empath, and he’s convinced himself that he won’t need to be submissive once he bonds with an anchor.

While Karl wasn’t initially looking for commitment, his affection for Teddy grows into love, and he's ready to make the lifelong promise of being Teddy’s anchor. This sends Teddy fleeing, because he’s determined to avoid becoming the latest victim of empath abuse. Karl wants nothing more than a chance to prove that being a Dom and a responsible anchor aren’t mutually exclusive, but first, Teddy has to stop running.

Teddy had requested a very specific scenario, one for which Karl made a new purchase. He always liked adding to his collection of toys and bondage gear, especially when he got to use the new items right away.

As per Teddy’s fantasy, Karl had the sexy redhead lying on his side, head propped up on a couple pillows, wrists tied behind his back and ankles bound together. He’d spent a while teasing, and now it was time to move on to the final act, so he reached for his latest purchase. “Fuck, this is going to look good on you. Open up.”

Teddy complied, and Karl slipped the gag in. He’d already adjusted it ahead of time, making sure it would keep Teddy’s mouth open enough for oral.

Generally speaking, gags weren’t Karl’s preference. He got off on the sounds made by a sub, from whimpers to begging and everything in between, and he hated to let anything get in the way.

On the other hand, having a dick in one’s mouth already muffled any verbalization, and moreover, this open-mouth gag was a particular desire of Teddy’s. He said he wouldn’t even have to worry about keeping his jaw agape this way, and Karl liked making fantasies come true, so here they were.

He fastened the straps behind Teddy’s head and stood back to admire. “I was right. So hot. You like this? Being all tied up and helpless, ready to take my dick?”

Teddy’s nod wasn’t strictly necessary, as his hard-on made the answer obvious. It was hot all the same.

“Here it comes.” He guided his cock into the redhead’s mouth at a slow, even pace. “Damn, that’s good.”

Karl spent a few highly enjoyable minutes fucking Teddy’s mouth. He did miss the chance to pull out and get the sub to talk dirty, but on the other hand, the whole scene was pretty dirty as it was. He had Teddy tied up and wide open, ready to be used for his own pleasure.

Yes, it was undoubtedly hot, and he told his stray feelings to screw off elsewhere, because they had no place here. This was about pure carnal delight, nothing more.

He picked up his pace a touch more and in short order he was coming. Teddy swallowed like a pro, and holy fuck, he was so sexy Karl’s orgasm went on longer than expected out of sheer appreciation.

Of course, no orgasm could last forever, and he finally pulled out. He could’ve flopped on his side and done nothing for a few minutes, but that wasn’t how this scenario was supposed to work, so he marshalled all of his energy to keep going.

“Fuck, baby, you’re so good at taking my cock. You’ve definitely earned an orgasm of your own.”

Karl reached down to take the other man’s hard dick in hand. “I don’t think this is going to take very long, huh?”

In response he got a strangled noise.

“Yeah, you’re so ready. I love how turned on you get from me fucking your mouth while you’re tied up. So hot to see you get raging hard when I’ve tied you up. You did such a great job. Oh, look at those balls pull up. You’re about to come for me. Do it. Come for me, Teddy.”

Through all of this, Teddy was silent and catching his breath. When Karl was able to flop down next to him, the redhead gave him a contented smile.

It should’ve been perfect. The sex was hot, and it was always so fulfilling to take care of a sub this way. And yet, Karl’s unwanted feelings crept back in, reminding him that the expiration date was coming soon, that he wanted more than he would ever get.

After a couple minutes, Teddy said, “That was everything I’d hoped it would be.”

“Yes. I was never comfortable enough to request it before.”

Teddy lapsed back into his customary post-scene silence, leaving Karl to consider the ramifications of his statement. It was oh so clear that Teddy had issues trusting people with his desires, which made sense for an empath aware of potential for abuse. The whole situation was sad for any number of reasons.

In the meantime, Karl could give him this, could show him that there were good people who would take good care of him and meet his needs with utmost respect. Karl had needs, too. He’d learned the painful way in his last relationship that he needed to be in charge of sex sometimes, and he didn’t recommend anyone else try to deny their kinks.

The feelings were trying to return. Karl sternly admonished them to fuck off, because he was trying to enjoy a sublime afterglow until he fell asleep.

Karl knew without question that he was looking for a partner who was submissive in the bedroom and while he wasn’t sure he was ready for another long-term boyfriend, Karl was certain he wanted some seriously kinky sex. After receiving a number of replies to his online profile, Karl was curious enough to reciprocate contact with Teddy. After one seriously steamy phone conversation they’re both pretty sure the other is what they want. Can things work out between them? While this is definitely set in an alternate-style of futuristic world, I wouldn’t consider this a heavy sort of Sci-Fi story. Most things are completely understandable (like there’s no weird slang and messages/texts get sent on your watch etc) and not too hard to comprehend. Personally, I really liked this but I have a feeling readers who are really into their Sci-Fi might not find this a different enough world and perspective to satisfy them. I was also pretty happy that Karl and Teddy start their relationship pretty much immediately and the sex is both smoking hot and very quick off the bat. It’s clear that a deeper emotional connection will be forthcoming and the romance side of their relationship wasn’t left behind – but Karl and Teddy do jump into bed together almost immediately and their kinky sex is definitely hot enough for the explicit rating of the story. I was intrigued, therefore, that the fact Teddy is an Empath – a person who can pick up and feel the emotions of people in the near vicinity – didn’t even get mentioned until after the first quarter or so of the story. It’s not that I felt there was something wrong with this, I was just a little surprised by how it felt like quite a bit of the story had rolled along before this got raised. This also made me realise that a lot of the book is told from Karl’s perspective and so there was a lot to Teddy and his character that I didn’t know. This led me to a whole host of questions about Teddy and his life. I was really pleased when Teddy and Karl began talking more personally – particularly about Teddy’s particular brand of empathy – and I honestly found it both really interesting and a good, fresh kind of perspective on the whole situation. The fact it fit perfectly into what Karl was seeking in a sexual partner was slightly too coincidental, but I could happily and easily overlook this for the fact there was so much about the situation that I’d never read about before. There are two previous books in this same world – but this read as very much a stand-alone style of book – there was no mention of the four previous main characters and while it’s set in the same world I strongly feel this story can be picked up and read without anything being read prior by this author. I think this was a great story full of steamy hot BDSM sex, two very interesting characters and a fresh twist on the whole set-up of their situation. There were enough differences from a more traditional BDSM style book that I found it refreshing and it kept my attention happily all through it. I’d happily recommend this book to readers and am eagerly awaiting the next one which will hopefully come out soon.

Can a hook up ever turn into something more? Two men and one night that will change their lives forever. Karl and Teddy are perfect together but Teddy Is not sure that Karl is what he truly needs. Can Teddy get past his fears and look inside himself and what his heart wants? Karl and Teddy&#039;s story is an enjoyable read. Karl is a good man with a big heart and he is more than willing to give that heart to Teddy with not even a thought of abusing Teddy or his position. The two make a good couple in and out of the bedroom. It was nice to see Karl fight for their relationship and show Teddy what a partner he could be. Their story moves along at a nice pace and kept me fully engaged all the way to the end. The author does a good job of building this world and the characters in it.

I enjoyed seeing Karl and Teddy&#039;s weekend hookups turn into something more. Their story is a great addition to the Tea and Empathy series, I liked how Teddy differed from the empath MCs in the first two books. He really made his own rules to cope with his gift and he has me interested in how different the next empath will be in the next book. I&#039;m looking forward to finding out.