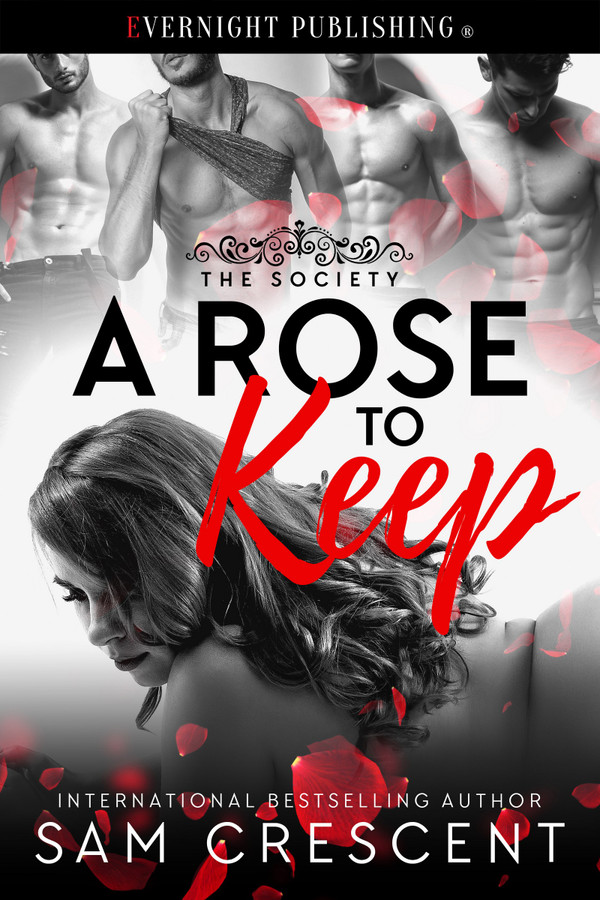 Senior year, the four Saintly Devils will present a rose to their selected. One girl who will belong to them. It sounds so far-fetched, and I’ve never believed in rumors—until they give me the rose.

Gideon, Dante, William, and Mateo. Four of the sexiest, wealthiest, and most popular guys in the whole school.
For the first time in history, a girl turns them down. That’s me. I crumble up that rose and hand it right back to them.

Only, there’s so much more at stake than belonging to these four guys. There’s no way I could have known this was set in motion long before I even knew about them.

When my choices are taken out of my hands, I have to find some way to control my life. I’m not going to be a doormat for guys I don’t like, these four who don’t know me.

But I should have known better. They don’t want me. They’re following orders. I’m part of a contract, an initiation to something far scarier. Something called The Society.

I’ve got no choice but to submit to the four Saintly Devils, to become theirs.

They promised to protect me and those I hold dear.

The light in front of the library turned off, and I watched as Sian left the building. She still wore the standard school uniform, only she conformed to the original design of the pencil skirt being below the knee. Others wore mini-skirts, trying to show off their legs, and in most instances, their panties, if they were even wearing them.

Her shirt was untucked and her long brown hair was down. I didn’t recall ever seeing her hair down. She always wore it up in a ponytail.

She hadn’t seen me and started the small walk back to where her dorm was. I closed the distance between us.

She glanced over her shoulder and released a groan. “Are you stalking me now?”

“No,” I said. The lie spilled easily from my lips.

“What? A guy couldn’t be running here?” I had changed into my running gear.

“Mateo, you never run. You refuse to run.”

Busted. I preferred to lift weights or save my energy for the field playing ball. Any other time was pointless for running.

I stepped in front of her, stopping her from moving. She glanced around, and I saw the way she shifted the strap of her bag on her shoulder. I made her nervous.

“Can’t a guy be … walking and curious about a girl?”

“No,” she said. “Not when it comes to you or your friends or that damn flower you decided to give me.” She took a small step toward me. I guessed she assumed I’d budge. Not a chance. I wasn’t moving. There was no other place I wanted to be than right in front of her. “Please, move.”

I liked her saying please. One day soon she’d be begging me to taste her sweet cunt. Until then, I was going to have to wait.

“Why you turned us down. You do realize four of the most eligible guys gave you an opportunity of a lifetime.”

She snorted. “An opportunity of a lifetime? Yeah, I guess being four guys’ bitch is just a wonderful thing. We’re done here.”

“You know we could have anyone. We chose you.”

“Then go and chose one of those girls who would find this whole experience thrilling. To be honest, I’m kind of finding this creepy.” She stood her ground.

With the tilt of her head, the uniform seemed to mold to every single one of her curves, and don’t even get me started on her mass of hair. So full and thick. Damn, I was already having visions of her spread out on my bed, me grabbing fistfuls of her hair, fucking her hard.

I bet she was a virgin.

In fact, I knew she was. Her virginity is going to be a sticky subject. Pun not intended. Which one of us would break her in?

I bet Gideon would be the one, but there was a chance she’d be scarred for life.

How did I not notice this girl before? I had noticed her, but it was more like a quick assessment. At first glance, I gave her a seven, maybe. Now as I looked at her, I know she’d rank higher.

Damn, blue balls was messing with my head.

I’d opted to not sleep with anyone else since claiming Sian was so important to all of us.

“You’re kind of freaking me out now. Can I go?” she asked.

“There’s no changing your mind?”

“I don’t even understand why you want me to change my mind. Mateo, in the years that I’ve been here, we’ve never spoken to one another. I think the most we’ve ever said is when you’re throwing insults in my direction. That’s it.”

“Think really long and hard. Believe me, you’re going to find something that says otherwise.” She pressed her palm against her forehead. “Please, move out of my way.”

“I’m not moving. One kiss is all it is going to take.”

“You do realize this is verging on sexual harassment.”

I have to say, I was worried that this would be a remake of Monster&#039;s Crew , I couldn&#039;t have been more wrong. This was such an intriguing story with great characters. As this story unfolds it leads to a heck of a cliffhanger and I can&#039;t wait to see how this concludes. This is another winner by Sam!

This was a fun book that kept me intrigued and entertained. The writing was easy for me to read. The idea of the book was good I enjoyed the mystery aspect. This book was 2

Definitely a good mystery book, but there was a few moments where I think the author should&#039;ve explained more. Whenever they talked about The Society, it wasn&#039;t really explained of what exactly it was. There was a few hints about who they were, but it still didn&#039;t explained of what The Society is. The fathers of Dante, Gideon, William, and Mateo are powerful, but they seem powerless when it comes to The Society. There was just a lot of unanswered questions in this book. I just hope the next book explains all the answers to this book.

I was just browsing more Sam Crescent books and came upon this one, I was shocked I hadn’t heard of this one. Well it was available yesterday! Once I was 25% through I was immediately bummed because I knew it would be a series and I would have to wait for the conclusion! I CANNOT wait, I have no idea how I am going to read another book until I get the next in this series! The development of these teenage characters and their relationship to each other even with the sexual tension and action I am used to in Sam Crescent books as I have now read over 20 was appropriate for teenagers! I love Sian, Dante, Gideon, William and Mateo. What am I supposed to do between the time for the next release in this series??????

Wow!!! Part one of this duet had me with my mouth hanging open and shaking my head!! Sian, Dante, William, Gideon and Mateo are pushed together because of &quot;The Society&quot;. This story has it all, along with a cliffhanger that will leave you NEEDING the next book. Luckily, it comes out in a couple of weeks. This is one of Ms. Crescent&#039;s books to date. Be sure to get it!

Holy smokes that was an awesome read that leaves you wanting for more. In a nut shell this is a RH with 4 guys and a girl, a secret society and let’s not forget the girl Sian is kick a$$. I really liked that Sian didn’t just roll over and say yes to everything but, she stood her ground. The boys do have their own personality but I wish there would have been more. It does end on a cliffhanger that you can’t wait to get. I’m really enjoying this series it’s totally a Sam Crescent book but, you can tell she did things a little different in her telling and shook things up. Can’t wait for book 2!!

Oh man on man. Where to begin! I guess start at the beginning. When I first started this book I was hooked right away. The interaction between female character and the guys was right away. Sam Crescent knows how to write a book. And I&#039;m excited for book 2!!! Thank you Sam for writing books so enticing I read this in one day!!

Keep Her From Harm by Sam Crescent